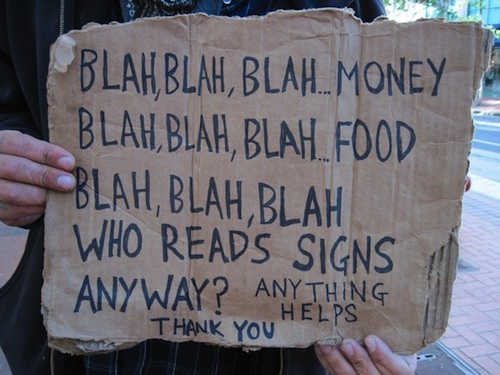 It must be – we have sprouted a new crop of English speaking beggars on the main street in Bergerac.

Impeccably ripped jeans, regulation dreadlocks, and each accompanied by a well fed dog and a large hat for donations.

Have the dogs come from England with them? Did they skimp on the several hundred pound cost of having them chipped and vaccinated so they can go back to England at the end of the season – or is there an agency just south of Calais that has a thriving business in loaning out suitably winsome strays – to be returned at the end of the begging season?

Hark hark the dogs do bark
The beggars are coming to town
Some in rags and some in jags
And one in a velvet gown.

And incredibly early this year – the very first You’d’vethought Bird.

Could be that bergerac is full of rich middle class brit tossers who have
nothing better to do with their money. Wanking francophiles give me your
euros! Blah blah.

Anna; I think this might be the answer why you have such a fresh crop of
English speaking hippies;
http://www.independent.co.uk/news/world/europe/hippies-head-for-noahs-ark-queue-here-for-rescue-aboard-alien-spaceship-7584492.html

Gosh, what a good idea. This would suit one of my sons down to the ground.
He’s already got the dreadlocks, the beard and the ripped jeans, although I
patched those the last time he was here. But no sweat, I can always take those
off. And he can borrow my dog. Parfait.
And at least I won’t have to keep
him.

PS. How do you say in French, “He is nothing to do with me?”

Merci Beaucoup. I find that I already knew that, if only I had paused
for thought.
I think I got carried away with the amount of money he
could earn for doing nothing much at all.

PS. Do you think his sign would be better in French? At least in that
case people would know that he’s nothing to do with me.

I, for one, am delighted that they are cluttering the place up over there,
rather than ‘over here’!

One really should not complain, you know, they are exporting their skills
to Europe. Who knows what might happen, with a demonstration of such marked
business ‘nouse’. These guys are leading the way for the UK…

Heaven knows, we’ve got sod all else left to export!

Hereabouts the daffodils usual herald the arrival of the pi…sorry, the
culturally undervalued nomadic travelling set.
They stay for a week or two,
doing various installations of performance art for the old folk, usually spray
tarmaccing, or the legendary mime of fixing the non-existent slipping
roof-tile, then they’re away in the night.
Oft-times, as a thank you,
they’ll leave little Tracey Emin style gifts around the area for the locals to
remember them by.

Maybe the beggars have been given free tickets to your neck of the woods to
stop them drunkenly wandering into the Olympic Zil lanes or upsetting the
Queens jumble sale this summer?

As for the Who’dhavethought bird, they don’t generally migrate as far west
as Vancouver Island, although I do remember them in their native habitat.
Shoot on sight seems to be the only real option.

Anyone notice how it’s only Asians selling the Big Issue now? I wonder what
happened to all the white homeless people who used to sell it?

They are in France with their big hats and dogs.

Frankie the man with a permanent blindfold on – mind the lamp posts
Frankie boy you might walk into one and end up with your eyes open.

Well we seem to be having the weather for it here in old Blighty. I’m
outside in a t-shirt.