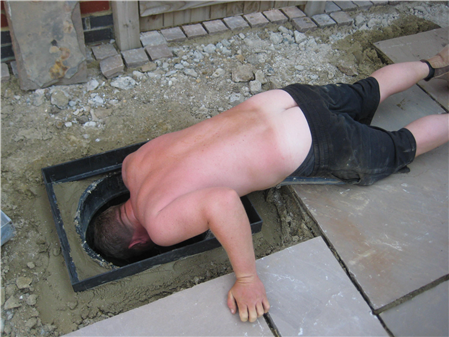 Along with many commentators over at Inspector Gadgets blog, I had been wondering what the Police Deaderation were up to, apparently remaining silent and compliant as a corpse whilst the rank and file who paid their wages were slated as overpaid, over pensioned, Blobby Bobbies. Why weren’t they challenging the findings of the House of Winsor and its ridiculous survey ‘proving’ that 75% of policemen waiting in a queue to get advice on being overweight meant the 75% of policemen were overweight? Why weren’t they challenging the ‘diet’ designed to cut the numbers of their membership?

The answer may surprise you. They appear to have been reincarnated as the Obesity Police.

Instead of busying themselves defending the size of their membership’s wage packets, the illuminati of the Deaderation were fully occupied fretting themselves silly over the expanding waistlines of Polish and Romanian construction workers on the Olympic site. No, this is not a joke, nor is it April Fool’s Day.

All last week the Police Federation were hosting, presumably at their members expense, a conference on Health and Safety for the Olympics Delivery Authority, which dourly concluded that 28% of builders were obese…and that the best way forward was to flog them cheap Scottish porridge for breakfast. Given that anything up to 70% of the workforce is migrant labour, I hope one of my Police commentators will be able to explain to me exactly why the rank and file Police are contributing union fees in order to answer the plaintive plea from Romanian hole diggers of ‘does my builder’s bum look big in this’?

I don’t often resort to bad language – but ‘What the fu*k has this got to do with the Police Federation? Have they nothing better to do?

75% of them over weight? And there was me thinking that only a third of ‘em
was lazy.

“Sorry, chaps. The country’s skint. You’ll have to get by on less, I’m
afraid.”

The council seem very keen to not use brownfield sites for building for
some reason and very keen to push for planning consent elsewhere.

It is very evident that it has nothing to do with the Police Federation.
What they should be doing is to stop waisting (pun) the rank and files’
contributions on fat immigrants and get down to exposing the misleading
sound-bites trotted out by the Politicians, the Beeb and theHome Office who
are looking for ways to justify cutting Police budgets and attacking the pay
structure. They could also look at using the ” ” ‘uman rites act” for the
benefit of their members in pursuing a right to strike. That would worry the
proverbial out of our lords and masters.

“waisting (pun) the rank and files’ contributions on fat immigrants”

Superb – why didn’t I think of that!

When the Police start policing in accordance with Peelian principles, I
may regain a scintilla of sympathy for them. Right now, they deserve all
they get for kow towing to all the flavour du jour policies and nonsense
they pursue.

If they’re looking for ways to justify cutting Police budgets, they could
always fall back on using the bald truth.

“Sorry, chaps. The country’s skint. You’ll have to get by on less, I’m
afraid.”

“…but ‘What the fu*k has this got to do with the Police Federation? Have
they nothing better to do?”

They are probably assessing the impact for when nanny changes the law and
the police start arresting people for being fat in charge of a bigmac.

To work out that 28% are obese that means someone had to weigh &
measure the height of the workers. Even then “obesity” is meaningless if they
used BMI (which everyone does) if your workers are over 2m tall then BMI is
incorrect.

If all the workforce had normal levels of body fat, were over 2m tall, and
had a muscular build they will all be “obese” using BMI.

Or did someone just look out the window and make a guess?

“…for when nanny changes the law and the police start arresting people
for being fat in charge of a bigmac.”

What with that and arresting people for ‘saying mean things on Twitter’,
they’ll be run off their feet and so lose all that weight, won’t they?