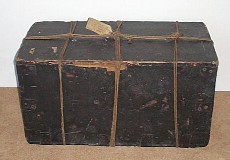 Let’s see how good your memory is! “War, disease, crime and banditry, distress of nations and perplexity will increase until …”

If you were a connoisseur of 1960′s and 1970′s Fleet Street newspapers, you will recognise that as the threat that would befall the nation if the Bishops didn’t find 24 virgins to accompany them on a mission to open a certain box.

Yesterday was the 198th anniversary of the death of Joanna Southcott;  to some a deluded charlatan who probably suffered from an ovarian tumour, to others a visionary who heard the word of God and believed herself impregnated by Him at the grand old age of 64.

Joanna lived with two early feministas who vouchsafed that no man had ever approached her. So convinced were her supporters, that when she failed to give birth before her death, they cut her body open in an attempt to find the long awaited Shiloh. There are still some to this day who believe that Prince William is a direct descendant of this Shiloh wot wasn’t there in the first place….extraordinary.

Joanna may have died, but her support lived on. Impressively so in the form of Gertrude Blanche Hallwood, who renamed herself  ‘Octavia’ and collected about her person 12 female disciples. Octavia had the wit to turn her beliefs into a charity – hence the Vat free advertisements that used to appear, financed by the multi-million pound assets of the charity – the Panacea Society. The Panacea Society may or may not actually possess the true words of Joanna – they have a box which they claim conceals her writings – but then again, so does the Joanna Southcott Society.

In 1927, a psychic called Harry Price claimed to have the box, or yet another box. He didn’t dare open it, but x-rayed the contents which proved to be a lottery ticket (winning numbers or not?) and a horse pistol – presumably for the Bishops to shoot themselves with.

The Panacea Society has flourished.  They are based in Bedford, which they believe is the Garden of Eden where life began 6,000 years ago. The purpose of the society is to protect the faithful on the last day.  To this end they have bought  some 25 properties in Bedford, to house supporters and the 21 or 24 (depends on who you read!) Bishops and the 21 or 24 Virgins who must pray for 7 days and seven nights before opening the box.  18 Albany Road is where Jesus Christ is supposed to reappear in 2014. There is no shower in the house for ‘He will have a radiant body and won’t need it‘.

‘Only Bedford will survive the apocalypse’.

They fell out with the Charity Commission in in 2001 when it was discovered that the houses were full of valuable art and antiques donated by wealthy supporters – the Commission felt that because they were doing nothing with these valuables, they were not fulfilling the aims of the Charity. It took five days to auction off the worldly belongings of those who had donated them as a condition of joining the society. The five remaining supporters are now believed to be in possession of a cash fortune of some £15 million. None of which they have to pay tax on.

And still they wait patiently.  The Society’s Secretary writes to a selection of bishops on a regular basis, inviting them to save the world and themselves by opening the box – but they always decline. ‘Some of the replies are quite rude’.

‘The contents of the box would reveal to an astonished nation the means of saving the country and would benefit the common weal.’

Your best guess as to what is in the box?

And I will open it.

As a Bedford resident I have (of course) special insight (durrr!) it
contains a piece of paper with:

The completion date of the last bit of the North South bypass – a mere 2
miles of road that will actually save motorist about 25 mins of stop go agony
as they are forced to negotiate the town centre , every short duration 4 way
traffic light in creation and filter over the only river crossing left open
due to the damn St Mary’s roadworks!

No. But ‘Fortean Times’ has covered it!

I wouldn’t mind 15 million tax fee myself. All I’ve got to do is think of a
charity.

Recipes for nourishing soups for the poor?

The box contains the key to all innovation…….http://www.youtube.com/watch?v=KxaWvJ-ziXA&feature=relmfu

A piece of paper with the word “pwned” on it.

The clockwork prototype of the Rampant Rabbit ?

Is that a wind up?

A letter from King George telling them they were even more squirrelly than
he was.

I haven’t forgotten, Mick, I am struggling with almighty software
conflicts at the moment that are taking every second of my non writing time.
Back up of outlook 2003 wont load onto copy of 2002 currently installed so
only email on the iPad, Rss feed still refusing to load into brief,
accounting package has been changed so won’t load backup, I’ve had to set up
the whole thing from scratch again, passwords to every Bally thing were
stored in outlook……so haven’t got them either! By the time I’ve written
something every day and spent a couple of hours trying to fix the latest
conflict…I tend to collapse on the sofa and try to forget it all! humble
apologies, it is sitting in front of me, I’ve even managed to buy the jiffy
bag for it, I just need to write your address on the bag and queue up in the
post office…..maybe tomorrow!

Willy warmer..coming in a jiffy… Matron!!

Apologies: you have me wrong here but I can see how it looked. My mind
was more on bishops and virgins but come to think of it there might be a
few unsavoury scraps of doggerel in there too.

As she was supported by early feminists and seeing Aelita’s comment on your
“Quiet Man” post, my guess is that the box contains a Hobby/High Horse.