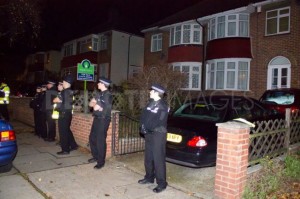 I had deliberately stayed away from this story. Something about the age of the child and the nature of the injuries made me very cautious. It was fairly obvious from the early twitter comments that there was a lot of knee jerk reacting going on/about to occur.

If it was true that the infant had been raped, and if it was proven that a named person was responsible, than all the opprobrium in the world heaped on their head would not be sufficient. Would I stand in the way of a mob planning to pull them limb from limb? Probably not. No. Definitely not.

Within hours the Tweets were that the infant had died, and the ‘arrested persons’ had gone from being ‘child rapists’ to ‘child murderers’. A mob gathered outside first their house, then the house of the grandparents, where at least one of the arrested persons were supposed to be. Police reinforcements had to be called in to deal with the increasing threats of violence towards the occupants. An ugly situation.

Taking several steps back from the scene – consider the following: Nobody had been charged, let alone found guilty. Two people in the same house as the infant had been arrested – and released on Police bail which they are expected to answer today. We don’t know whether anyone else was alleged to have been in the house when the child was injured. We can presume they were not in the house when the police arrived, or they would also have been helping the police with their enquiries.

The child has many injuries,  a multitude of broken bones, and has suffered a heart attack. We don’t know how – the police do not know how. That much is agreed. However, since only a man can be legally capable of rape, and since the infant is male, this is being described by the foreign media as a ‘gay rape’; it is taken as a ‘given’ that such an act occurred. That is speculation.

It is speculation which moved this story from being yet another bitterly regrettable tale of violence towards a helpless infant, into one of world wide interest. It is not, yet, the ‘open and shut case’ of a one month old baby raped, and the perpetrators arrested and released – with mob violence called for to act where the police do not. The Police do not yet know what caused his injuries, nor who.

Chief Superintendent Neil Jerome has given me this quote in the last few minutes:

`Due to the baby’s tender age and the medical care he is currently undergoing, it has not yet been possible to carry out the relevant scans and assessments for the police investigation. The baby’s well-being is our top priority, and once it is safe to do so my officers will continue with this aspect of the investigation to find out how the injuries were caused and whether criminal offences have been committed.

`Two people who were arrested in connection with this incident remain on bail whilst the investigation continues.

Quite apart from the obvious danger to a ‘fair trial’ – which is the right of everyone in this country, however heinous the charges – being put in danger by the amount of naming and shaming that has gone on in Facebook and other social media organs; quite apart from the dangers of media falling into the Chris Jefferies trap yet again, what really concerns me is this:

‘Somebody’ put that information into the public domain in the first place. That somebody was obviously not a member of the public – had there been anyone else in that house, they would also have been arrested. So the ‘somebody’ has to be either police, or other emergency response staff, such as ambulance, or perhaps a member of social services.

Rather than Lord Leveson chasing Guido round the block for publishing information that ‘Campbell the Mouth’ had already sent to journalists, should he not be pursuing this case?

Whatever the truth behind this story, and I am not in any way defending those who abuse a child, somebody in an official capacity put the trial of possible perpetrators at risk, and released inflammatory speculation to the press or social media which could have resulted in innocent people – I am thinking of the grandparents in particular here – at grave risk.

Either they simply cannot be trusted with information which should have remained within the enquiry team – or they did it because they knew they would receive money for the tip off.

That warrants an enquiry.

Amie, thankfully there is no need to R.I.P as the brave baby boy is still
fighting…….http://www.bbc.co.uk/news/uk-england-kent-16176869

he passed away at 6 oclock this morning

You are confusing two separate cases with each other. As of 4.30pm today
the police in Gravesend confirmed, as Anna wrote, that this baby was alive.

The 4-month old who is believed to have died is a case of head injury.
Alleged head injuries to infants are an extremely controversial area of
prosecution. Previously it was claimed that these injuries must be evidence
of abuse but that is disputed with other experts claiming that the injuries
can arise purely as a matter of bad luck and for reasons not yet
understood.

As the 4-month old has only just died, the autopsy has yet to be
performed so any statements must be pure speculation.

Prosecutions can be extremely controversial. For example, the case of
Rohan Wray and Chana Al-Alas was today formally dismissed, with the judge
directing the jury to acquit.

Wray, 22, and Al-Alas, 19, of Islington, were charged with murder and
causing or allowing their son’s death. Jurors had been told Jayden had
suffered severe head injuries and brain damage. But today they were ordered
by the judge to return not-guilty verdicts.

The baby was also suffering rickets, which is often caused by vitamin D
deficiency, creating brittle bones. Some experts believed he died from
natural causes and nearly 60 called to testify could not agree on what had
happened.

Outside court, solicitor Jenny Wiltshire said: “Chana and Rohan can now
be allowed to grieve for the tragic loss of their son they loved and
cherished. They have been through two-and-a-half years of hell. They were
prevented from comforting their dying son or attending his christening. The
real criminality is that if money spent on this case had been directed to
fulfilling the 1991 directive that breastfeeding mothers be given vitamin D
supplements, the death would not have occurred. Rickets, which is now back
to epidemic proportions, would have been wiped out.”

With a result like that, the CPS must now be asked why they brought the
prosecution in the first place.

Injuries do not imply inflicted injuries. Some injuries are a result of
accidents, bad luck and undiagnosed medical conditions.

“…and nearly 60 called to testify could not agree on what had
happened.”

Is that a misprint? Sixty?!?

This is actuly sick, I am currently pregnant my self and do not understand
how the mother can say she was ment to be looking after , she would of known,
there is no excuse at all she would of seen the injurys whilst takin care of
poor , police are aresting people who are tryin to stick up for this poor
baby, mother and farther both deserve the death sentance not a prison sentance
wich will give them every thing they need they deserve NOTHING!! R I P Baby …
thinking of you

Really? I didn’t know we had any such law on the statute books. Maybe
they are arresting people for obstruction and criminal damage, instead?

No matter what the mother says she should of been looking qfter that baby
every second of every day, so theres no excuses for why this happened, nothing
makes it right!! R.I.P max u deserved better than them!!

*sighs*
Can you not read Kerry? There is no ‘R.I.P’ appropriate, at
the moment. The baby is in a stable but critical situation.

Not the baby referred to in this post. It is another four month old
child who has died.

Twitter and Facebook are simply modern iterations of an old problem: rumour
and gossip spread, a mob gathers, a human being is injured or killed. The
human condition is the same – the difference is that modern technology spreads
the rumour further and faster. The lynch mob has been around a long time.

Twitter eh, chalk another one up to the Cyber curtain twitchers.

Many of these sad and tragic cases have so many ins and outs, it really is
best to let the police investigate and gather evidence– AnnaR rightly points
out the Chris Jeffries case. Should the police gain enough evidence to
prosecute and secure and conviction, then the guilty party wont get a nice
time in prison— rough justice usually occurs and rightly so — If you carry out
an act so heinous that you make yourself a target of hate from other criminals
you get what you deserve— the legal phrase Res Ipsa Loquitor maybe sums it
partly up. The other thing is the media can ” prejudice” a fair trial— now if
a guilty person avoided conviction as the trial was abandoned because of
prejudice — this would be terrible

“‘Somebody’ put that information into the public domain in the first
place.”

It would have been reported as a news item, surely? The events leading to
the naming of the alleged perpetrators having snowballed from there.

Firstly, very good article. As you say, Anna, there is definately a lot
more to the story than the media makes out to be.

Julia, the reporting would likely have just mentioned ages and area.
Someone has gone the extra step and identified the people involved. That is
the person who need to be investigated. They might not have reported it to a
journalist, but to friends and family who then passed on the message. But
they are still acting immorally. The journalists might initially have been
reporting the crowds gathering but they aren’t helping the situation.

Julia, somebody used the phrase suspected rape, that didn’t come out of
thin air. It was that phrase that made the story fly.

The official line has been ‘injuries consistent with…’ So,
clearly, it’s being officially considered.

And I suspect that what made it ‘fly’ was the release of the (presumed)
parents on bail. That, coming so soon after #racisttramwoman getting
banged up ‘for her own protection’ didn’t sit right.

And nor should it.

Sorry but at one month old … the mother should know who was looking after
the baby if it was not her …. simple lie detector analysis should help.

We don’t use lie detector analysis in this country.

Anyone who knows how they work can con lie detector tests.

Polygraph operators are, according to proper double-blind testing,
better at detecting lies if they are using a box with random responses
rather than an “operating as designed” polygraph.