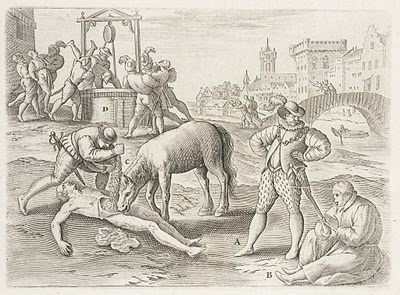 When the Spartans threw the envoy of a Persian King down a deep well, they set in train a desire to protect envoys from malicious harm that has resulted in the present system of ‘diplomatic immunity’.

In all seriousness, the system has far outweighed its usefulness. We no longer need to send envoys through dangerous terrain on horseback or foot, dodging Spartan wells – we have modern methods of communication, and diplomatic immunity is plagued by abuse.

I was minded of the £5 million in congestion charge fines currently owed by the US Embassy – they consider this a tax, and as such ‘punishment’ which they should be immune from – when I read today that they have finally agreed to pay the $240 VAT bill on their new glass embassy at Nine Elms. This has been a two year stand off,  had they agreed in the beginning, their bill would have been a mere £50 million!

This isn’t what diplomatic immunity was supposed to ‘cure’, and embassies world wide now amount to little more than an expensive drain on resources and a cheap hotel for randy Andy as he trails the world’s golf courses.

As a small aside, I was told yesterday that when Robin Cook turned up at the Polish British Embassy many years ago with his secretary Gaynor and demanded a double bed for the night, he was told in no uncertain terms where to go, and he stormed off back to Britain in disgust. At least some Ambassadors have old fashioned standards!

Whilst we are kicking out the Iranians, let us denude ourselves of all foreign embassies, and withdraw all ours. Wikileaks proved that Ambassadors know perfectly well how to use e-mail……

Can anybody put a figure on the amount we would save?

Throwing stuff in wells was severely frowned on in those days.

Quite right Anna, why do we need all those diplomats when the lovely Cathy
Ashton gives every European nation worldwide representation?
By the way,
what’s that horse doing in the picture?

I had noticed the resemblence of the noble lady too. But then I see it
was the illustration to which you were referring….

Well, bestiality, necrophilia & oral sex all in one woodcut. They
certainly had fun in mediaeval times!

This made me giggle:

At least I hope it does. I assume embassies fall under Foreign Office.

If embassies existed purely to facilitate government-to-government
business, there’d be some validity to your argument, Anna, but there’s a great
deal more that an overseas mission undertakes.

That would be spying, then?

Ha ha – I had in mind more, knowing of and keeping in touch with
opposition politicians who might come to power and other influential folk,
also commercial relations after a fashion, a bit of consular work here and
there a touch of cultural activity with the British Council -who
knows?

As well as traditional values the Poles do have a sense of humour.
They
were likely to have said “Yes, we give you double bed, but we put nun in
room
as chaperone”.

I can hear the jets of steam issuing from Charles Crawford’s ears even as I
type…..