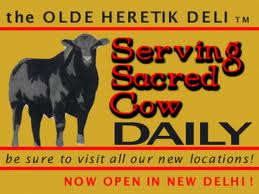 Taking an autumnal Sunday afternoon stroll through the Blog heartlands with my trusty keyboard trotting alongside yesterday, I managed to put up an entire flight of feministas – Cor! Feathers everywhere! I narrowly escaped being tarred as well.

I had only just ventured back on the road this morning, and what do I see lumbering unsteadily towards me – if it isn’t another sacred cow – two days in a row, is this my lucky week or what?

This one was just emerging from the pages of the Guardian, a sacred cow of colour judging by the author’s picture, possibly even a Muslim, since we are about to play victim poker. (10 points so far)

I would posit that there is an emerging consensus from the Guardian’s pages that crimes against property are to be positively encouraged and definitely never punished, whereas the crime of offending someone is so heinous that it is to be held up as an example of severe wrong doing.

Young Omar Ibrahim, for it is he who speaks, will ‘be in jail’ by the time you read this, he tells us. Yet before he gets halfway through his second sentence, he wails: but I have ‘offended no one’.

Poor dear love, he has taken such care not to offend the feministas, he subscribes to all Our Harriet’s dictums on gender equality, diversity, and the general malaise common to all white males – yet still he goes to jail! Oh cruel world, not yet totally fashioned to Marxist principles.

What could he have done? My, my,my.

A joke shop smoke bomb – how could anyone have been stupid enough to take that seriously? Surely they noticed the ‘joke-shop’ label as it flew past them?

And ‘found on the pavement’ – not even his own smoke bomb, ‘somebody else’ had put it there and left him just a victim of circumstances, lured into criminal behaviour. Can we award another 20 points for that? (30 so far).

Not only, but also – he couldn’t even throw it very far!

“Not least because my throwing shoulder has been dislocated more than 40 times as a result of epilepsy.”

Oh, have another 50 points for disability discrimination!

How could this man have ended up in jail?

“Nevertheless, despite my personal circumstances, I was convicted 11-1 of violent disorder by an all-white jury at Kingston crown court.”

“We should all be worried: my heavy sentence, the first of protesters from recent marches to plead not guilty, is indicative of the way in which the English police, courts and government are heavily criminalising those who step out of line, however proximate that line has become.”

Heavily criminalising those who step out of line? – yesterday, this same paper was carrying a piece advocating that the police take ‘seriously’ as evidence of a threat of rape, on line commentators who use misogynistic language towards the darlings of the feministas…

Omar asks that “we think seriously about the kind of government and legal system that believes the only way to deal with dissent is to put it behind bars”.

Indeed, but that only seems to apply to crimes against property that the Left support – occupying St. Paul’s, defying planning legislation at Dale Farm, they are only too quick to applaud legislation to deal with dissent that they dislike.

Julia Hobsbawm, yes her, has come out of her cave this morning to add her voice to the on-line chorus of ‘injustice’, as sung by the coven of journalists who claim to be especially subject to ‘threats of rape’…

“Laurie Penny wrote in an article in The Independent that “an opinion, it seems, is the short skirt of the internet. Having one and flaunting it is somehow asking an amorphous mass of almost-entirely male keyboard-bashers to tell you how they’d like to rape, kill and urinate on you”.

Julia’s solution – the final solution, is to silence those commentators whose views she feels have no value –

“We don’t need the fatuous or the gratuitous.”

The first casualty will be the ‘anonymous commentator’ – in future you would have to call yourself Fred Smith or similar in order to be allowed to have a viewpoint.

Who is to decide on the fatuousness of a comment? Will the lone reader of the Guardian who thinks men get a raw deal too be condemned as fatuous?

“Isn’t it time the media groups set out to read and select lengthy reply pieces or unsolicited comment to aim to publish them and encourage new talent?”

Vetted comments! I knew they would be along shortly – only those who hold views in agreement with the author permitted.

(not the end of debate here, you can continue to amuse yourself, but on the small matter of equality I do recommend you watch this illuminating video first…gender inequality seems to be going the same way as racial inequality, some pigs being more equal than others)

Crikey – am sorry but that video is really annoying. I am perfectly able to
make my mind up about what’s being said without the cartoon pointers…. sheesh.
And whether feminism is the root of all evil probably depends on your
definition of feminism: If you think feminism is another way of saying ‘hate
men’ then I suppose you have sufficient rationalisation for declaring all
feminists to be evil.

If asked I would say I was a feminist. I am a woman and so I am interested
in even-ing up any uneven playing fields out there as far as my gender goes. I
am not interested in loading the dice against men as that would turn me into
that which I despise. I don’t hate men as a gender – because I don’t actually
see them as one amorphous mass with the same characteristics and attitudes. I
know, I know….what an odd little way to view the world, as shades of grey.
Have I encountered sexist men – yup. Have I encountered non-sexist men – yup.
I would say more of the latter than the former in general. I would also say
than sexism doesn’t conform to the cliches: I have worked in heavy industry
and encountered less sexism than in, say, the City.

Pregnant friends travelling on the tube say they can spot the man who will
stand up and give them a seat (note, man not woman!): it’ll be the one aged
between 20 and 30. I hold doors open for the person coming behind me because
it is a mannerly thing to do, I don’t check the gender of the person I am
doing that for. I get up and give my seat to pregnant women and elderly people
and those with children because my mum would have clipped me round the ear if
I didn’t

That’s about MANNERS, not gender politics.

To be fair to the Guardian commenters (oooooh – didn’t like saying
that), a great number of them have pointed out that he was stupid,
reckless, and deserves his time in chokey. My fave comment:

Maybe you’ll be banged up with that other self-righteous arse clown,
Charlie Gilmour. I believe he was convicted by an all white jury too, so you
must be onto something.

That about sums it up ROTFL

Vetted comments! I knew they would be along shortly – only those who hold
views in agreement with the author permitted

I suppose it’s fair enough for blog owners to require registration, censor,
delete or moderate as they see fit but it doesn’t take the visitor very long
to get the measure of things.

One can enjoy unanimity without any other participants but it isn’t all
that satisfying.

Poor Omar Ibrahim, I might have felt sorry for him, except all my pity was
used up on Charlie Gilmour, another brutally repressed victim of reality.

I beseech all raccoonteurs to give a thought to Charlie on November 11 as
they go about their ablutions. Perhaps I am being too obtuse-piss on him and
Omar too.

I haven’t watched the video yet but I just wanted to say that you don’t get
many of them to the pound.

A fascinating video – I didn’t notice the emasculation taking place, slowly
over many years; which just shows how craftily Harmanites operate.

“Men of the world, throw off the chains of female oppression and rise
up!”

If anybody criticises anything I say, I’ll have ‘em for being oilist.

Vetted comments! I knew they would be along shortly – only those who
hold views in agreement with the author permitted.
Isn’t that standard
practice at the Guardian anyway?

“…in future you would have to call yourself Fred Smith or similar in
order to be allowed to have a viewpoint.”

But clearly, ‘racism’ is :to blame for everything these days:

“She says the mix up over his body is evidence of further racism.

Miss Alder told the Daily Telegraph: “They have just buried any old black
person. From the word go, Christopher’s death has been linked to the colour of
his skin, from his treatment at the police station to the way that he was
handled in the morgue.

“They have obviously just said ‘We have got to bury a black person, that
must be him’. How else could they make that mistake if it wasn’t by looking at
the colour of his skin?””

The mixup involves the body of a woman. I guess she’s missing a
trick. She could get mysogyny in there too, if she really tried!