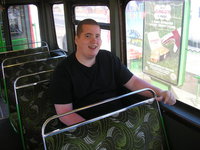 For those of who remember the case of Steven Neary, you will be pleased to learn that his father Mark has written a book about his experiences.

If a recent story by Mark is anything to go by, social work managers should be one of the readers of it. According to Mark, one of Stevens care workers got talking with a fellow passenger who happened to be a social work manager. When they compared jobs and the care worker said where he was going, the manager said âUxbridge. Donât tell you me you work for that fat kid with an arsehole of a father who tried to bring down the councilâ. The care worker replied âThankfully, after hearing from the councilâs three main witnesses, the high court judge thought differentlyâ.

The book is available from Amazon.co.uk

Mark, you should have made complaints to the socail work council â they
have the power –

Social worker should be named shamed and sacked!
Whatever happened to
confidentiality when a so called professional thinks it is acceptable to refer
to a case in a public place â especially when using such derogatory terms to
refer to âclientsâ?
Just goes to show that the whole thing was about âthemâ
rather than Steven and Mark!

Not one single âprofessionalâ involved in the case last year lost their job
and Im still having to work with most of them â the tension in our meetings is
unbearable at times.

Yes, of course he should â but arenât councils just oh-so-coy and touchy
about identifying their employees. If, and itâs a big if, they ever do
identify themselves it will invariably be first name only. Need to know, old
bean., need to know

Hmmm, shouldnât the scumbag be named and shamed?

After all, if this sort of thing can count as âbringing the local authority
into disreputeâ, that should go double for him, no?