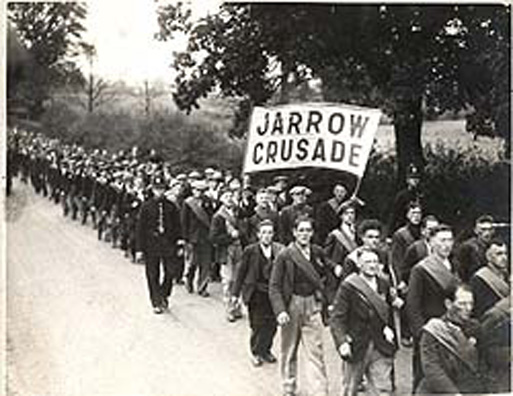 75 years ago, 200 carefully selected men, in strict formation and their Sunday best, accompanied by a barber – lest they give the impression of being unemployable en route – set out to march the 299 miles to Downing Street.

They held their heads high; they looked not for false sympathy, but to bring attention to the fact that the Jarrow ship yards, their town’s largest employer, was in dire straits and unable to provide work to feed their families.

Dole money for an entire family was 32 shillings a week, and then means tested. If a family of four owned five cups – they were expected to sell one, absolutely no money so long as they had their basic needs, no free hospital treatment, no incapacity benefit. No work equalled no food for their families. The unemployment rate was 73%. They could not even fall back on the support of their family and friends – they were all in the same boat. Starving.

In 2003 the last of the marchers Cornelius Whalen, died in a Gateshead hospital. He remembered one of the marchers being given a slice of meat to eat by a sympathiser – and promptly putting it in an envelope and posting it back to his family in Jarrow for their tea.

In 2000 Cornelius was ‘outraged’ at the fuel tax protestors calling for a second ‘Jarrow Crusade’ – he dismissed this as, “a ridiculous insult… For us it was a question of hardship and hunger, but these people [farmers and hauliers] are well off.”

Just as well Cornelius was not around this week.

This week, a rag tag and bobtail ‘army’ set out to recreate the Jarrow march.

They were complaining that in future they would have to repay their student grants; one, long haired, allegedly the possessor of a first class degree from Cambridge, said that he was marching because the ‘government needed to provide him with a job’.

What job flower? Who should employ you looking like an ageing 70s rocker? What do you have to offer? Are there really no jobs left picking carrots in East Anglia, or do you not fancy that?

Another, female this time, apparently with a 2:1 degree said it was ‘difficult’ to get a job.

All of them well fed, well educated; young people, not supporting families; in good health. They are as far removed from the original Jarrow marchers as it is possible to get.

They can’t even march in a straight line – either that or London has moved. They say they walked 330 miles.

Shame on them for daring to call themselves ‘Jarrow Marchers’. Callow marchers maybe.

It’s human nature to obtain whatever advantage one can? Therein lies the
strength of Austrian economics?
These people have been trained by the
Cloward-Piven, entitlement, Frankfurt School, collectivised identity norm, the
hidden con game to turn us all back into brain-deadened serfs?
Yes, the
entitlement mentality is pathetic. It truly is. Especially as a real nightmare
could be coming down the tracks and what will they wail then?
But I think
the cause is in the elites who have successfully taken over the media and
established the mentality to create these awful attitudes.

Reading the “walked 330 miles” article linked by the landlady it should
be obvious that the moochers want to be perpetual students subsidised by
taxpayers 100%. A further irony is the scrolling bar on the right hand side
of the article called “featured jobs” wherein there are enough jobs to
employ the entire moocher crew, one can only assume that they have no
appetite for real work.

The jarrow moochers 2011 have no conception of the hardship experienced by
the original Jarrow Crusade.

Peruse jarrowmarch11.com their official website for a few minutes, it
immediately becomes obvious that there were never more than 20 or so marchers,
mostly the spawn of the various union executives that sponsored this
abomination. The sequential photos reveal that few if any made the entire
march, those that did so mooched off the local authorities along the route or
were subsidised by union members dues. To say that they endured any hardship
is laughable. various photos highlight chubby-cheeked, pot- bellied,
multi-chinned 20-something-year-olds, compare them with the sunken-cheeked
noble original marchers.

It is no surprise to me that a march subsidised by unions that contribute
not a penny to the national productive output and distribute copies of the
socialist would mar the memory of a very a very noble protest.

Sorry for double post, forgot to say, the 330 miles was probably down to
the GPS route planned on their various iDevices haha

I suppose you could say it’s been a success of equality policies – so those
on a 2:2 from a crap university think they are equally qualified as someone
with a good 2:2 whereas the former may speak in “street speak” and have
incomplete written english skills.

These stunts are a travesty. Last century Britain was a brutal and grim
place for many working class people. The NHS, old age pensions, improved
hygiene, improved nutrition and the improvements in free education have seen
the worst of the social evils slain. The labour party and organised unions
played a big part in that. But its history now. We should be grateful for what
was achieved, and paying due deference to the memory of our ancestors we
should move on.

Today we have a “socialist” movement made up of millionaires and bloody
minded wreckers. They pull stunts like the march or setting up camp at Saint
Pauls out of narcisism, and to pretend they belong to a class which no longer
exists in our society. Just as the middle class is growing in developing
nations, so it did in the UK. Anyone who wants to work, can. The 2 million
Poles here are mostly employed. They are as omnipresent in the unemployment
blackspots of Glasgow and Liverpool, as anywhere else in the UK. Their
presence proves that “I cannot get a job” is a myth.

It besmirtches the memory of those brave souls who faught for their rights
in earlier generations that posturing pseuds should try to attach themselves
to the sacrifices of the past. How many of them would be brave enough to
demonstrate like Syrians risking government gunfire after church? They don’t
know they are living.

I got the Donovan reference.

“……… one of the marchers being given a slice of meat to eat by a
sympathiser – and promptly putting it in an envelope and posting it back to
his family in Jarrow for their tea.”

That wouldn’t happen these days – it would have gone off and been inedible
by the time it was delivered.

Truth sir. And the sheep are then encouraged to hate them and call them
chavs.

There’s no shame in being low-paid, or even living on benefits, so long
as that’s not all you ever aspire to. There is shame in being dirty,
ignorant, lazy and criminal, and blaming everyone else for your state

There are plenty of jobs in Britain.

Our young people receive a deliberately poor and unsuitable education
followed by the benefit trap and drugs trap.

These are the people who should be protesting, not Student Grant, but they
are too dispirited and poorly educated to realise that they have been sold
down the river, or care.

So the Polish people have all the jobs, even when they do not speak
English, the fact is employers employ the people who they think are best,
hence without the use of my legs I come well down the pecking order for
work.

Doesn’t your pecker come well down the leg pole or something like
that?

I know of a multi-national owned warehouse in Doncaster, an area with
extrememely high unemployment, where the majority of the employees are
Polish. The signs are in Polish. The workforce is compliant, and local
youngsters are not even on the first rung of the ladder, even considering
that the Polish workforce are better educated and hardworking, it is
hardly surprising that the locals are disheartened. It is not a situation
of their making. Granted the Victorian principle of self-education would
get them further than the woe is me attitude.
I feel the biggest
problem has been the spoon-fed education system. Children are not ‘young
people’, they need to learn self-reliance, that life is not a bed of
roses, life is not about fairness, and to get on in life you have to be
one better than the rest.

Yes it is their fault – My boy (before he got a digital media
recruitment job in London within a week of returning from a four month
trek in the Far East) worked after university (bog standard history
degree at a redbrick) in the local posh bistro for a while. He was the
only UK national that worked there and why? The owners recruited other
young Brits – who lasted about a week if that; they didn’t turn up,
didn’t pull their weight, thought they were better than anyone else,
wouldn’t learn the ropes, were rude to the customers and were generally
workshy selfish nonentities. Ergo 95% of the staff are East European and
third world immigrants, and more power to their elbows.

Ah yes, the “Me, Me” culture – and so unlike the Libertarian “Mine, Mine”
culture too.

“Hardship for them is being without the latest gadget or designer clothes”
Ivan – you are an opiniated bigot. Prove your assertions or remain forever a
pathetic windbag.

Well now young Anonymous, it would be difficult to imagine a better
definition of an opinionated bigot than someone who hides their identity and
calls Ivan a pathetic windbag……

You are obviously very young so all I have to say is try living for over
70 years on only what you earn – no state handouts for anything, no pension
except what you’ve put aside for yourself.

Then you might have earned the right to have an opinion.

These ‘students’, and others like them, are the result of the ‘Me, Me’
culture that has been fostered over the past 20 years. Their only thought –
what can I get for myself, not what can I do. Hardship for them is being
without the latest gadget or designer clothes, though to look at them one
wonders about the latter item.

In many ways they are not unlike those that fire bombed and looted shops in
London.

Sadly, the days of people standing on their own feet are long gone. Gone
also are the days when people would do anything to earn money rather than ask
for a handout from the state – now, apparently, they have classes in school
that teach how to apply for state aid.

When a country gets to the state the UK is in now it is time to take a very
serious look at what has gone wrong and then do something about it but that
will not happen until it is forced on the politicians by some outside force,
be it the people themselves or something else. When that happens, and it will,
it is going to be very nasty for all in the country.

Oy!, I’m a baby boomer and everything that has gone wrong since 1943 is
down to me, I’m not sharing the balme with the me. me culture – they can
fuck off and find their own hair shirts.

Give me back my legs and I’ll stand on my own feet, god where do these
people come from

You don’t need legs to stand on your own feet.

I have a friend that lost his legs in a freak accident. Because he
couldn’t continue with the work he had been doing he set out and got
training in the IT industry. Now he manages the data centre for a very
large company.

It just takes determination and belief in yourself to get on with
life.