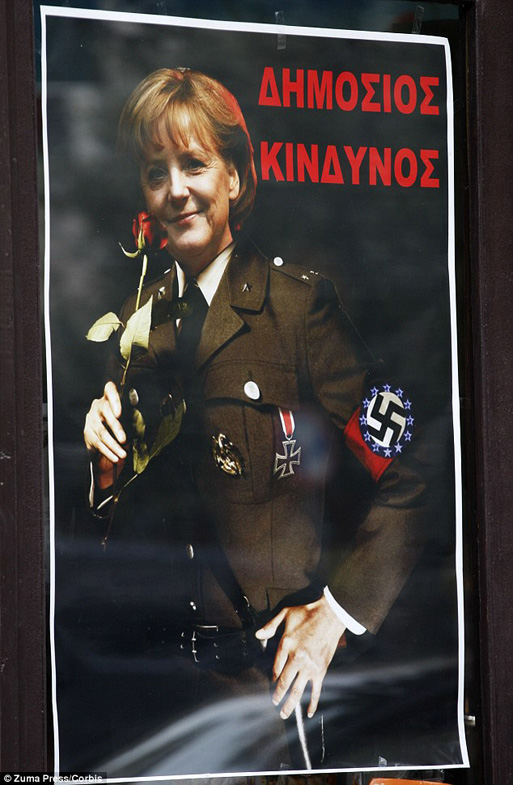 Just when the Bankers and the Politicians thought they had it all sewn up – even Gordon Brown has done a complete about turn from his days of ‘British Jobs for British Workers’ and called (from the safety of Washington!) for a boycott of ‘Protectionism’ aka, every man for himself – the Greeks rediscover their ancient talisman of ‘democracy’ and hold it up before the gathering vultures.

Either way, they will be profoundly skint, but Papandreou has threatened to ask the Greek people whether they would prefer to be free and skint, or skint with a German jackboot up their backside.

Since their reaction to the threat of a property tax accompanied by their electricity being cut off if they didn’t pay up – was to rush out and spend the money under their mattresses on generators and an illicit supply of diesel, it hasn’t taken a Euro politician too long to work out what the likely result of the referendum is likely to be.

Papandreou has replaced his military chiefs with those who support him, and presumably offered them a safe berth on the new warships that France unaccountably offered him in a ‘take now’ and ‘don’t bother to pay anything for five years deal’ – you have to wonder (as ever) which side France is on.

The Euro Commissars have reeled away in horror from this outbreak of democracy – ‘Ask the people’? ‘What do they know’?

The French called the proposal ‘irrational and dangerous’, Merkel, ‘irritating’.

Irritating? Could any single word summon up the complete contempt that both politicians and bankers hold for us, the generators of all their funds.

Irritating! Fleas on a dog are irritating, haemorrhoids are irritating. Now we know – giving the public a say in how their taxes are spent is believed to be ‘irritating’ by those in power.

Yes, the Greeks have taken full advantage of the riches heaped upon them by the Euro commissars – as has every other nation.

Did you ever hear the Welsh complain as millions were spent in preserving their archaic language – did you ever hear the mention of the word ‘Ponzi scheme’ as every road sign in the country was changed to multi-lingual? As flyovers appeared to bypass villages that no one had wanted to drive through in years? Did Welsh taxi drivers ever pause to consider that they hadn’t ‘earned’ these riches?

Why then are we seeing a sudden rash of articles complaining of how ‘unfair’ it all is, that Greek taxi drivers should have known they were living beyond their means? They really should give the money back and live on olives for the rest of their lives!

We have rejoiced as we reaped ‘unearned’ thousands on the housing market, made television programmes explaining how to reap ever more. We have demanded ‘flyovers’ be built to protect crested newts/frogs/bats trying to cross ancient forest land – did we ask where the money was coming from? Did we heck.

I’m just glad the Greek PM has not taken to pompous prognostications. I
don’t think I could stand a revival of “Papandreou Don’t Preach” jokes.

As a result of the Greek actions a double dip recession is now confirmed, a
Greek spokesman said……

“There will be a marked reduction in Melitzanosalata and Tzatziki”

Back in July Forbes ran an article ‘Give Greece What it Deserves:
Communism. You may have seen it. If you didn’t, it can be found at http://www.forbes.com/sites/billfrezza/2011/07/19/give-greece-what-it-deserves-communism/
or just google the title.

Sorry I can’t do the link thing but I do think it’s worth a visit.

The link has appeared! Serious JuJu or what.

The motto of Greece is….Freedom or Death.

Perhaps it should be….. Freedom or Debt.

The Greek words on the picture mean ‘Public Danger’ or ‘Threat.’ Sums it
all up, really.

Bizarre article. I can’t say I’ve benefitted from pouring my taxes into the
EU? I can see the fringes of society who have (the sort of people who don’t
pay much tax)! You make it sound as if the EU magically generates money. The
people who saw little of the ‘EU money’ will be the people most affected by
this so good on them for sticking 2 fingers up to Brussels.

It annoys me when the “people” get blamed.

Governments are elected to serve us. In the old days, when we thought we
could trust our politicians, we all took advantage of certain “extras” that
were offered. The Greeks did the same. The EU gave everyone the impression
that it offered the land of plenty and most of them believed it. The Labour
Party thrived under this premise and is still attempting to push that agenda.

You cannot blame the people for wanting the best for their families.

It is the politicians, corporations and bankers that lied and got fat on
this Ponzi scheme.

Some of the people want to take charge, which is precisely why our
weaselling Cameron will go to any lengths to prevent a referendum on our
membership of this corrupt club.
But if democracy is denied, then don’t
complain, Dave, when we take to the streets – you had the chance and you
blew it.

A holiday in Greece next year beckons – I’ve found some Drachmas at the
back of a drawer.

Talk of the lack of Welsh taxi drivers winging and people renaging on debts
reminds me that a certain Welsh Windbag vowed to sort out the EU accounts, and
then sacked the lady who told him that there was still a problem! Where is his
daughter in law now? At least we have brought (some) of our politicians to
book about their venal ways, perhaps it is time to try doing the same in
Brussels. (But I won’t hold my breath, even if I could at my age).

This one did, loud, clear and often to the irritation of Mrs SAOT.

My own bete noir were the bilingual food signs in supermarkets. What do
you think the Welsh for Pasta is?

As I said in an earlier comment, I hated receiving letters from Cardiff
Council written in Welsh.

Though I do like the Welsh for Microwave oven!

So now I can ignore signs in two languages!

Maybe only the military can sort Greece out.

I suppose he could be accused of Papandreouing to the people….

Interesting – listening to the BBC reports and comments about this latest
twist in the Euro crisis saga, the one word I didn’t hear was ‘democracy’. It
was left to a couple of commentators in the Telegraph and the blogosphere to
point out that at some point, the people will make their feelings known, and
it would be better for all if that be done by the ballot box.

“the one word I didn’t hear was ‘democracy’.”

My ignorance is obviously showing, but I thought the concept of
recognising and honouring a contract was very important to a
libertarian.

As this whole sorry excercise has been about the Greeks weaseling out
of their contracts, I question the whole direction of this article…

If the Greeks want to mismanage their economy, that’s entirely their
business. If they want the German taxpayer to fund their mismanagement,
that’s a different kettle of fish.

The choice for the Greeks seems to be 1) take the EU bailout and cede
substantial economic sovereignty or 2) default and retain sovereignty.
Neither is particularly attractive, but at least they now get to decide
their own destiny, rather than have the Eurocrats sling them into
slavery without being consulted.

Actually I believe it was Brüderle (Federal Minster of Corruption) who used
the term ‘irritating’, not Merkel das Ferkel.