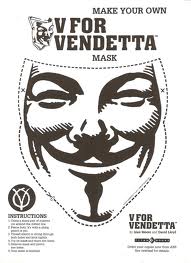 Anonymous, the internet based activist group best known in the UK for its attacks on Amazon, PayPal, Mastercard and Visa in the wake of Wikileak’s publication of the US diplomatic cables, has published its definitive volume of advice for those living in a country undergoing revolution.

Reading it makes for an entertaining afternoon. My suspicion is that it was written by a 14 year old hacker in his Mum’s back bedroom. It is the world as envisaged by one who has never strayed further from his computer than the local Starbucks – with free wi-fi!

We start on Page 2 – A revolution may be imminent if:

The #Hashtag of your country, or name of your political leader is trending worldwide on Twitter.

If it’s not on Twitter you just don’t have a pucker revolution!

By page 4 we are onto emergency food supplies for the next month like:

You may find peanut butter and jelly in short supply, consult your local consulate – that is what they are there for…

Since your country is now undergoing revolution you should not forget your ‘take box’ containing amongst other gems:

In the midst of revolution, the man from the Pru is bound to be still at his desk…..!

A ‘box of tampons’ is a helpful addition to your first aid kit – apparently you can use these to plug bullet hole wounds…..you are, however,  admonished ‘not to try to fight men armed with guns’.

But then if you ‘must travel on foot, travel light’ – so far you have a small field hospital on your back, the contents of the local grocery store, a salvaged fire extinguisher in case you meet any fires, a box of documents, your survival manual, and, I almost forgot to mention, a saucepan on your head, safety goggles on your eyes, steel toe capped shoes to protect you from broken glass, and spare socks in case your feet get wet…I am not making this up.

If you stagger as far as the first corner, I salute you Sir or Madam.

However, you are not out of danger yet.

There are ‘exceptional situations’ to deal with.

One of the best ways of avoiding being raped is ‘not to wear a skirt’ apparently. Someone tell this kid that legions of gays are raped every year that have NEVER worn a skirt…..It gets better, the second best way of avoiding rape is not ‘to appear desirable or attractive’ – not with that saucepan on your head and the steel toe capped shoes you won’t. (Beware passing marauding lumberjacks, they have odd tastes). The final deterrent is to ‘wear a wedding ring, even if not married’ – gun toting revolutionaries must be greater respecters of the sanctity of the marriage bed than your average city centre rapist is all I can say.

If caught up in a stampede ‘avoid falling to the ground’ – yep, sound advice. But then:

If you’re lucky enough to have a car that you can drive away from the riot, drive quickly and try not to stop for anything until you’ve reached some place you know is safe.

Never forgetting, whilst driving quickly and not stopping for anything:

Driving towards Police lines can be interpreted by the Police as a preparation to use the car as a weapon against them. Police are trained and prepared to protect themselves against deadly threats meaning that you may be shot at if they think you are going to run them down with a car.

And who can blame them if the lunatic with the saucepan on his head drives straight at them?

We still have more exceptional situations to deal with, Tear Gas for one…

Diving masks hold off a lot.

Especially when accompanied by the saucepan on the head. He isn’t finished yet…how to protect yourself against rubber bullets and riot cops:

Either a motorcycle helmet or best of all ‘use adult diapers and plastic boxes to protect genitals and chest’.

Yep, Granny’s incontinence pads came in handy after all – aren’t you glad you stashed them in the SAS defying load on your back?

Hang on – just got to page 12 – you need an Old Holborn style V for Vendetta mask over your previous attire ‘to avoid being identified’ which could result in ‘repression imprisonment or even death’ –  he doesn’t mention being ‘sectioned’ in this list, I would have thought it a more likely fate if you’ve followed all the advice so far.

There follows a check list of what you should be carrying – best read in full, but includes; pre-addressed stamped postcards (you never know when you might want to send a ‘wish you were here’ card to your nearest and dearest), a birth supply kit (who knows, you might pass a fellow revolutionary about to drop one) a snake bite kit (ignore this if you are caught up in an Irish uprising, they haven’t got any snakes) and any ‘stocks and bonds’ in a waterproof container (those Greek sovereign bonds might have some value when the revolution is over).

‘Hey, let’s be careful out there’ – if the UK is on the verge of revolution, you need to know how to avoid those who have followed ‘Anonymous’s’ advice.

Hours of innocent fun. You can download your very own copy HERE.

Looting is an exceptional situation during a revolution?
Also where can
I get invovled in one of those non-violent riots?

Oh for the good old days, when if you wanted to get rid of protesters, you
dowsed them in soapy water, then threatened to send in the barbers. Worked
every time.

Wait somewhere safe, til the (surviving) hotheads have overthrown the
government.

Then do politics. It’s safer, with better remuneration and a longer career
path. Opportunities to do lunch, too.

Have 2 flags. Display flag for whichever side is winning.

Maybe it’s just me but I couldn’t help thinking that the list pretty much
doubles as advice on much that one might need to take to Benidorm for a family
self-catering holiday (the saucepan needn’t be worn on the head of course);
and including a contingency for a strike at the airport or channel.

I think it mifght have been the diving mask that clinched it.

The best protection is to utter loudly and repeatedly some potent racist
phrase. You will be promptly arrested by the right sort of police and put in a
safe cell and fed and providede with a lawyer etc.
Repeat ad nauseum.

Does one wear the motorcycle helmet over or under the saucepan? This sort
of detail is important. We should be told.

Rather than wearing a saucepan on your head, I’d suggest a 2 handled wok
instead because you can then get a bit of string and make a chin strap.
Unfortunately it won’t be as handy as a saucepan if you need to biff a
potential raper.

I’ve known this rhyme since I was little:

I knew a man who always wore
A saucepan on his head
I asked him
what he did it for
“I don’t quite know” he said
“It always makes my
ears so sore
I am a foolish man
I should have taken it off
before
And worn a frying pan!”

I don’t know a single rhyme about tampons plugging bullet wounds
though.

There is this one from http://www.nh.gov/nharts/artsandartists/poetshowcase/poetlaureate55.html

In our town’s Post Office
I read the letter from Iraq
next to
Wanted Persons –
from a Sergeant Robert Diaz
whose list of
needs
includes toothpaste, Crest,
he specified, and
toilet paper,
any brand,
wet wipes, Snickers bars,
Mach 3 razor blades – the
best,
Kleenex, Dial soap, bubble gum…
I stop, squint like a child
who
thinks he found the word
that doesn’t fit the rest.
As if to
explain, Diaz
wrote, to plug bullet holes.

Perhaps instead of a wok, a colander might be even better. Not many of us
are blessed with wok-shaped heads, and the holes in the colander would allow
your skin to breathe – an important point in these health-conscious times.
It metal one would be best, of course, but a plastic one might do if you’re
working to a tight budget.

There again, if you have to do some impromptu gold-panning, the wok might
be better.

No, you have to head butt them instead.

Given recent events throughout Britain when it was shown conclusively that
the police were helpless in the face of mass disorder and almost at the
breaking point after two nights I would think it wise to be somewhat
personally prepared for civil disorder.

Given the certainty of power outages due to poor government planning in
your future, alternative heating and cooking plans would seem to be wise.

The present Euro crisis might yet provide the conditions for a run on one
or several banks, which could cutoff your day-to-day money supply, how would
you cope when the ATM’s are down and you have no cash, petrol or food?

So while I think the booklet is probably an over reaction to likely
scenarios it is certainly no less silly than expecting that the “authorities”
will provide for your health and safety under all circumstances, they can
barely provide adequate services under normal circumstances.

There’s that well known saying that we are only nine (or is it ten?)
meals away from anarchy…

“AND WHATEVER HAPPENS:STAY TOGETHER AND WATCH OUT FOR ZOMBIES”

And only for foreigners.

The UK’s Health & Safety Executive carried out a Risk Assessment, and
deemed it too dangerous.

Also don’t forget a clean pair of underpants, stout sensible shoes, a
waterproof tent with portable kitchen, some ready money in case Waitrose can
no longer take credit cards, a range of adjustable spanners in case your nuts
need tightening, a thing for getting stones out of horses’ hooves, and a small
pantechnicon to carry it all.

All this revolting is a serious business, you know.

I’m staying here with my head down. Brits Stay Home. Fight the Good Fight.
You have my support, from a distance. . I shall be cheering you on and waving
The Flag. A Black and White one in this instance.

PS. Could you do something about my Pension.

“A ‘box of tampons’ is a helpful addition to your first aid kit –
apparently you can use these to plug bullet hole wounds…..you are, however,
admonished ‘not to try to fight men armed with guns’.”

with tampons? or anyway?

It’s “pukka” not “pucker” in that context. “Pucker” is for sphincters.

Great article, if the revolution IS televised, we might have to get a TV

The mind boggles at the thought of a peace-loving Native Amazonian,
sniping at a heavily-armed revolutionary, with a Blowpipe &
poison-tipped tampon.

“It’s “pukka” not “pucker” in that context. “Pucker” is for
sphincters.”

Indeed, but it you’re following this advice, that’s pretty much destined
to happen at some point!

It looks as if they’ve stumbled upon an old copy of ‘Protect and Survive’
and brought it up to date with the internet age – it is assuredly every bit as
useful and important as that incredible historic document.

Many thanks for finding it for us and pointing us in the right
direction!

I shall sleep much more comfortably tonight.

You are, of course, completely correct: this advice sounds like some
creative writing homework. One quibble with your piece (no dis-respect
intended). You say: “Someone tell this kid that legions of gays are raped
every year that have NEVER worn a skirt”… I think that should read legions of
men – you don’t have to be gay to be a male who is raped.

Quite right gladiolys, I stand corrected.