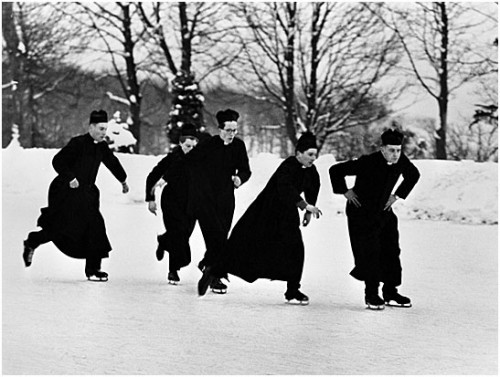 Giles Fraser took the cheap way out of advertising his resignation his morning. No beautifully penned letter with a first class stamp for him – he did it via Twitter.

Better known as Canon Giles Fraser. He who raised his hands and blessed the unwashed multitude as they arrived outside the headquarters of UKs largest property magnates to complain about the lack of sharing going on in our society today.

Were they not all God’s children? Could they not park their tents on the Church’s front lawn and put a stop to the money making activities of the City? Why not? For is not Canon Giles rather supportive of ‘campers’ as a sub-species?

Just a few days ago, the yoghourt knitting Canon was dismissing as ‘complete nonsense’ the idea that St Paul’s Cathedral might be closed for ‘commercial reasons’ – he held fast to the tenet that the cathedral was being closed because: “the camp is making the cathedral and its occupants unsafe”.

Since at the time it was only the money spinning restaurant and shop that was actually closed, although fee paying potential worshippers were in danger of being prevented from standing on the very spot whence once stood Princess Di….this created more than a few rude noises off stage.

They could, of course, have stood outside in homage to the original St Paul’s Cross, the open air pulpit in the grounds of the original St Paul’s – but I accept it would have been difficult to charge admission for this spectacle. Indeed Canon Giles could have given a free sermon or two; perhaps on the profound commitment of the Christian Church to the needs of the poor and dispossessed – after all, more than a few of the campers had been mugged already. A whip round perhaps?

Now it has been revealed that the Church has been losing £20,000 a day thanks to the Crusties on the doorstep and wiser counsel on the management committee have resorted to secular lawyers to clear the remaining obstacles from their worship at the altar of Mammon. £20,000 a day – and in the run up to the head salesman’s birthday!

The protestors have also consulted their lawyers, as you do. Thank heavens for capitalist lawyers eh? Dale Farm will look like a Sunday School Picnic compared to the real deal. Will the clergy fight back with replica crosses?

The anti-capitalist protesters have also launched their own newspaper today – “The Occupied Times” which reveals that amongst other facilities, the camp has organised its own prayer room and held a Sunday Service for 300 – competition! The Reverend Adrian Benjamin, a mere junior salesman compared to Giles Fraser was good enough to preach to the assembled protesters – and received a collected divvy of £108 for the cathedral in return. No wonder the cathedral is upset, preaching doesn’t pay as well as flogging cup cakes.

Can we expect a profit warning from HM Queen Elizabeth, the CEO?

Behind a pay wall, to my utter amazement, (no not really, at least they are consistent) is The Church Times. I wanted to show you what Canon Giles thinks of Bloggers:

In reality, intemperate bloggers are poisoning the wells of open debate, not enhancing it. Many of those outside the blogsphere are put off by the sheer unpleasantness of internet debate. So it is abandoned to people with thick skins and short tempers. And that is hardly the open forum that many bloggers claim they are protecting.

Let’s turn that round:

In reality, hypocritical priests are poisoning the well of Christian belief, not enhancing it. Many of those outside the church are put off by the sheer hypocrisy of church behaviour. So it is abandoned to people with deep pockets and short memories. And that is hardly the open door that many priests claim they are protecting.

There you go Giles – if you had been sincere, you would have been out there in all weathers defending your beliefs, and protecting the downtrodden; instead you resign by Twitter after failing to blame ‘elf an’ safety’ for the projected downturn  in takings!

From the wonderful Daily Mash:

According to the ‘Guardian’ this morning, he’s merely carrying on where his predecessor left off…

Fraser is a fraud.

So, who amongst us has the shortest tempers (OK my hand is up) and the
thickest skins (not guilty, time and tide have seen to that)?

Will no one rid me of this turbulent priest? Seems he jumped/was pushed heh
and jolly good show too.