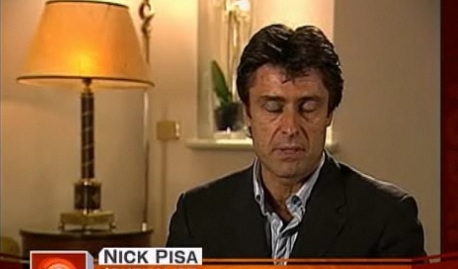 Take good note of the face above – it belongs to Nick Pisa, professional journalist; one of that breed of trained fact gatherers and disseminators of trustworthy information essential to society – without such valued souls, we should be reduced to getting all our information from mere bloggers, and that would never do would it?

Last night, young Nick filed a story as Italian ‘expert’ fact gatherer on behalf of the Daily Mail. He was covering the Meredith Kercher story for the Daily Mail.

In a lengthy article published at 8.50pm Nick gave us a first hand account of the scene as ‘Amanda Knox looked stunned’ as she dramatically lost her prison appeal against her murder conviction. He was on the scene to witness this you see….he detailed how ‘she sank into her chair sobbing uncontrollably while her family and friends hugged each other in tears’.

He even had useful on the spot quotes to pad out this distressing scene, as Prosecutors said ‘it was sad two young people would be spending years in jail’.

He witnessed and recorded Knox and her co-defendant Sollecito ‘taken out of court and escorted by prison guards […] into a waiting van which took her back to her cell at Capanne jail’.

He stood in the crowd outside and heard as ‘Mr’ Bongionrno, Sollecito’s defence lawyer, was abused by shouts of ‘shame on you’.

Presumably these were cries of ‘shame on you’ for appearing in the Italian Supreme Court in drag, for ‘Mr’ Bongiornmo looks remarkably like a woman in all the photographs available of him/her – and ‘her’ Father seems to be under the impression that he has a daughter, rather than a son.

The trouble is, as any blogger worth his/her salt will tell you today, that the entire account was incorrect.

If Pisa witnessed Amanda looking stunned, or sinking into her chair ‘sobbing uncontrollably’, it was because she had been found not guilty – nor could the Prosecutors have made any such statement regarding her spending ‘years in jail’ following the court hearing – he had either made the entire thing up, or was employing an earlier quote from the original trial out of context.

Amanda Knox was freed last night, not taken back to spend years in her cell in Capanne jail!

Indeed, he must be an expert in the goings on at the Perugia court, so much so that he can perhaps sit at home and file stories without bothering to witness the scene – here is a selection of his previous stories.

I am particularly fond of Pisa’s ‘Vatican’s fury as EU court bans crucifixes’ which managed to turn the European Court of Human Rights into an EU institution – against all informed opinion in Europe, something which seems to have eluded our man on the spot.

Does it matter if journalists make up ‘on the spot’ descriptions of scenes which never occurred, and record quotes which they could not possibly have heard at the time and place stated?

It certainly mattered where Johann Hari was concerned, is there any reason for the Daily Mail not to hold a similar inquiry into Nick Pisa’s reportage?

Journalists have great power to influence our beliefs and actions, surely time this power of Pisa’s was leant on?

Is there any truth in the rumour that she agreed to attend the next
Bunga-Bunga party in exchange for her release?

There is a beautiful caption under the picture from the court room:

Media scum: Journalists, photographers and camera crews flooded
the court room during the appeal sessions earlier today ahead of the
verdict

Media Scum – thy name is truth for once.

LOL! Now that IS funny!

Great headline indeed. But I am puzzled. Where was this report filed. Even
I was up to date with the result because the whole fiasco kept interrupting
the usual news and sports channel that I listen to. Presumably it would have
made Sky News positivily orgamsic with joy. So how can anyone file the wrong
result?
As to the case itself, I can express no view, other than that I did
hear an interview on Simon Mayo’s afternoon show (happy memories) with a
journalist who seemed a sensible chap and was pointing out that the Italian
police have a shocking record for putting away the wrong person and brushing
over inconvenient matters like the odd serial killer.

You are such a sweetie, you are far too innocent for this world.

As explained in the links, they pre-write two stories, one for each
result, and hari-up some quotes which haven’t actually been said but are
more or less certain to be spouted by someone. Or could have been. Or
something.

Then, when the judge found her Guilty (of slander) on the first count,
they quickly released the pre-set Guilty version, failing to appreciate that
the real story was “Cleared!” because they didn’t listen any further.

It doesn’t really matter where anybody is sitting; all that matters is
whose finger is poised over the publish button. Nick Slime appears to have
had a strong preference for a guilty verdict which may have contributed to
him hearing what he wanted to.

Whether he was the one who authorized the publication, I do not know. I
bet somebody is being flogged in the dungeons at the Mail, though.

I quite accept that it would have been a sub who released the story,
indeed Pisa blamed the earlier ECHR headline on a sub – but does that not
gloss over the fact that they were prepared to release a story claiming to
be an eye witness account of events and quotes that were incontrovertibly
inocrrect, since they had not occurred?

claiming to be an eye witness account of events and quotes that
were incontrovertibly inocrrect, since they had not occurred?

Not glossing over it; accepting it, absolutely. I could not agree
more.

However, the context is that they run the risk of being caught-out in
the electronic age which was much less likely in the age of hot metal.
Are you by any chance thinking of a romantic journalist who waits until
the events are done, then goes back and scribbles out her copy, sending
it off to an editor with a green eye-shade? Even in that world, the
first thing to learn was to set up a template for a story, then swap
round the paragraphs as necessary, chop, chop, before either telephoning
or wiring it in – which implies only one version, and not one the editor
can necessarily check.

For all editors scream about accuracy and legality, there is one
thing they fear above all else: white space. Why do papers print
fiction? Well, because the alternative is printing nothing. The absolute
truth is expensive and often misses the deadline.

Journalism isn’t history. If you want that, you’ll have to wait – and
even then have a big argument. Journalism provides the first draft and
walks on the border of fiction since it is largely the same people doing
the job. About the best you can hope for from them is that they’ll get
the bones right and give an impression of what it was like. If you are
very lucky, they’ll know fact from fiction – but the job erodes that
sense while hightening others.

The journalist is anticipating events, the way a sports commentator
does. They don’t only look back; they have to straddle the line of now
which divides the past from the future, anticipating how things are
going to turn out so they can be in the right place to catch the story.
Quite often they make things up, but plausible things. If they’ve
guessed right, those things will have happened by the time it comes to
file and so it won’t be untrue, it will have happened.

Hari got his come-uppance not so much because he was caught out
nicking stuff and making the rest of it up, but because Jack of Kent and
others were able to show who was behind the construct which butchered a
load of other scribblers on Wiki.
http://velvetgloveironfist.blogspot.com/2011/09/poison-pen-of-johann-hari.html

BTW, if you want a narrow but reliable source very high quality
first-hand reporting, I can recommend Mitchell Images .
http://mitchell-images-blog.blogspot.com/

Also, I expect the quotes were ‘placeholders’, to be swapped for
real quotes and so speed up the process.

I suspect that the journalist wrote two versions. Due to time pressures
they would not have wanted to wait till the actual result before starting to
write the article.

So they wrote one with acquittal as the result and one with being found
guilty. Some sub-editor (it’s always the sub-editor’s fault) then made a
boo-boo and used the wrong version in the heat of the moment. Why it was not
immediately removed is something that the Daily Mail needs to look into. It
was up long enough for it to be screengrabbed and turned into an
embarrassment.

But not really anymore of a ‘conspiracy! making up news!’ story than a
shopkeeper putting one of those lottery rollover posters up before the
draw. The ones they get sent in advance.

Unless you’re paranoid loon Tim Ireland, that is, when of course,
something like this is clear proof of teh eeeeeevilness of teh Murdoch
Empire!

Hi Gildas – would suggest ‘the Monster of Florence’ is a good book to
start with on that theme. They contrive to make the Met look competent!!

He/she seems to be a journalist (sic) that should be employed by the BBC:
up to their highest standards of honest and unbiased reporting.

That’s got to be “Headline of the Year”.

It’s certainly ‘Blog Title of the Month’ unless anyone comes up with a
better example!