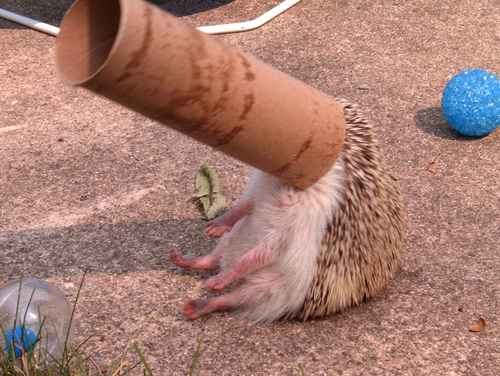 Victor Ford has many problems in life. He’s an alcoholic paranoid schizophrenic.

Ambling along Balmoral Avenue in Spalding, he was seized by a desire to make a profound post modern deconstructive comment on the prevailing architecture – or something like that.

He dropped his trousers.

Around the corner came PC Plod in his little Plodmobile. There were no rioters in Spalding that afternoon, no battered housewives, no bank robbers, not even an errant gardener lighting his barbecue. He devoted his full attention to the mentally ill Victor Ford and his dropped trousers.

Over his shoulder, PC Plod could see a housewife standing near her window – she might have been able to see Victor squatting on the grass verge, we don’t know, she wasn’t called to give evidence. It was PC Plod’s considered view that she ‘could have’.

Glancing right, PC Plod could see a woman approaching with a child in a pram. She also – and the child, don’t let us forget the child – might have been able to see Victor with his trousers round his knees. We don’t know, she wasn’t called to give evidence either. Again, it was PC Plod’s considered view that she ‘could have’ seen Victor.

PC Plod moved in to interrogate Victor. ‘What are you doing’?

PC Plod, not being a slapdash policeman, moved closer, the better to ascertain whether this statement was true or not.

There, beneath Victor’s bottom was indeed a pile of faeces. Game, set and match you might think.

PC Plod, having nothing better to do, closely inspected the faeces. He poked it, he prodded it. He turned it over.

Underneath it, he discovered a hedgehog. Not just any old hedgehog, a dead hedgehog. A potential dinner-for-one now thoroughly ruined by Victor’s well aimed whatever.

Which is how Victor came to be charged with ‘outraging public decency’ by crapping on a dead hedgehog.

Let us not forget – Victor was also banned from going to Scotland for three days – not, you understand that Victor had ever been to Scotland nor expressed a wish to do so. Must be something to do with protecting the dead hedgehogs of Scotland…..

Just wait until the Chief Constable of Lincolnshire argues for additional funds in order to police Lincolnshire effectively…..

Dead Hedgehogs have ‘Uman Rites too you know. I trust the Community Victim Support Officer has filled in all the required diversity forms on behalf of our prickly friend.

Over to you Woman on a Raft – follow that!

“Which is how Victor came to be charged with ‘outraging public decency’
by crapping on a dead hedgehog.”

That just has to earn him some sort of bragging rights with the
criminal fraternity! If onlt he refuses the fine and goes to jail….

*scene: a crowed cell in Supermax*

That is funny, witty and enlightening
And a bit sick
All things we
want from Raccoon?
G the M

As the world’s only blogging hedgehog I feel compelled to comment on the
matter.

We in the erinacid community* are pretty sure that, once life is extinct,
being covered in shit is the least of our problems (judgement by the Great
Light-Crafted Porcupine of Good and Evil, a notorious bastard, is much higher
up the list).

If Victor had been some young thug with a sense of humour then I’d say tie
him down naked with his floppy bits exposed and I’ll send a few of the boys
round for a bit of target practice with their foreheads, , but as it seems he
‘s just some poor sod with a bit of reality trouble, I say leave him alone.

*I am a community leader, you know.

Do the plod now carry little sticks* with them to poke, prod & turn
over faeces? And what happened to the offending ordure – surely it wasn’t left
there for “the cheeeldren” to step in?
* now known as “a Gillian”, after
Dr…PhD.

The £15 surcharge is added to every fine, whether there’s a victim or
not.

And £85 costs meant he pleaded guilty, so no one would have called to give
evidence, so the issue of whether the two ladies gave evidence is a bit of a
red herring.

Of course, whether this prosecution as a whole was in the public interest
is another matter entirely…

I suppose that ironically, that’s about the same as the rate of VAT.

No herrings were hurt, because Victor pleaded to a section 5.

What’s going on when someone like this is pleading? Do you think it’s
the press?

Obviously the location of the dastardly deed will have a profound effect
upon local police paperwork.

All the formal advice [“Lincolnshire Police Health & Safety Guidance
Note 11 – Packed Lunches”] previously offered to constables of that county,
will have to be updated to minimise any risk, if Hedgehog Flavoured Crisps are
added to their lunchbox.

May I seek clarification?

Was the gentleman convicted of crapping in public and thus potentially
offending public decency, or of assaulting a dead hedgehog? Or both?

Clearly the assault would be the more serious crime.

I suppose it is also possible that the gentleman could not lay his hands on
a supply of suitable tissue at the critical moment, and thus had to
improvise.

“and thus had to improvise”

With his haemorrhoids? Have some mercy on the poor chap!

That last sounds painful if he used the wrong side.

“Was the gentleman convicted of crapping in public and thus potentially
offending public decency, or of assaulting a dead hedgehog? Or both?”

Given the amount of time devoted in the case to the dead hedgehog – you
would appear to be correct that the assault was viewed more seriously.

What if it was a dead pheasant or some other upper class game bird –
would that have been viewed less seriously than Mrs Tiggywinkle?

Don’t all Pheasants technically ‘belong’ to somebody, in which case it
would be criminal damage I would expect.

Apols for the names above – between writing this & sending it I trolled
over to the Telegraph where I read something of such passing silliness that it
seemed as though the paper’s deputy editor must be but steps from wandering
about with his willy out. So I changed “Albert” to “Benedict”. Sadly, I forgot
to change the 2nd instance.

Spalding Dibble, the CPS & the mags have not covered themselves with
glory here. Was the £15 to provide a decent funeral for Mrs Tiggywinkle?

Compare & contrast –
We had an old chap lived near us. Not at all
well in between the ears, not able to cope in the Comoonidee, & not given
the support he needed.

I happened across him one day as he ambled along, having as he sometimes
did, forgotten to put PC Flippyfloppy back in the station. Muttering to
himself, & wearing 3 overcoats in high summer, he was plainly not quite
the ticket. Nonetheless, an eagle-eyed young woman had discerned his wardrobe
malfunction & was busy calling the cops to attend to her outrage.

I’d seen a patrol car she hadn’t noticed & legged it over “Benedict
(for we shall so fictitiously name him) is wandering about with his willy out
again. Some daft bint’s on the phone to your ops room – any chance you can get
him back to the hostel before someone from out of area turns up to nick
him?”

Bless ‘em, they scooped him up, got him to adjust his pants, & made
Little Miss Self-Absorbed aware of the extent & nature of Albert’s mental
problems. No further action.

And how do we know it was dead before he started?

Does it count as clay for a baked hedgehog?

As a long standing member of the Hedgehog Liberation Front I am bound to
say that this raised prickly issues.