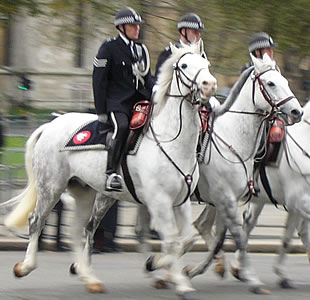 This is a crosspost from Malpoetâs Weblog.

In the wake of the riots we were bombarded with competing claims about who controlled them. The police are sure that the successful tactics were evolved by them while the politicians say that it all got sorted when they returned from holiday.

I think that the riots stopped because the weather turned bad, but there is a serious issue about who should do what in keeping us safe from crime.

The government have said that they will scrap the costly and useless police authorities and replace them with elected commissioners. Well OK, but what exactly is a commissioner? The chief of the Met Police is called the Commissioner whereas the people who run all other UK police forces are called Chief Constables. If the Metropolitan Police Authority is to be replaced by an elected commissioner they are going to have to sort out the titles.

The real issue, of course, is what part of policing should be decided by politicians and what is decided by the police chief.

The standard answer is that policy is for politicians and operational matters are the responsibility of the uniformed cops. But where exactly is the line drawn between these? Many libertarians support the idea of directly elected police control in some form because they want policing priorities to be responsive to citizen concerns and they also wish to get policing to be closer to specific community conditions. These are legitimate aspirations, but I would suggest that focusing on election of a figurehead does not address the right issue.

Britain is unlike most other countries in its insistence on largely having a single police service in which personnel deal with everything from dropping litter to multiple murder, parking infringement to complex fraud. This is all done through 43 different police forces, roughly relating to counties, that are far too big to provide genuine local accountability and much too small to address large scale, organised crime.

The apprehension of criminals and even the prevention of crime is a technical process which most people would agree requires skills, experience, training and a high degree of efficiency. Quite obviously these are things which require stability and are not compatible with the turnover resulting from elections or the absence of appropriate background that election candidates are likely to have. Whatever title you give them, the operational head of any level of policing cannot and must not be determined by popular election.

At present, Police Authorities do not perform any worthwhile role. They are meant to be the means by which Chief Constables, or the Met Commissioner, are accountable for the performance of themselves and their force. The reality is that the Authority is composed primarily of Councillors selected by the local authority who have no knowledge of policing and no idea how to hold the professionals to account. Serving on the Police Authority is just another little source of responsibility allowance and a diverting couple of hours from time to time.

An elected person with specific responsibility for setting policy frameworks for police and holding the Chief constables to account would have more focus and authority and might gain sufficient insight to be able to probe the effectiveness of the force if s/he held office for long enough. The problem is that this doesnât deal with the problem of getting policing organised on an appropriate scale to deal with the whole range of crime and public safety that is required. Also, in those places which have an executive mayor, particularly London, the elected Police Commissioner is going to be a competing figure to the mayor and a dilution of the executive mayor role.

A few years ago it was unquestioned that only the state could run prisons and handle prisoners. Now we have many privately owned and run gaols and prisoner transport is largely contracted out. Tiny steps have been taken to improve policing by de-criminalising some traffic management roles and introducing Police Community Support staff to deal with anti-social behaviour and petty crime.

Even these micro moves have been met with implacable hostility from the Police Federation which, although they are prohibited from organising industrial action, is one of the most intransigent and powerful trade unions in the country. Apart from the rank and file union, the Association of Chief Police Officers (ACPO) is a formidable barrier to reform. ACPO is the senior officers trade union, but at the same time it gets large amount of taxpayers money so it is one of those strange hybrid organisations by which the state extends its tendrils where they shouldnât be.

Financial pressures brought about change in the prison system and that will go further. The present economic constraints should be an aid to breaking the massive institutional barriers to police reform.

The way forward is to go ahead with abolition of Police Authorities. In those areas with an executive mayor policing should become part of his/her responsibility. In the rest of the country an elected police commissioner would be OK.

The real job though is to get the right sort of policing. Major crime and the contingency arrangements for large scale incidents must be coordinated nationally and internationally.

All motoring offences, which does not include such things as manslaughter by use of a vehicle, should be de-criminalised. The task of enforcing the civil motoring laws needs to be contracted out to private providers. Local crime and crime prevention needs to be separated into its specialisms of theft and burglary, rape and sexual offences, fraud, etc. and delivered in the manner chosen by the communities they serve.

It is my view that the vast majority of policing and public safety would be best handled by private contractors, but there is no reason why mayors or commissioners should not keep it as a directly employed service or a mixture of public and private provision.

How right is pychonaut. The detection and prosecution of criminals at any
level should never be in the hands of private individuals or companyâs. It
should be solely a matter for the Police. Private companyâs are profit
oriented and the amount of money they can make will always be the driving
factor. Whoever says crime doesnât pay obviously doesnât have shares in G4S.
Interestingly, I recently read a news report stating that two employees of G4S
tagged a criminals artificial leg! This person then removed the leg and was
able to bypass the curfew conditions. I rest my case!

As it happens, a fair amount of criminal investigation and prosecution is
already done by non-police bodies. Only a few, to my knowledge, could be
considered private bodies (eg: animal welfare prosecutions are done by the
RSPCA and tagged curfew breaches are done by whichever company has the
curfew-monitoring contract in a particular area â usually itâs Serco or G4S).
The rest are public bodies: Benefit fraud is covered by local authority
investigators and the DWP. The HSE cover some, Trading Standards do some, an
insane Tory person created offences that LEAs prosecute and an equally-insane
Labour person created some that OFSTED prosecute.

The results areâ¦mixed. Training and conduct range from fairly good to
woeful. Based on my (entirely personal and not scientifically measured)
experience, they all tend to be worse than the police, on average, in terms of
quality of investigations, conduct of interviews and preparation of cases.
Some do not realise that PACE is just as applicable to them as it is to the
police, and most have a very poor knowledge of it. OFSTED simply have no idea
what they are doing at all and LEA investigations are essentially a situation
where imprisonable offences are prosecuted by social workers, which is exactly
as terrifying/comical as it sounds.

The one consolation to be drawn is that none of these bodies have a powers
of arrest, entry, search and seizure beyond those held by a normal citizen.
Those are reserved to the police. And good thing too.

I hold no brief for the rozzers. Quite the reverse, in fact. However, I
find the alternative of powers of arrest, detention, use of force, taking of
samples, searching of private property, seizure of private property as
evidence, use of weapons such as batons, tasers and captor spray and so on,
being handed over to whichever shower of lowest-bid crooks bought the mayor
the best lunch, a more troubling prospect still.

Also, you know theyâll rebrand everything. I want criminals arrested and
taken to the police station, not compulsorily invited to enjoy a custody
experience at the Coca Cola Detentionarium.

There is a very strong argument that says there cannot be a crime without a
victim and to a great extent I subscribe to it.

Policing however would be much simpler however if we scrapped a great deal
of statutes and allowed common law to deal with those issues. So much
legislation is just taxation by another name.

I for one want my liberty back and I am not prepared to give any more it
away. To give private contractors any more rope quite frankly horrifies
me.

âThe task of enforcing the civil motoring laws needs to be contracted out
to private providers.â

OMG. OMG with bells on.

You really want to let loose the likes of private clamping contractors (for
that is who they would be, either in character or in actual fact the same
people) on moving traffic offences? Are you insane?

Can you imagine the level of pettiness, zeal, i-dotting, t-crossing
grasping obsessive fanaticism that these lowly money-grubbers would bring to
this task?

If there is one thing that would be even worse (much, much worse) than the
current situation, this would be it.

Couldnât have put it better.

ââ¦.private providersâ in that context, is a euphamism, which together
with Quantitative Easing are both licences to print money.

Iâve long had the feeling that routine policing is organised at too large a
scale â up here across the whole of West Yorkshire. And that this makes the
Chief Constable â the delightful Sir Norman â effectively unaccountable in any
real sense.

In times past Bradford had a Watch Committee â part of the City Council â
and a city police force. It seems to me that this is the right scale for a
force and makes organisational sense. Indeed coterminosity is an excellent
principle.

The problem lies in specialised roles, the pressure put on smaller forces
by labour intensive activities (e.g. major murder enquiries) and the
inefficiency that comes from duplicated back office support.

I would still back breaking up West Yorkshire Police into separate city and
district forces though.