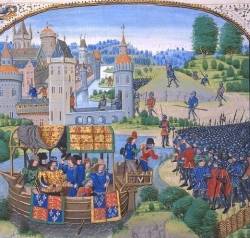 I started writing this piece last week, having watched general low level vandalism and petty crime spreading across London on Sky, and then retiring to listen to the radio, sip a nice Shiraz and join in banter on Twitter, cheerfully urging no one in particular to “Send In The Troops” in true Daily Mail style. Highly entertaining.

Parts of the London borough where I was born have been burned out. Rioting spread to Birmingham, Liverpool, Bristol, and other cities.

I am pretty sanguine. Curiously (and I have blogged on this a little before) from the long view of history England Britain has actually been hotbed of violent revolutionary direct action, going right back to the Peasants Revolt in 1381 which came damn close – and I mean really, really close – to overthrowing the Monarchy and power of the noble classes and establishing a kingdom on what might well be called socialist terms.

But looting mobile phone shops and sports retailers is not exactly what Wat Tyler had in mind, I am thinking.

I feel a bit sorry for the rioters. Well, up to a point. Let me explain.

I say nothing about whether the Metropolitan Police have shot and killed an innocent man in the person of Mark Duggan. It may be they have, and it may be they haven’t. Goodness knows the Met has form, and I am not just thinking of Charles De Menezes.

Those with a longer memory will remember many years ago, back in the early 80’s, when the police opened up on Stephen Waldorf and riddled his car and him with bullets. Only problem was they got the wrong guy. Thankfully, he survived.

There is an old Royal Marine saying: the only thing more frightening than an officer with a map is a sailor with a gun. To which one might add: or a Police Officer.

Be that as it may, that is not an excuse for or a reason for the rioting and looting. But it seems to me that we have a situation in which large sections of the community have been sold a pup, a dream, a lie.

The Sunday Times ran a story that that children of ambitious immigrants and “ethnic minorities” are forging ahead in taking up places in grammar schools in disproportionately high numbers. In the West Midlands, for example, Indians make up 9% of the population, but children from an Indian background make up 19% of grammar school children.

Grammar schools have since Shakespeare’s time and before been the principal and best ladder engine of social mobility, enabling and encouraging the talented children of the poor to rise in society. Perhaps that is why the Political Establishment (not just the Left) has for so long tried to destroy them. Sally Liu, who came to this country in the 1970’s and worked in a Chinese restaurant, sends her son Michael to a grammar school. She says:

“We went without a lot. We stopped going out to save money for books and things like that. He travels for more than an hour to get to school, but it is worth it.”

It is the State which has told these people that it’s all everyone else’s fault. It has told them a lie. The lie that life is fair, when it is not, that it should be easy, when it never is, that if you are disadvantaged then you do not need to be harder working than anyone else when you do, because that’s just how life is.

And they have been told the most pernicious lie of all, that there are no limits, no boundaries, no right and wrong, and no consequences for your action. No come backs.

And at the same time these people are sold and buy into an aspirational dream of the cheapest type. The trainers, the bling, the rap, the iPods, the plasma TVs, the dope, the iPhones – all targets of the rioters, of course. I note that in Clapham every shop in the high street was been ransacked except one: Waterstones. Think that says it all, really!

No wonder these poor ignorant, patronised fools steal and loot, because that what they have been programmed to do. They have no moral compass, and no sense of respect for others.

And the State? Having allowed these lies to be told, indeed having told these lies, it is now the responsibility of the State to deal with this matter, and firmly. The State is the organised servant of the will of the Common People, and.that particularly includes the shopkeepers and businesses owners whose livelihoods have been destroyed. That means that there must be very firm action. In short, heads are going to get cracked. That is what happens when people riot and policemen are told to stop it quick.

But I have to feel sorry for the Police too. In the new, shiny, politically correct world that fosters indolent smack head rioters, we no longer have Police Force. We have a touchy feely “Police Service”. Maybe, once Health and Safety has conducted a Risk Assessment they will be allowed off the lead, if they are up to it. And if they are, then there will be the inevitable outcry, of course, of about “brutality.”

An interesting aspect of following Twitter was how reports came in of local communities – often “ethnic minorities” who’s shops and restaurants are in the front line – banding together and taking fairly tough direct action to preserve their own property and dealing out rough justice, often while the Police turned a blind eye. Good to see there is still some common sense left.

One final musing. Listening to Red Ken, doing his best to make political capital out of thuggery, he said that there is a generation in despair.

No jobs, no chance to get on the housing ladder and so forth.

I agree, but it is not confined to the “yoof” on the inner city. It is spread more widely.

It is the farm worker who cannot afford to rent a house in his local village, the graduates who have worked hard to get a decent degree with no chance of a job, the middle manager with a family thrown on the scrap heap in his middle forties, the ordinary self employed guy or gal struggling with a mortgage and with no chance of a fat public sector pay off or pension who face a bleak old age.

These are the people who should be rioting. Quite what they (or we?) would smash up I don’t know. But if anyone has some suggestions, I’d be all for it.

As a solvent working person, who has the great good fortune to inherit from
solvent working parents, I have little or no need to take personal State aid.
I take the general aid; police, fire, health, highways and defence etc. I am
happy to pay taxes and support my community in other ways.

But I have no need of social services, legal aid, the benefits systems at
present. When I’ve tried to help out my neighbour in her unending battles with
the State (not a matter for present discussion) it’s very obvious that she is
their meal ticket, rather than the other way round. No meeting is at her
convenience, no decision takes her views into account and no communication is
timely. She is merely a placeholder for funding.

Last year I took 6 weeks off after a minor operation. I claimed ESA, as I
didn’t fancy wrestling with the DWP to keep my NI contributions up to date.
The weekly amount I received was approximately 50% of my daily pay. I spent it
on drink, as you do. Much more interesting was the constant pressure from Reed
Services at the BA to get back to work. Fine, they have to do it. What they
shouldn’t do is to threaten me with future benefit cuts, if I failed to turn
up in person AFTER I’d returned to work to complete their tickboxes. Why
should I give up work to complete the paperwork, especially when I could
simply email it or fax it?

Without attendance in person, they wouldn’t get paid. Luckily, my signature
(or rather my non-banking signature) is easy to forge so the overworked but
pleasant young woman at Reed did something on her own initiative.

They need the underclass; it justifies their existence.

I had discussion with an inner-city left-wing teacher in the 1980′s,which I
have never forgotten, he excused the poor performance of his black pupils as
being the historical result of slavery. Basically he said black people had
learnt not to work hard and this had been passed on to their children. I was
disgusted that he had such poor aspiration for his pupils and was accepting
second best from them.
However, now I am much older and seeing how things
have panned out with a vast percentage of the population in bondage to the
State, I wonder if there is some correlation: slavery=poor performance?

You’ve nailed all the major points and most of the minor ones there
Gildas.

Apaert from the loss of that social mobility funnel provided by grammar
schools another thing the hijacking of social institutions by politically
correct thinking has done is equip people with an overdeveloped sense of
entitlement.

This leads to resentment when life does not unroll like a red carpet ahead
of somebody and give them an easy path to everything they desire.

We can all, Ithink, agree that the English are not too good (e.g. lazy) at
languages…especially our own.
In this specific, the confusion between
‘free’ as in freedom & ‘free’ in the sense of ‘there’s no such thing as a
free (without cost) lunch’.
In my book the inability to tell the difference
started with Beveridge & Atlee; resulting in what we have today.
We are
no longer free in its true sense; we are serfs to our elite here & in
Brussels….and we have still to learn that there is no free (without cost)
lunch. Only that some of us have been brainwashed into believing that we are
entitled to one. Until we get our semantics sorted out we will remain
self-shafted.

Andy Duncan at Mises gets it rather well.
Essentially what you are
saying, I think?

I’m not really into smashing things up, but if pushed, maybe I’d have a bit
of a go at University Social Science Departments, and perhaps Women’s Studies
Departments (but only if they wouldn’t let us have a Men’s Studies department
to balance things up – or better still, a People’s Studies department). Oh,
and the Muzak speakers in shops and other public spaces. And while we’re about
it, wind turbines.

Nope, don’t think so. There might be a few testing their luck at the
Notting Hill Carnival but if the police are smart, they’ll flood it to
ensure it doesn’t escalate.

No true , not next week, or possibly next winter.
The Elephant in
the room.
The coming, great depression II.

Maybe the old adage – You get what you pay for – is applicable?

They got the round guy?? Do you mean the wrong guy?

I seem to recall Waldorf was quite skinny too…

(Just to prove someone’s paying attention to the comments) ;-0

what would I smash up?

Um – if I could afford the train-fare – would love to throw a brick through
a window in Strasbourg..

hang on – someone at the door…

Home Secretary steals £100k+ from our nation – says sorry and doesn’t even
pay it back.

How can we take the law seriously if it isn’t consistent?

It is very consistent – you just need the apply the formula, which
operates to ensure that the higher your position in society, the harder
you have to try before you actually get done for something. It appears to
be exponential, too.

An example, I think, of the “broken windows” theory (*1) which is a key
part of US police chief Bill Bratton policing strategy (*2). A reason why I
dont think he will last too long in the UK.