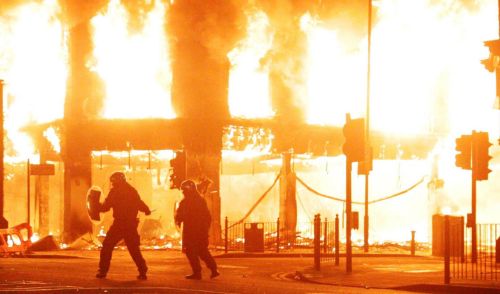 Violence, looting, buses and cars on fire, petrol bombs being launched at patrol cars â while what has happened between Friday and Sunday in North London is relatively small fry when compared to the riots of the 1980s, it has still left a permanent black mark on the lives of many whose homes or places of business have been destroyed.

Of course my heart goes out to them, and if I hear one more Statist commentator explaining how this is all a product of âdeprivation and isolationâ then I swear Iâll do an Elvis and shoot the television screen. Are these people seriously suggesting that it was need that drove thieves to break into Halfords and pinch themselves a mountain bike? Or smash their way into a sports shop and pick up some free trainers? This really was the revenge of chav Britain, against the mistreatment dished out to them by who or what, I really donât know. The one thing of which this bunny can be almost certain of is that Mark Duggan was stratospheres away from their rather empty minds when they took to the streets and shops, while some appeared intent on torching anything with wheels.

Insomnia left me listening to the BBC Five Live phone-in during the early hours of the morning. One of the better callers was a well-informed gent who originally hailed from Moss Side and therefore had some personal experience with this sort of thing. His solution centred around the police and âinfluential members of the communityâ sitting down and establishing some sort of harmony again. On the surface this is entirely sensible since policing by consent is the only form of law enforcement that most of us will put up with for very long. The question that nobody posed and so was left unanswered is:- how do you police by consent where the âinfluential members of the communityâ are largely made up of criminals? One suspects that the only honest answer to this question is â you canât, and some swift and effective action is needed at least until the area is back in the hands of its well-meaning citizens.

One of the other great âexplanationsâ for the idiocy of Friday through Sunday is that âthis is what happens when people feel detached from their communitiesâ, as if the closure of a youth club or dreaded âgovernment cutsâ have caused naturally law-abiding people to snap. The reality was exposed by another caller to this radio show who claimed that heâd seen murders go ignored and unreported in the part of London where he lived. Some may not believe it, probably because it means confronting a wider problem, namely that many of these communities are policed not by law enforcement working in consent with the law-abiding, but by the criminals themselves.

Faced with the choice, which arrangement are those of less than benign intent more likely to go for? Naturally, one of the rules of gang culture is that âgrassingâ and the involvement of the police in turf disputes is not permitted. In my favourite book on the subject, âGang Warâ by Peter Walsh, one of the later chapters details the efforts of Mancunian villain Ken Keating to keep the policing of local crime in-house by patrolling the area in a van marked âGRASSWATCHâ. Quite hilariously, the scumbag then has to endure the âheartbreakâ of discovering that his son, Sean, has turned rat and become a police informant. This was later captured in a Channel 4 documentary, with excerpts used by Bob Mills in a particularly brilliant edition of his âIn Bed With MeDinnerâ programme â first person to say âShamelessâ wins a coconut.

The serious point of course is that rather than being âdetachedâ from their communities or victims of âdeprivationâ, many of those who operate in such gangs make a conscious choice to rule them by fear from a distance. The Met in particular may be something of a toxic brand these days following the blunders of the last few years and I donât go in for Anna Raccoonâs blanket statement that law enforcement âdeserves our supportâ. No individual or group is worthy of blind faith or obedience regardless of their actions or performance, and so the challenge is for the police, in partnership with law-abiding local people, to reclaim the streets of our cities from gangs.

This does not mean âzero toleranceâ policing, but a clear and proportionate application of the law, with no concessions made to âcultural differencesâ or any attempt to âunderstandâ the local criminal element. Only then can we eradicate the theft, violence, disorder and panic that they cause. Take care and Iâll catch you tomorrow.

More power to Tariq Jahan, what a wonderfully dignified person.

Medway for example, birthplace of the chav, had only some minor trouble on
Monday night.
There are plenty of benefit families, and a largeish criminal
element and, enough to cause some serious damage but yet they didnât.
I
donât believe for a second it had anything Ty do with Kent policeâs stern
approach either.

I despair, I really do. It isnât just one generation. Itâs looking like
three generation to me.
Things were looking bad when I left England twenty
years ago, but now it is so much worse than even I imagined.
Itâs far too
late to try and educated this current bunch. They just have to be taken off
the streets and locked up, although I do understand that some are worse than
others. But itâs no good looking to their parents. They have already failed,
and gotten away with it.

Donât you believe everything you read in the papers, Elena. There are
places with problems, and we saw quite starkly where they are during the
last few nights. However, about 99% of Britain DIDNâT riot or go out
looting, and in some of the affected areas, locals came out to protect their
own communities and to lend assistance in the clean-up. Draw your own
conclusions from that.

Britain may have some problems, but it damn well isnât sunk.

Oh, I do so agree. But why do The Goodies always have to clean up after
The Baddies?

And I wouldnât hold your breath if I was you. Elf and Safety will
likely put a stop to that.

These riots were rooted in the fact that we have brought up a generation of
children without values. We have spent billions trying to educate them but
what have we taught them?

What we have ultimately taught them is that they have rights.

To food and shelter.
To be educated and entertained.
To work and earn
a minimum wage if they do.
To medical care and counselling.
To a defined
level of prosperity relative to others.
To do as they wish and not to be
discriminated against.

Unfortunately, we have not taught them that there are any responsibilities
to go with these rights and we have thus spoilt a generation of kids.

So it is about time some politicians realise what they have done and begin
to accept that these riots were rooted in affluence, not deprivation.
Livingstone, Abbott and the rest need to understand that the worst thing you
can do with a spoilt child is to pander to itâs tantrums.

Some small stuff compared to riots.
I donât live in a city or large
town, but in a large village. About 15/20 years ago local police were removed,
and were only seen if a serious crime was committed. Over time, occasional
antisocial behaviour of various kinds increased, including the torching of
cars, all night raves, property damage, drug dealing, and intimidation of
residents. A pleasant village had become in effect an unpoliced area.
The
attitude of the senior officers (when they would engage at all) was: âitâs
fear of crime, not crimeâ, âitâs not antisocial behaviour itâs incivilityâ,
âthis is not a policing problem, itâs the communityâs problemâ. From the
District Council, regarding troublemaking semi-feral families they had moved
into shiny new social housing along with decent families: âyou must
understand, theyâre victims tooâ. The community was also asked to pay for
civilian wardens to be employed, but refused. Unsurprising considering the
enormous cash contribution already being made for (absent) county
policing.
Is this is a small reflection of what happened in towns and
cities?
I do wonder if Jack Strawâs well meaning 1998 Crime and Disorder
Act has been part of the problem. Everyoneâs responsible, i.e. nobody is.
I
still think most of our frontline police and PCSOs are good. The problem is
the woolly heads making policy.
And yes we have things under control again,
for now. It was achieved by targeting known problem families. It didnât take
huge resources, but it did take local knowledge.

And the police will know them very, very well. They knew Duggan, didnât
they?