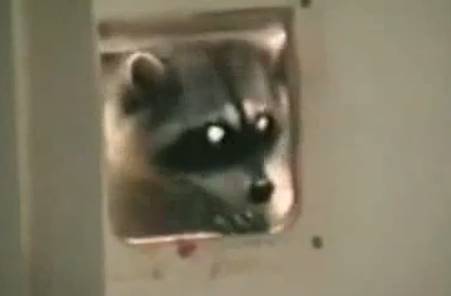 I kid you not, the esteemed landlady of the Raccoon Arms has been caught in the act.

We have to be sympathetic.

I hear a rumour that the post-operative diet prevents even the addition of a single sultana to the daily porridge.

[Update: As and when videos of Anna’s recovery become available, I’ll aim to post them in the 10pm slot.]

I think that Lagavulin and Laphroaig are sultana free, and anti bacterial
as well.

Sheâs so intelligent too. She lifts the cat flap back to allow the carpet
to be dragged back out. If she had just gone in like a cat then the flap would
have caught the carpet.

I hear the modern Raccoons wear hoodies, is that true?