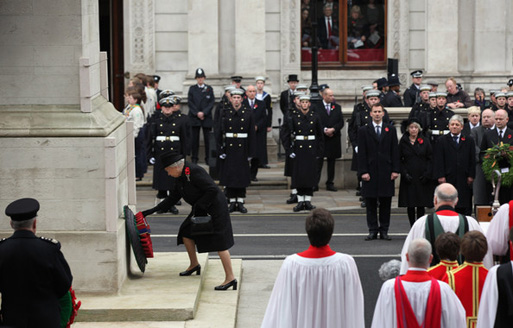 Two very disparate characters, both male, though I hesitate to refer to both of them as âmenâ. Only one is deserving of that denomination.

Two men in two different prisons. One in Wandsworth prison, one in Leeds.

Both truculent, disobedient and awkward characters.

One, Charlie Gilmour, step son of a man decorated by the Queen, an invitee to Buckingham Palace parties; in Wandsworth prison for violent disorder whilst involved in an incident designed to both disrespect and cause alarm to members of the Royal family. He is supported by an army of left wing hacks, a fond family, and acres of print concerning the hardship he is facing in prison.

Gilmour is young, hale and hearty, and will return to a privileged lifestyle.

The other â the other is scarcely worth mentioning his name, for I doubt you will have heard of him. He is called Norman Scarth.

Scarth is an 85 year old war veteran. Scarth didnât swing from the Cenotaph whilst out of his mind on drugs.  He wouldnât dream of throwing anything in the vicinity of the Royal car. He marches past it every year, covered in his war medals. His only connection with the Royal Family is not redolent of garden parties and honours, but of mud and bullets, cold and danger. He dodged those bullets on behalf of the Royal Family â for King and Country. He is sitting in Leeds Prison.

Norman Scarth is as equally misguided, truculent, disobedient, and awkward as Charlie Gilmour. I have had many e-mails from him over the past few months. He is a persistent agitator, a conspiracy theorist par excellence; one of the more annoying of my correspondents; it is exceptionally difficult to keep your patience with him at times; every action on the part of the authority is upgraded with lurid language, paranoid observations, theories involving the Chief Rabbi, Archbishop Desmond Tutu and any other exotic character that floats past his mind, in e-mails that are addressed to everyone from the Queen to myself!  Nobody in authority ever âknocks on his doorâ â they only attempt to terrorise a defenceless old man by attempting to âram the door openâ. You get the picture.

âThe noble fighter for justice and the rule of law who, despite appalling levels of official persecution, has refused to be silenced and continues the struggle, bloody but unbowed. In the real world, inhabited by the rest of us, Mr Scarth is a disturbed, clearly paranoid and occasionally violent old man who is a persistent minor public irritant.â

A minor public irritant. He once forced the British High Court of recognise that he was entitled to a âpublic hearingâ when in court. The court had sought to hold the hearing in private, unwilling to give him yet another soapbox. The ensuing judgment of The European Court of Human Rights annoyed many a legal figure.

A minor public irritant who was so paranoid that when in court recently he took the precaution of recording the proceedings so that he could check whether his words were correctly recorded.

You are not allowed to record court proceedings. The response of the authorities was not to overlook this transgression, not to shrug their shoulders and mutter âBluddy Scarth again, daft old goatâ. No, they decided to âmake an example of himâ.

They sent this old man off to prison for six months. They put him in a solitary cell where he complains of the cold, they ration his writing materials and phone calls; they chuck him out of the cell for an hourâs walk in the English drizzle every day â whether he feels up to it or not.

It has been a waste of time âmaking an example of himâ, for the left wing hacks â indeed the right wing hacks â are monumentally uninterested in Norman Scarth. He doesnât come with a famous step-father who brings in lots of âkeywordsâ hits on your web site. He doesnât have an asinine Mother with a coterie of left wing writers to champion his cause. There is nothing âsexyâ about our Norman. He is just a daft old man â and fellow blogger –  who deserved more understanding.

If you wish, you can write to Norman, cheer him up. Show him that the Blogosphere doesnât just agonise over the fate of those who swing from the Cenotaph, but also of those who have every right to march past it.

If you can get to Leeds this coming Saturday 13th August at 10.00am, there is a demonstration planned for outside the prison. Many of Normanâs âconspiracy theoryâ chums will be there. At least half of them will be as awkward, outspoken, irritating, misguided, eccentric and annoying as he is â the world, and the Blogosphere, would be a poorer place without them.

Perhaps you would be kind enough to Tweet Normanâs plight, drop references to him everywhere you see sympathy for Charlie Gilmour. Blog about him if you will. Remind people that Norman will be in prison over this Christmas. Remind people that an aged and awkward war veteran should be marching proudly past the cenotaph this November, and that taking a tape recorder into court is not the most heinous crime in the world, certainly not deserving of solitary confinement.

Then you can return to the coverage of the animals looting London that the police apparently feel unable to challenge â 300 feral teenagers are a lot more difficult to arrest than one 85 year old war veteran.

The admiration of Anna Racoons writing skills expressed by some is not
shared by me. Perhaps her insults, sneers & lies are intended to be
amusing, satirical or facetios? If so, they fail badly. I am NOT âa poorly old
manâ. I am NOT âweakâ. I am NOT âa defenceless old manâ: The fact that the
Quislings who now rule Britain go to such lengths to silence me indicates that
they are frightened of me, old though I am. Though I have marched past the
Cenotph in the past, I would certainly not do so now. In the Royal Navy on the
Arctic Convoys we saw ittle mud, or bullets either. We did see shells,
torpedoes, depth charges etc. I am, it seems, âone of the more annoying of
(your) correspondentsâ. In which case please supply your email address, &
I will ensure that you never receive any from me ever again. Norman
Scarth.

With such robust sentencing we should have a land fit for heroes â instead
of zeroes.

First class as ever Anna.

Society always needs the awkward people. The people with very unusual
ideas. The weird ones. Even some psychotic ones. People who are self
destructive.

Some of these people invent things or solve problems. Some draw things.
Others write things in words or sound. It also builds up to the rich
experience of a full and functioning society.

Yes, they can be irritating, cause problems, be difficult. But the sign of
a good society is handling such people appropriately. They donât need treating
the same way as a violent serial killers. Some leeway is needed. Life is not
black and white, itâs a whole series of shades of grey.

The progressive attitude to making everyone equal leads to a boring
soulless society.

But every time the full panoply of the state descends on awkward old
buggers who have done no real harm, whilst simultaneously ignoring real and
dangerous threats to the Queenâs peace, our respect for âthe authoritiesâ
takes another lurch downwards.

As Sozhenitsyn (I think) observes somewhere, when decent law-abiding
citizens refuse to shake a gendarmeâs hand, things are bad indeed.

We havenât (quite) reached that stage yet, but the danger is clear.

Agreed â and many more are starting to realise this.

Thank you for this.

Can you alter the spelling of his name? You have two versions: Scarfe and
Scarth. Scarth is the correct one.

For any Twitterers, we have created a hashtag- #FreeNormanScarth

Letâs get this poorly old man back home.

My apologies Ranty â I have changed all the references to Scarfe.

Iâve copied as many characters as âEmail a Prisonerâ allowed me to my
daily email to Norman. It costs Â£5 to get started and 30p per email to
keep the service going. You need his prisoner no A1903 CF and Leeds Prison
as the recipient.

Norman is no. 27 among my over 30 cases of white collar crimes, but
Norman has been physically assaulted, too, without the Police
investigating. He has experienced a psychiatric clinic, and we fear that
âtheyâ will section him for life. See http://bit.ly/pXqfmQ

You can see him on one of our videos in Westminster on http://bit.ly/91en7g

Iâll let you know what else I can dig out about him from his
emails!

With best wishes for more and more wise words from your remarkable
writing elbows,