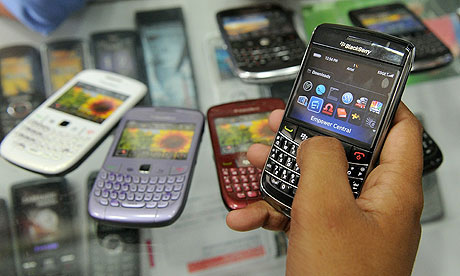 Tunisia had its Jasmine Uprising; the Guardian is crowing that the Metropolitan Police were behind the times in not knowing that London was undergoing the Blackberry Uprising.

Unlike the ‘down wiv’ da yoof’ Guardian journalists.

In order to report more effectively the disturbances around London, I have been sourcing Blackberry Messenger broadcasts, which have been useful in providing real-time updates and predictions about future incidents.

Scotland Yard warned on Monday afternoon that those “inciting violence” on Twitter would not go unpunished. Deputy assistant commissioner Stephen Kavanagh confirmed that officers were looking at the website as part of investigations into widespread looting and rioting…

However, da wiv’it Guardian journalists crow that the Met are behind the times:

The most powerful and up-to-the-minute rallying appears to have taken place on a more covert social network: BlackBerry Messenger (BBM).

Did they hand over the BBM broadcast sent on Sunday, shown to the Guardian by ‘multiple sources’, which called on “everyone from all sides of London” to vandalise shops on Oxford street?

“Everyone from all sides of London meet up at the heart of London (central) OXFORD CIRCUS!!, Bare SHOPS are gonna get smashed up so come get some (free stuff!!!) fuck the feds we will send them back with OUR riot! >:O Dead the ends and colour war for now so if you see a brother… SALUT! if you see a fed… SHOOT!”

Everyone in edmonton enfield woodgreen everywhere in north link up at enfield town station 4 o clock sharp!!!! Start leaving ur yards n linking up with you niggas. Guck da feds, bring your ballys and your bags trollys, cars vans, hammers the lot!! Keep sending this around to bare man, make sure no snitch boys get dis!!! What ever ends your from put your ballys on link up and cause havic, just rob everything. Police can’t stop it. Dead the fires though!! Rebroadcast!!!!!”

Jenny Jones, the former deputy mayor of London, blamed an under-resourced force for missing the tweets and the status updates. “It’s quite possible if they had more resources they could have picked up on this,” she said.

If the superbly resourced Guardian, with its own BBM account:

We’re grateful for any BBM messages you can send us. You can message me in confidence. My BBM name is ‘Paul’. My PIN number is 22416EC1.

Had access to those messages, then we should assume that responsible journalists would have handed them over to the Police within seconds? Surely?

Blackberry have now promised to ‘co-operate’ with the Metropolitan Police in tracing the origin of these messages, sent between the disaffected and impoverished youth of London – who can all apparently afford, or at least loot, a Blackberry.

When the Indian authorities were faced with multiple terrorist attacks where the authorities suspected that the BBM service was being used to pass messages hidden from prying eyes, Blackberry certainly did co-operate and hand over data rather than face a nation wide blackout. Saudi Arabia, Lebanon and the United Arab Emirates were all threatening to silence the Blackberry network if they didn’t receive co-operation from the company.

It will be ironic if those Blackberry’s they were so keen to ‘liberate’ from T-Mobile in Tottenham ultimately lead the Police right to the front door of those organising this mass trolley dash round the shopping hot spots of London.

UPDATED: David Lammy MP is calling for Blackberry to shut down the network to stop communication – it’ll be a curfew next.

Just remember that china agrees with you, Judge people by their friends
etc.

A limited clearance of an area to allow police to deal with disorder is not
a bad thing actually. Call it a curfew if you want.

Lammy calling for the Blackberry network to be closed down is daft. Just
like some of the other comments he has made since this started.

social media and electronic communications are part of the world now and
everybody has got to get used to it. Today there are people using these means
to organise clean ups. It doesn’t matter what the means of communication are,
whether society works or not depends how good it is.

Personally I think closing down the BBM for a few days would be good; it
would cut off the nervous system of the rioters while calm is restored. It
could also just be done 6pm to 6am.

Everybody else can function on mobiles as necessary, including the likes
of callouts to Drs and so on.

But it wouldn’t stop the rioters. All they would do is switch to
another communication method. Can they cut down every single communication
methods including talking? Nope. Most a ban would do is slightly
inconvenience the rioters, mostly opportunists, who aren’t that well
connected. Police helicopters hovering overhead with search lights
pointing are a big enough advertisement to where the troubles are.

As mentioned above, the good guys use BBM to organise the clearing up.
It’s not the tool, it’s who uses it that is the problem.

I am prepared to be pilloried for my view that only dickheads own
Blackberries in the first place, so what did they expect?

The key feature as understand it is that it is a free, secure, messaging
service, and that the handsets are cheap; ideal for teenagers.

No, Blackberries can be quite useful. It’s the sad individuals with their
Apple Chav-phones who have the wrong organ embedded in their heads. A poor
phone, a buggy PDA, but the ideal bling device for the underclass.

But … responding to the serious bit:

“BlackBerry may be losing market share in the States, but in the UK,
BlackBerry beats out the iPhone as the preferred choice among teens. Among
those teenagers (12-15 year-olds) surveyed, 37 percent of young people
prefer RIM’s devices.

“Female teens, in particular, appear to have a preference for
BlackBerry handsets (44 percent),” Ofcom says. It is suggested that
BlackBerry’s popularity is driven by the BlackBerry Messenger (BBM)
service, which offers a free alternative to SMS texting. ”

Lammy’s kneejerk reaction is so predictable – at the first bit of trouble
focus on more state control, less liberty & sod our rights. Would this be
the same Lame-ducky who was supportive of the use of Twitter in Libya,
etc.?

Have you seen this one?
http://www.youtube.com/watch?v=BNmQBx2WyN0

I think your copyright symbol buggered the bottom tweet button.

Too late to do anything without losing the url.

Wouldn’t it be a little odd, as well?

Unless these devices are stocked in the shops, SIMs installed,
pre-provisioned, activated and ready to go, with no security?

They’ve got access to any number of stolen Sims.

Every cell-phone etc. has a unique IMEI number, http://www.imei.org.uk/,
independent of the SIMS. It’s hard-wired, same as the MAC address on a
PC.
I’m sure that shops will have on record the IMEI numbers of the
devices that they had in stock (or can soon get them from their
supplier/manufacturer).
Makes them traceable during use, as well as the
disabling referred to in the link.