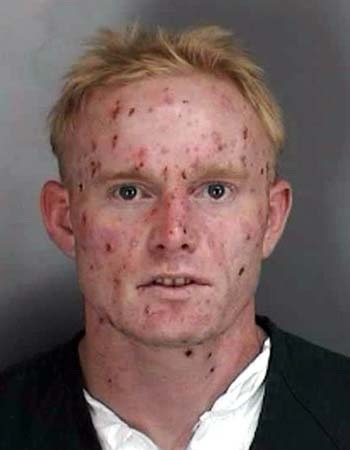 I like people who do things properly, put the research into the project, take their time, check everything out thoroughly – and then execute their task with skill and aplomb.

Thus I find Richard Handl an admirable man. Indeed, I take my hat off to him.

It’s just a shame that Health and Safety had to get involved. Richard’s fault of course, for enquiring whether their rules applied to him.

It must have taken considerable effort to amass radium, americium and uranium in sufficient quantities.

Having heated them up on his kitchen stove, his mission to find himself completely alone in a southern Sweden denuded of trees and signs of human or animal habitation was thwarted when the Police arrived, alerted by Health and Safety, and pointed out that it might take some time for them to find the exact clause, but they were sure there was something in the Swedish constitution that made it illegal to split atoms on your kitchen stove…..

I was reminded at first of some of Ms Smudd’s culinary experiments which have a similar scorched earth effect, but without fusing the neighbourhood into a large glass bowl. Mr G’s Pilchard Curry denudes the area of human habitation, but the animals appear impervious to it. Nil marks to either of them, Mr Handl still reigns supreme.

There was a close contender in France some years ago; a subscriber to an internet forum innocently wrote one day that he had two large gas cylinders that he wished to turn into a barbeque – his brother in law was arriving from England shortly with oxy-acetylene equipment and he wanted advice on the best way of going about his task. The first respondent enquired whereabouts in France he was – Brittany was the reply – hmmn, said first respondent, I’m in Provence, too damn close – DON’T TRY IT!  There was a whip round amongst those who lived considerably nearer to buy him a ready made barbeque.

Hahn’s first brush with authorities came in August 1994, after police stopped him during an investigation into neighbourhood tyre thefts. Officers found radioactive materials, chemicals, rocks, plastic and glass bottles and two exploded pipes in his car.

In a subsequent interview with a state health official, Hahn said he had been trying to produce energy and hoped it would help him earn his Eagle Scout badge. Hahn also acknowledged having a backyard laboratory in a potting shed at his mother’s home in Oakland.

David’s Father gave him The Golden Book of Chemistry Experiments.  By age 12 he had digested his father’s college chemistry textbooks; by 14 Hahn had been removed to the potting shed after his Father had discovered him manufacturing nitro-glycerine in the basement of the family home.

Authorities declared the potting shed a hazardous materials site and sealed it.  In the shed, radiological experts found an aluminium pie pan, a Pyrex cup, a milk crate and other materials strewn about, contaminated at up to 1000 times the normal levels of background radiation.

After the moon-suited workers dismantled the shed, they loaded the remains into 39 sealed barrels that were trucked to the Great Salt Lake Desert. There, the remains of David’s experiments were entombed with other radioactive debris.

Hahn received his Scouting merit badge for atomic energy in 1991…

David Hahn is now in the Navy, where he reads about steroids, melanin, genetic codes, prototype reactors, amino acids and criminal law. “I wanted to make a scratch in life,” he explains now. “I’ve still got time.” Of his exposure to radioactivity he says, “I don’t believe I took more than five years off my life.”

Let’s hope the right Hahn doesn’t find out what the left Handl was up to.

“For the benefitte and Relaxationne Of Severalle Bloggers and Random
Members of the Public!” Etc Etc!
I have to say I’m still in favour of
freedom, which would in my view, largely include freedom to experiment, er,
perhaps with some reservations. Those exact reservations are I admit, hard to
define. I’m still, in other words, uneasy about allowing the State to define
for us, what is and is not “safe.”
Surely the most striking discoveries,
including those which conventional (and therefore officially accepted) science
has given us, have often been made by those willing to “think outside the box”
of the ideas of the time?
Not at all that I am trying to condone this
particular person’s behaviour/experiments, please understand. Even so, let’s
face it, it was not so long ago it was taken seriously that humans may
suffocate at speeds in excess of thirty miles per hour, and for years on end
that it was ridiculous that women may be able to vote. It was not so long
ago.

No, it can’t be zero. Infinity divided by infinity could arguably be
anything, other than zero. Apart from that, no more can be proved.

(Puts tin hat on, and hides in bunker).

Surely infinity divided by anything is still infinity?

(Erm – any more space in the bunker, Zaphod?)

Reading these last few comments is yet more evidence why advance
nuclear experiments are best done by ‘experts’.

I’m not altogether sure about that. ‘Ex’ is a has-been, and ‘spurt’
is a drip under pressure.

There’s a long and honourable British tradition of amateur
contribution to science. You just have to accept the occasional blind
alley along the way, that’s all.

Depends on which trans-infinite cardinality ( א ) your infinities
possesses. The answer can definitely be infinity of the same cardinality
as the numerator, 1 or zero. I’m not sure that any other answers are
possible.

No, I’m not having zero. I don’t care if you are a Cardinal.
Or
even L Ron Hoover of the First Church of Appliantology.
So there.

The result of infinity divided by infinity can be anywhere between zero and
infinity.

Perhaps the travails of the Raccoon/Smudd kitchen and the nuclear
experiments should be combined. Messrs. Hahn and Handl, with all those
saucepans, may have been trying to introduce the world to self-cooking mince
(or possibly, in Handl’s case, self-cooking moose).

So contaminated by 1000 times background levels. If I have read the chart
at http://xkcd.com/radiation/ correctly, that’s only a little
bit more than that received by a person having a CT scan. So not that
dangerous really.

Splitting infinitives however is extremely dangerous, infinity divided by
infinity is infinity but if you started with infinity and you are left with
infinity where did the rest go? Is that the source of some untold power that
will drive the human species for the next million years?

Well, I don’t know.
I used to be a bit like that as a kid and nearly
blew myself to pieces with what was effectively a pipe bomb (my dear deaf gran
came to the back door and asked looking totally startled: “What was that?” –
probably shook the house), and my dad was like that, doing experiments with
beryllium that probably took years off his life, and as a kid wiring up his
indulgent mom’s kitchen in ways that probably would not meet Heath and
Safety.
I think the robust attitude is good but, well, look at his
face.
The idiot has done horrible things to himself.
I suppose if that
is what he wants to do then he should be free to do so but perhaps he needs to
understand a bit more about life.
Perhaps the nanny state has, indeed,
robbed him of his own ability for self preservation.
And that is the
greater problem: we cannot get away from our human nature no matter how much
we regulate and legislate.
We need to deal with reality rather than try to
apply patches that simply peel off. No matter how well-intentioned those who
applied the patches may have tried to be.

Libertarianism gone one stage too far?

Nuclear experiments are at least one thing I am content for the state to
have a hand in.

And that is the reason we don’t have ‘too cheap to meter’ nuclear derived
electricity today.

Perhaps not the only reason. Possibly it is the reason everyone is not
walking around with radiation sickness though.

If I really thought nuclear science would be advance by dedicated
Englishmen in sheds, a la clockmaking, I may well support it. However,
evidence would point to teams of heavily credentialed people with
multi-zeroed research grants as being more effective.

How do you know if nobody can try?

(I hate to go off topic, but wouldn’t it be wonderful to see the smug face
of Piers Morgan become embroiled in the latest phone hacking scandal.)

Nay, nay lass, the lamb was a triumph Hester Blumenthal would have been
proud of……

Mind you, there remains the slight possibility that Heston Blumenthal
may have held a mildly divergent opinion….

Possibly, Engineer: there wasn’t a single porridgy snail in my lamb
dish – at least not intentionally…..

Nothing wrong with adding flavour to a dish, and there’s much to be
said for slow cooking. Besides, if you added some porridge to a lamb
dish, you could have the left-overs for breakfast next day.

Gloria, it’s only because La Raccoon has never suffered at the hands of
my kitchen that you attract opprobrium.