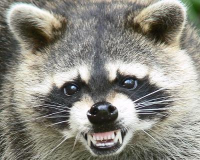 Whoâs scared of the Raccoon?

Many people have phobias. The phobia about the number 13 is Triskaidekaphobia whilst Friday the 13 is Paraskevidekatriaphobia. In Asian countries it isnât 13 thatâs an unlucky number but 4 and it is called Tetraphobia.

But if you are scared of Raccoons like Ms Katie Holmes  then what is it called?

Who is Katie Holmes?

Is a raccoon a badger in fancy dress, or is the other way round?