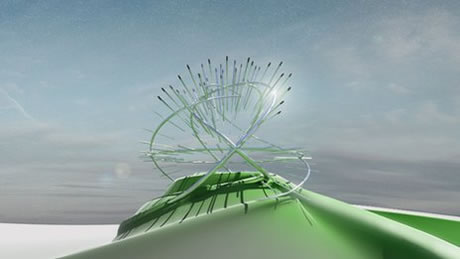 As Ms Raccoon languishes in the concerned ministrations of those determined to ensure her convalescence is full of fun and frolics, I thought she must need a little Celtic input to stimulate her emotions.

A couple of weeks ago it was announced in the Scottish press that a work of public art would be erected on the A74 at the England/Scotland border. The idea was generated by the Gretna Landmark Trust who appear to be relishing the challenge of erecting a monument which they hope will challenge The Angel of the North.

The winner of a competition to provide a symbol which included ‘energy’, ‘innovation’ and ‘the river of identity runs deep’ was Cecil Balmond and his contribution entitled The Star of Caledonia (pictured). His description of his creation:

“The Star of Caledonia is a Welcome; its kinetic form and light paths a constant trace of Scotland’s power of invention and I am delighted to be collaborating with Charles Jencks to create an integrated idea of this concept in both landscape and form.”

That’s it then – sold to the woman with the blonde hair. Then reservations set in. What was the cost of this work of art? How would it look after a few years of being beaten by months of extreme weather? No price has been ofﬁcially announced although sums of between £3 million and £10 million have been mooted. As for it standing the test of time, it may well do, in a rustic way.

It is hoped to have the artwork in place in time to welcome visitors from south of the border to the Commonwealth Games in Glasgow in 2014.

Do you like the idea of being welcomed to Scotland by this image? At my place I have a wee poll running and if you would like to give your opinion you can do so here.

Thistle do the noo!

…or if they’re feeling in a mellow mood, ‘Welcome to Scotland’.

You’re quite right. The simple answers are usually the best.

There has always been a need for a ‘something’ to mark the border between
England and Scotland.

Driving up the M1 -M6 to Scotland, there is no specific signing for
Scotland until way after Preston. Prior to that there is the all encompassing
‘North’. The current signage at Gretna whilst functional simply blends into
the landscape beside a tacky retail centre. The majority of drivers heading to
Scotland only realise they are in Scotland when they hit the hills around
Moffat, some 30 miles north of the Border.

Where this piece falls down, is in the selected piece and the selection
process. The net was cast wide, yet only caught those who had worked with or
were known to the creative director. In the following link the selection
process is damned by the man himself, who claims those who entered must have
completed a large scale work previously, this codicil was never in the
original brief.

As to whether the ‘Star of Caledonia’ follows the brief of a ‘kinetic,
optical moving structure’ is open to reinterpretation. It certainly doesn’t do
‘Art’. Unfortunately it appears to be a big shiny metal thing that people will
glance at 70mph.

Somehow doesn’t have the presence of the black bull at la Junquera, or the
dangly bits.

With the exception of Old Slaughter – I do hope they improve his medication
– it seems nobody is enthusiastic about this creation of public art meeting
them at the border. Anna, you have such sensible readers.

Either way, I think it exquisite. But its late and I’m on stuff.

Didn’t Hadrian do some sort of greeting construction. Worked quite well
to,

This would never have even be proposed if there was a large national
debt.

Is sort of reminiscent of a thingy what they put up in Manchester (at vast
public expense) some years ago. IIRC bits kept falling off and it outraged the
dreaded Elf of Safety and it had to be undone (also at vast public
expense)

Or senility could be clouding my memory – I stand to be corrected by any
that know better.

If we’re thinking of the same one, it was called ‘B of the Bang’, and
looked like a giant dandelion seedhead. I think the ‘Bang’ was the noise
made by the inadvertently detached bits hitting the ground.

If that’s the image that represents Scotland, then God help the Scots. Not
exactly recognisably Scottish, is it?

No, I’m not being sarky about Scottish artistic taste – England is no
better in that regard. Both nations lost the plot when they allowed ‘public
taste’ to be dictated by arts establishment academics funded by public dosh.
It won’t improve until all public arts subsidy ends.

It’s a long time since I drove up the M6 to Scotland, but at the border
there used to be a rest/services stop with a wondrous emporium called The
Canny Scots Shop. You can imagine the contents – acres of ultra-Caledonian
kitsch. Quite hilarious, always brought a smile to my face, and provided great
material for winding up Scots acquaintances. Far better border ornamentation
than the absurd, boring, expensive “sculpture” under discussion.

I don’t suppose many people will think it inspiring or redolent of
anything.
What a crashing waste of time and money.

That is precisely what Scotland needs! A representation of a dandelion seed
head, sitting in a barren landscape, kinda represents its once proud
shipyards.

It’s a regeneration project, and has taken six years to get to this point,
lots of jolly meetings with expensive consultants. My guess is they have
already pissed away GBP3million, final cost to be determined-my guess
GBP25million taxes flushed.

If ever there was a need for someone to be put in psueds corner, the author
of this description of so-called artwork is surely in prime place.

It reminds me of one particularly explosive sneeze which was ‘shared’ all
over our just-served Christmas dinner. The whole thing had to go in the
bin.
Honestly. I kid you not.

If it’s paid for by voluntary public subscription (as I believe Nelson’s
column was) knock yourselves out, as long as you do it on private land with
the consent of the owner.

If any of those conditions are not met, you are effectively saying “pay tax
or we will jail you, to pay for this” Tony Soprano would be approve.

No surprise that taxpayers’ money is involved SAOT.

It had the same effect on me – a series of little pricks running round in
circles and finally firing off in random directions surmounted on a swirl of
green folding stuff…is this what they mean by ‘representative art’ these
days? How is the Scottish Parliament doing?

Don’t you just love it when politicians spend other peoples’ money on
vanity projects.