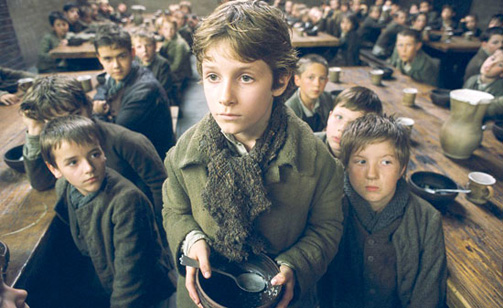 Is it worth the waiting for?
If we live âtil eighty four
All we ever get is gruâ¦el!
Evâry day we say our prayer â
Will they change the bill of fare?
Still we get the same old gruâ¦el!

I think the tax payer should feed my Mother, free of charge, for the last 20 years of her life.

I think they should heat her house, pay her rates, clean her room, wash her sheets, provide someone to play Bingo with her, make her tea in the morning, make sure sheâs tucked up in bed at night.

Itâs quite outrageous that she should be expected to support herself if she can â I mean the people who canât already get help from the tax payer â why shouldnât she?

Just because she didnât have a heart attack? She should have to feed and house herself, already? I should be deprived of the Â£250,000 the lovely house that my dear departed father bought 30 years ago, will bring?

Every media organ is full of tales like this, that Andrew Lansley, expecting people to feed themselves; itâll be the end of this government.

Meanwhile, over in Horn of Africa, tens of thousands of children are walking for weeks across a parched landscape, without their parents, in the hope of reaching food before they die.

The malnourished children, some of whom become separated from their parents on the way, are now arriving at the camps in northern Kenya at a rate of 1,200 every day. At the largest, built for 90,000, there are now nearly 370,000. Many have covered hundreds of miles on feet that are bare and bleeding. Some reach their goal barely able to stand. Most are exhausted, and dehydrated. All are hungry.

Some children whinge over nothing, some donât have the energy to whinge.

Isnât the problem that those who have assets must exhaust them in old age;
and those that donât the state bails out? The same schism is appearing in
pensions â haves (public sector) and have nots (private sector).

I would like to put in as word for elderly fathers being fed as
well.
Did not all this start with feminism deciding it wanted not to have
babies but to have careers?

Hey Anna â good to see you back again

The sense that everyone is entitled to have as many kids as they want, then
have themselves and their family fed, housed, educated, nursed and then buried
has clearly fed the kind of statism that people want â most people expect the
land of milk and honey, with someone else invariably picking up the tabâ¦

In a perfect world I would agree, we should take responsibility for our own
needs.
However, why should I save and live sensibly all my life to have
savings to take care of myself in later years when other people, many with as
much income as me, have spent a life on the sofa or spent their money on
frivolities, and made no such provision? It means I have to pay for both
myself AND them, hardly a fair outcome is it?

What âEnglish Vikingâ said. If only the same insistence on self reliance
and chipping in was applied to the never will contribute brigade who produce
large numbers of benefit babies.

How many times have similar famines happened, only for short-term aid to
relieve the immediate problems, but do nothing to prevent the inevitable
recurrence? At least they have not yet had to suffer from a vist from
Geldof.

As for elderly care, I have been investing all my working life to cover
mine, when Iâm too old or decrepit to earn. The policy is called National
Insurance.

The idea that I should be solely responsible for my own expenses is fine,
so long as thieving politicians keep their hands out of my pockets.

As they donât, never have and never will, I expect to be able to claim on
the insurance policy I am forced into paying for, at a grossly inflated rate,
because my premiums have to cover the cost of those who refuse to work as well
as my own.

I seem to remember the late and unlamented Barbara Castle telling us that
there was no need to save for our futures since the State would provide for us
from cradle to grave. I also remember The Economist describing her speech as
gross financial irresponsibilty. Anyone have any thoughts on who was right as
we march into the sunset?

As, if and when my elderly mother requires residential care, then it is up
to me, my siblings and indeed my mother to fund it. If this means we end up
receiving nothing as the proceeds of the sale of her house are used to fund
the care ~ so be it. Of course, medical needs notwithstanding, she could come
and live with one of us.

So whilst I donât agree with the idea of state funding for elderly care
except in extremis, you can see why some people are angry ~ they are raped by
the tax authorities to fund others but have the state care concept
inconsistently applied leading to their own impoverishment.

Not only âuselessâ politicians but corrupt politicians â Westminster
included.
As for that load of drivel in the main post, Anna, most people,
the vast majority, do indeed look after themselves or have loving family
members to look after them, very few need to be looked after by the state, if
the latest BBC documentaries are anything to go by, very few would want to be
looked after by the state.
A tiny minority of Englands elderly end up
needing state intervention and the majority of them pay up and get on with
it.
All this panic is about what happens in the next 10 to 20 years when
the ageing population will reach a peak. What happens when the peak is reached
and the numbers start to decline, are we going to have an army of carers with
no one to care for? a surfeit of houses lying empty?, schools and hospitals
being being demolished through lack of pupils and patients?
Donât believe
all you hear, itâs just another fear mongering story. If Iâm around in 20
years time Iâll be able to say âI told you soâ

All this panic is about what happens in the next 10 to 20 years when
the ageing population will reach a peak.

But wasnât that going to be âfixedâ by uncontrolled immigration? Will
those immigrants leave post-peak or will they in turn become elderly
creating a new peak which will be âsolvedâ by yet more immigration.

Sustainability or Growth? We canât have both.

As for the thousands of children, including their parents (not all are
seperated from their parents) they are only attempting to go to somewhere
where there is free food. They just canât afford the food where they live. So
they go and get the free charity food which takes months to organise and
transport to the country. If the charities just gave money/vouchers to use to
get the food that does exist then there wouldnât be a problem. But then there
wouldnât be much need for the charity.

The people in the horn of Africa although much worse off are suffering from
the same thing as us, incredibly badly managed economies, and useless
politicians, they also having the additional problem of unelected dictators.
Sorry, mistake, we have the unelected EUSSR sucking at our teat as well.

At the risk of me banging the same drum daily, if savings are made by
reducing the benefits-culture within the UK it seems that the same amount of
money is then thrown
away on bail-outs and increasing EU
danegeld.
Like the quote at the start of War Of The Worlds about being
studied by those with evil intentâ¦

Thank you â it seems that these are, almost, unthinkable thoughts to most
people, but I agree.