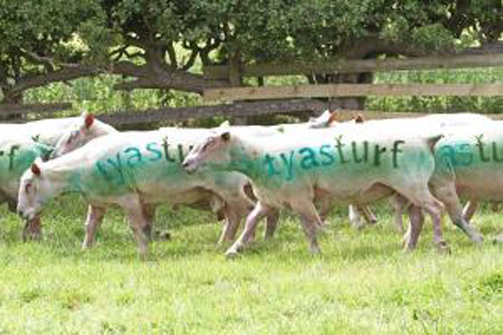 I can see this catching on – imagine the M40 running through the Labour strongholds in the Rhonda Valley, lined with bleating manifesto promises. Politicians really will be able to eat their words once the count is finished.

So far the new advertising space has only been taken up by an enterprising turf company in Yorkshire, but I can see it catching on next election.

‘Cutlets too fast, too soon’, run the woolly logos.

‘Chop the Tories’ gambol the lambs.

Come on, you can do better than me, commentators….

Go back to your constituencies and prepare for supper

Is this a case of mutton dressed as spam?

Let’s hope it doesn’t spread to cows or Mark Wadsworth won’t be able to keep up.

Changing target:
One Liberal who doesnt wear sandals…..
Follow me
into a European superstate!

and – perhaps in poor taste

Are ewe thinking what we’re thinking?

….Coleman’s mint sauce is excellent with the others!

“Why is no one Zagging?”

We’ve all been fleeced!

Not really a caption, more a rant to lamb-bast the shear nerve of the
advertisers trying to ram their wooly ideas in our faces, wether there’s
limelight or not they want to hogget to try and fleece us.

Don’t be one of us – think for yourself!!

This ones’s difficult, not many words to do with sheep, and most thoughts
were insulting to Labour. However-
“Thatcher the milk snatcher!” (printed
near ewes’ teats)
“Re-write history! Beatify (canonise?) RAMsay
McDonald”
“Down with toff barrr-sterds!
“Ain’t Gonna Work On Maggie’s
Farm No More” (used before, but worth recycling)
“Cry havoc and unleash the
sheepdogs of class war!”

As it’s me, a bonus bawdy one –
(printed near ram’s penis, with a view
to possible Lab/Lib coalition in 2015)
“Any chance of a Cleggover?”

I think it would be more fun to put a single letter on each sheep and let
them decide what message they wanted to send by the order in which they lined
up.