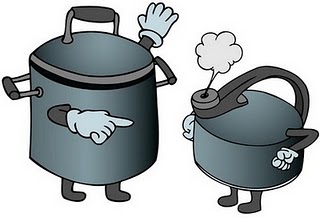 Alastair Campbell, speaking of the Sunday Times ‘made up quotes’ (not an entire dossier!).

Will we see a finer example of the pot ‘calling’ the kettle this year?

So Alistair seems to think the media less honest since his departure?

Can he really believe this? If so, one wonders about self-imposed cognitive
dissonance and mental health, If not….ahh, I can’t even act surprised.

If Alistair Campbell told me it was Tuesday, I’d find a calendar and
check.

He might like to reflect on the possibility that the shift in the balance
of probability in the believability of anonymous quotes may have been
contributed to by the placing of “unattributable quotes” in the ears of the
press by one A. Campbell during his tenure as government press supremo.

To put it more directly, he caused it.

Similar to Pot, Kettle, barmy polly et al, bloging that attacks on balls
are motivated by fear of his genius.
It never crosses their minds , that of
a pretty loathsome bunch of politicos, balls is widely regarded by the public
, as the most repugnant , repellant, specimen of the lot and there is genuine
delight at his hypocricy being exposed.

Cats on the blog may wish to avert their eyes, there’s an Analogies ‘R Us
(motto:we hold these truths to be self-evident.

Pit Bull = Campbell. Clamps on and won’t let go. Attacks for no discernible
reason. Can self-medicate which worsens the problem.

Dachshund = Red Ed. Yaps a bit but nobody takes it seriously. Ridiculous
appearance.

Collie = Cameron. Tries too hard to please everyone. Pedigree versions tend
to be less robust than mongrels.

Rescue Dog (any breed) = Clegg. Cowers in corner after lifetime of neglect,
even badly treated by it’s own siblings.
Best taken to the vet for a
peaceful end to it’s misery.

Should clarify, ‘self-medication’ is about his admission in a TV
interview, not the allegation that was made in an overseas-based blog.

After considerable thought I feel sure Cameron is more poodle dressed up
as a golden retriever.
I know Blair was supposed to be the poodle but I
think they actually came from the same litter.

You read it here first.