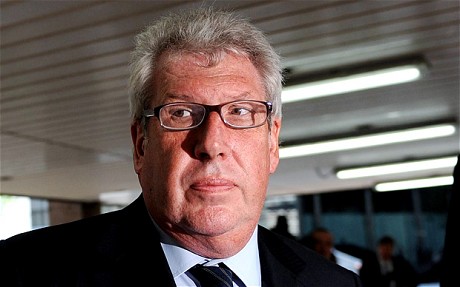 With apologies to the Beatles

Elliot Morley
Pays off his mortgage and pockets a cool sixteen grand
All cash in hand;
‘Sloppy accounting’,
All a mistake and there’s nobody else he can blame,
Oh, what a shame!

Abuse of the system
Siphoning money into his investments for years
Ended in tears;
In mitigation,
Downing Street battles and strife with an enemy there,
A good friend of Blair.

Elliot Morley,
said Justice Saunders, had quite thrown away his good name,
Covered in shame.
Sixteen month sentence,
Convicted for making deliberately excessive claims;
The end of his games.

One cannot help thinking this site needs ‘Like’ buttons.  The
‘ballard’ itself and many of the comments so deserve commendation.

(I often think that those ‘Like’ — and ‘Dislike’ — buttons need to be
supplemented by ‘Concur’ and ‘Dissent’ ones :  after all, one might
agree with a comment but dislike it and so on.)

I’m waiting for the ballad of Andrew Withers.

Maybe it can be a single released by LPUK?

Not a ballad ,just a cheerful little verse, and not mine either.

I wish I were a glow-worm
I never would be glum
How could anyone be
miserable
When the sun shines out your bum.

Anna could have meant bollard…

Worthy repertoire at our folk club!

Ta, Shades; if you fancy a political singalong, there’s plenty more where
that came from – just go to newgatenews.blogspot.com and click on the label
‘song parodies’.

Amazing that so many of the members of the Lords and Commons are prey to
sloppy accounting, failure to keep proper records, do not understand the
rules, cannot work out exactly what they are doing, get very confused when
faced with difficult facts, tend to react negatively to criticism, are quick
to blame others and cannot admit to mistakes. As for the Commons how did they
ever get elected and for the Lords who were the idiots who appointed them?

Demetrius, I can tell you why the quality of the lower house is so
low :  universal equal suffrage.  But how now shall you
reverse the Reform Acts ?

You are precisely right about the upper house :  the problem
lies with the appointments.  This is counter-intuitive ;  one
might have thought that the ability to choose the members of a legislative
chamber would confer quality upon it — till one recalls that those making
the appointments were elected by … universal equal suffrage.

I normally eschew the ad hominem attack but shall allow myself
the indulgence of observing how appropriate Mr. Morley’s porcine appearance
is.

Great lyrics. Another one of ‘Blair’s Babes’ (as in the pig film) ends up
in the slammer.
Blair’s face looks like Al Joleson’s these days “Money, how
I luv ya, how I luv ya, my dear old money. I’d walk a million miles, to add to
the pile, my dear old money”.

I think this specimen of slitheriness was the Minister responsible when the
EU decreed that fishermen must throw over-quota catch back into the sea. For
allowing that, he should be locked up for a lot longer than he has been.

To be submitted as Ms R’s claim to be the next Poet Laureate?

It’s understandable why the entry is of such a high quality – the
traditional reward being a “butt of sack” – the modern equivalent being
approx. 477 litres (105 gallons) of sherry.

Poor elliot suffered ‘the curse of tony banks’ – which causes particularly
unpleasant things to happen to MP’s who supported the little shits’ attacks on
fox hunting.

The Ballard of Elliot Morley

As in J.G.? A Freudian slip, no doubt, on the part of a Raccoon clearly
thinking of the dystopia Morley and his ilk would create.

Apologies. My sub-editing skills went out the door. I’ll run after them
and catch them.

He’ll be out in four m0nths, wait and see.

Where do they all belong? In an orange jump suit washing the streets by
hand for 12 months, that’s where. Looks a greedy git too.

That’s actually a very flattering picture of him. It puts him within the
range of normal whereas in real life there is something swellingly pinkly
porcine about his pursed-lippery look, as if sucking the marrow out of a
bone whilst shouldering his way to the biggest triffle on the buffet on
which his beady and unwavering eye has been fixed.

That’s being very unfair to pigs who are only being themselves and no
offence to pigs is intended. But hell’s teeth, that bloke is ugly.

Hmm isn’t it a ballad?
Well aimed though