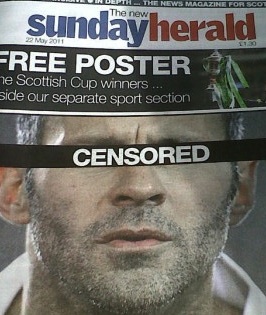 The Scottish Herald appears to my southern eyes to be a strong supporter of Alex Salmond and thus his desire for independence from the UK. Scottish readers are free to disagree with me on this point.

Is it any accident that it was the Scottish Herald who emblazoned their front page with a barely disguised picture of the man known as the Hugh Bonneville of the footballing world?

The practitioners behind the current crop of privacy injunctions have an interesting back story.

Both Keith Schilling and Robin Shaw were nurtured at the knee of the legendary Oscar Beuselink who rescued the firm of Wright Webb and Syrett from obscurity and turned it into the most media savvy law firm of its day.

Schilling emerged from this apprenticeship as an arch advocate of privacy for media clients except in exceptional circumstances – Shaw emerged as chief defender of Ian Hislop and the right of Private Eye in particular to print whatever it pleased.  A not inconsiderable testament to Beuselink’s ability to demonstrate both sides of an argument!

Beuselink was a showman and self publicist as much as a lawyer and nobody would have enjoyed being centre stage as Westminster and Scotland fought out the merits of unification more than he.

Scotland had its own independent judicial system; however, Derry Irvine’s decision to bring in a Human Rights Act 1998 which applied to all of the UK had the effect of binding Scottish courts to decisions made by crusty old judges down in London.

Mssrs Schillings & Co’ frequent excursions to the London High Court to obtain ‘privacy’ injunctions, which would not be valid in Scotland, were it not for the fact that they are issued under the Human Rights Act, cannot have pleased those pushing for more, not less, independence from Westminster.

I wonder whether the media organs pressing for the right to publicise the sexual habits of the most searched for names on the Internet to keep their ‘on-line’ presence healthy had intended to set a political hare running as well?

Will the Scottish judges determine future independence by declining to hold the Scottish Herald in contempt of court for their actions? Will they uphold the decision of their Southern counterparts?

– And they say the UK is a land ruled by toffs and aristocracy? Huh!

The Scottish Herald appears to my southern eyes to be a strong supporter of
Alex Salmond and thus his desire for independence from the UK.

You have got to be joking.

The English legal system and Scots legal systems have always been separate.
The blairite cockend Derry Irvine tried to make the English Supreme court
superior to Scottish High court. In the Scotland act there is provision for
the English supreme court to hear cases related specifically to
Devolution.

This is the legal equivalent of appealing a French ruling to German courts.
They are also in a political union but a no point did we have union for
Criminal cases.

Previously the House of Lords could be appealed to.for Civil cases.

Off on a tagent. I started writing about Giggs injunction and deviated to
Supreme court quashing Nat Fraser verdict in direct contradiction of 7 of
Scotlands most senior judges. None of English judges are qualified in Scots
law which has evolved over 1000 years.

You can take our freedom but not our court of appeal. LOL

I live in Scotland, but have never bought the Herald so i don’t know if
it’s a SNP supporter. But since Scotland has a separate legal system any
Scottish publication which is not sold in England would be free to have
mentioned e Ryan Giggs or anyone else by name that had taken out a super
injunction.

I note that a Schillings bod was on the Committee which did the recent
Privacy Law Reform report.

Personally I think it all needs a scorched earth clearout.

This is the third or fourth time we’ve been round this loop since I stared
blogging in 2007. Alisher Usmanov, then Tiger Woods, now this.

Picture of the year contender?

Full herald article at my place. Illegal to view if you live in england or
wales of course!

I suspect the Scots feel towards the English much the way many of us feel
about the EU, that our independence has been nibbled away in the shadows, and
we all want it back, so this is has become a highly political issue.

You naughty Racoon… I saw what you did there! Watch yourself!

I have been much pre-occupied by other matters lately as our learned editor
knows (best regards). This is an interesting story. As it happens I am a Red –
no, not in THAT way, but as in a card carrying non prawn sandwich eating Man U
fan. Occasionally”back in the day” I used to bump into Giggs in Manchester
(quite literally once) though I didn’t know him. A slight figure with eyes as
black and deep as a shark oddly. As it happens, word on the street is not only
that he is a consummate pro but a really decent bloke down to earth bloke who
does a lot of charity stuff without publicity . He’s got a a lovely wife, two
adorable kids and doesn’t as far as I am aware court publicity or trade on a
“family man” image. He just does what he does best – plays football, Compared
to a lot of footballers he’s Mother Theresa. If he has strayed from marital
fidelity I am hardly surprised – I suppose if Imogen Boobjob (Miss Rossendale
1999) threw herself at me I might fall to temptation. Neither am I really
interested. So, then, why am I such an advocate of busting this injunction
wide open? Because these are being mis used and present a clear and present
danger to the freedom of the press. They are the play thing of the rich and
famous and powerful, and the legitimate public interest in making sure these
people cannot use the law to crush free speech. If Fred the Shred, who played
a key role in bringing his bank and perhaps the whole banking system to the
point of collapse so that it has had to be propped up with my money, turns out
to be Fred the Bed the Bonking Banker – I DO Want to know. Twitter is not a
democracy, but it is a good indicator. In a democracy, no law should survive
without broad consent of the people. The judges need to be reminded that they
are servants of the public, not lords upon high. Sorry Ryan, you are
“collateral damage” in a wider issue. If you had let it be, your story would
be last weeks page 7 news. I strongly suspect you have been badly advised by
the ever greedy lawyers. Good luck on Saturday though.

Sorry for the odd typo – still half asleep!

Laws that are seen as protecting minorities are rarely popular with the
majority. It is these laws, though, that separate the brutality of raw
Athenian like democracies from the more civilized regimes we work towards
today. It is particularly difficult for this type of law to gain any level
of acceptance when the Press stand foursquare against it. There may be a
case to suggest that the opposition of the Press to any kind of personal
privacy is based on commercial considerations rather than the public’s right
to know. Indeed, Mr Spearman, for the Sun, rapidly withdrew the public
interest argument in the Goodwin case – perhaps he was wrong?

It is not difficult to understand why Mr Hemming needs the support of the
Press in his campaign against overbearing local authorities whose conduct is
sometimes masked by the privacy of the CoP and the family courts. However,
Mr Hemming’s cavalier approach is now in danger of damaging both himself and
the campaign to shed more light on the workings of the parts of the justice
system where it is really needed. Perhaps, in this instance, it is more a
case of friendly fire than collateral damage.

Thank you for the kind words; I didn’t expect you to agree, but there
was no need to shout.

I’ve just finished watching a debate linked from Carl Gardner’s blog
(the luxury of retirement). Something is going wrong for Mr Hemming when
an editor of the Evening Standard agrees that it is not for Mr Hemming
to unilaterally decide which injunctions should be broken, and to accuse
him of taking nonsensical points.

I should say that I don’t doubt Mr Hemming’s motives, just some of
his methods.

It’s the Scottish Sunday Herald, Berenike….I wrote that piece yesterday
morning in between loading the fridge freezer, and an eight foot long
kitchen table since I am in the middle of moving house and trying to keep up
with the blog at the same time – I do apologise for inadvertently dropping
the word ‘Sunday’…..sloppy I know, but perhaps you would forgive me under
the circumstances?

Lots of irate jocks popping up on guido’s, to explain that the Herald
is not an snp rag, but tends to be in cahoots with labour.

Well, maybe this once … (It was actually at least half a genuine
question, and not snottiness, because I have always been vague about which
paper is which and for all I know there might indeed be a Scottish
Herald.)