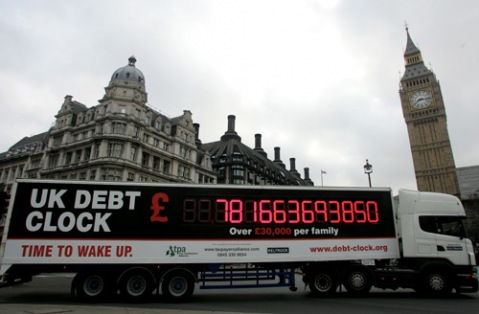 At 11am this morning, Libertarians and all those who believe in simple thrift, honesty, and personal responsibility will be gathering at Old Palace Yard in Westminster to demonstrate their support alongside Old Holborn, Guido Fawkes, Mark Wallace and others who have been desperately trying to get the message across to a population indoctrinated by the main stream media into the belief that ‘savage Tory cuts’ will mean old ladies dying in the street and new born babes being fed into the MacDonald’s hamburger machine.

Britain is teetering on the edge of debt implosion. We still have a reasonable credit rating, thanks to the fiscal austerity of the coalition government – but we are using that to borrow money to lend to the fiscally incontinent. Why?

What have the Irish done with that money? What do the Irish normally do when they get their hands on a few bob? They are throwing a massive party this summer. One for President Obama, one for the Queen, one for the Pope – even the Dalai Lama and minor European royalty such as the Prince of Monaco are getting their own party.

Did you realise that we were raiding the tax on our children’s Labour to pay for a glorious summer of knees ups?

Exactly the same thing has happened in Greece. No sooner did Stavros and his petrol head mates get their hands on 110 billion than they set about spending it – not on front line services, the things they pleaded with us to save – but on a go-Kart track in dusty Patras! 94 billion Euros worth that will provide jobs for some 400 people. What jobs we are not told – selling Coco-cola from roadside stalls to thirsty go-Kart fans?

Remember the Donnington/Silverstone ‘bite your nails/will they have the money to finish the racetrack in time for Formula 1′ saga? We had no money to help bail out that chaos – and yet we dig deep in our children’s pockets to finance a race track in the back end of Patras!

This week the Portuguese have finally ‘agreed’ to accept 78 billion Euros from a fund to which we are obliged to contribute. They didn’t want it, preferring to take money from their old allies the Brazilians, but no, their arm was twisted, and they have given in – now we must borrow more money to give it to them.

It is utter madness, and yet the media continue to portray Britain as an uncaring nation, ruled by ‘Toffs’ who want to drive the working class into the ground with a ‘savage’ three year wage freeze.

The truth is that we are busy being a very caring nation indeed, and we are borrowing our children’s labour to pay for it.

One of the problems is that those who make no contribution to the state’s
coffers, but claim everything they can from the state, still have a vote. All
they are interested in is how much they can get for nothing. Perhaps a
campaign should be started, to deny the vote to those who do not pay
taxes.

The money is not only borrowed from “our children’s Labour”. The money is
borrowed from the same institutions we are bailling out. A win-win for them. A
lose-lose for us.

It’s probably part of some grand plan to collapse all currencies so a
unified world-wide one will be imposed on us, Anna. By that time of course,
there will probably be only one borderless world anyway, with no restrictions
on the movement of peoples from one region to another (you can probably guess
the direction this flow will predominantly take).

On a side note, all immigrants really enrich the cultures into which they
move, don’t they?
http://www.timesofmalta.com/articles/view/20110514/world/british-woman-beheadedin-tenerife-supermarket.365289

The pic is out of date, today’s bus had that big number prefixed by 793.
And Rab, like him or not, Guido telling of Chris Huhne’s destruction in
Sunday’s newspapers, today, was interesting.

I wasn’t able to make it, although reading that Geeeedo Fox was attending I
would have made sure I couldn’t attend.

Nothing so easy…or so wonderfully exhilarating, as spending other peoples’
money.
The mystery is why we ‘other people’ continue to allow it to
happen.

I support sound finances as much as any of the people planning to go to the
rally. But is the cause really helped by a few people turning up in town
wearing V for Vendetta masks and silly wigs?

Mighty oaks from little acorns grow. Somebody has to stand up against the
BBC meme that the cuts are evil, and point out that that cuts wouldn’t be
necessary if public finances were managed responsibly.

“All that is required for evil to prevail is for good men to do nothing.”
-Burke

Even people in fancy dress have the vote.

At least in this case the costume is consistent with the purpose of the
action.

V sought the destruction of the state after all. Meanwhile we see lots of
lefties attending protests demanding a bigger state, whilst in V
outfits…

Old Holborn provides good media cover – his V mask is recognised by many.
It was a good event, despite the relatively low turn-out. As over 400 signed
the EDM petition, the BBC’s estimate of 350 was low. “From small
beginnings…”

They won’t borrow anything from my children/grandchildren, as I don’t have
any.

Something, considering the way things are heading, I’m extremely grateful
for…

Just got back home, and catching up on Twitter. The forced laughter of the
Left is sweet…

And yet nothing in the msm about the rally today? Any particular reason
why?

Oh there has been stuff in the MSM about the rally. Ever since April.
However very few of the articles are positive.