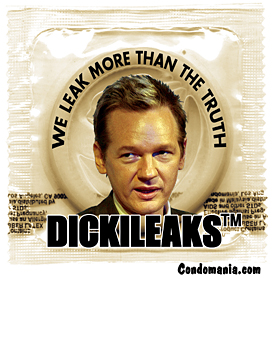 Sitting in on one of those interminable Social Services conferences, the question of the âsubjectâsâ past mental health came up. âNo, heâd never attempted suicide before, but he had been a counsellor for the Samaritans for many yearsâ, it was said with a knowing nod. âNot another oneâ came the response from across the table.

It was the first time Iâd come across the phenomena of âhiding in plain viewâ; the curiously frequent manner in which the depressive seek to counsel others; child abusers sign up to âcare for childrenâ; the larcenously inclined cheerfully become policeman; the judgemental, the censorious, and the control freaks â bill themselves as Libertarians.

âDonât look at me, look at themâ they cry â as they point a disapproving finger in the direction of another miscreant.

Who could have imagined that the King of transparency, of openness; the Guru of free speech, of total divulgence of information; the Scourge of organisations that sought to hide their holdings, the disseminator of other peopleâs secrets â was really a non-disclosure control freak?

Step forward Julian Assange, founder of Wikileaks, who now makes his employees sign a draconian non-disclosure agreement, to ensure that they do not leak any of the leaked information which comes his way, without cost, but which then becomes a valuable commercial asset. An asset that he values at around Â£12 m, and whose value he is keen to preserve from those who would leak it free of charge.

âYou accept and agree that the information disclosed, or to be disclosed to you pursuant to this agreement is, by its nature, valuable proprietary commercial information,â the agreement reads, âthe misuse or unauthorized disclosure of which would be likely to cause us considerable damage.â

So dear Julian is not just worried that staff might personally profit from selling on this information â but that his proprietary interest in this commercial product might be damaged by them, er, leaking itâ¦â¦..

You couldnât make it up. Itâs worth following the link and seeing exactly how Julian thinks those who leak information should be treatedâ¦â¦.

Guardian hero turns out to be commercial hypocrite. Gosh

He needs to run his activities like a business. The most powerful people
use very expensive lawyers to hound him and shut him down.
Is that what you
want?

has to bebetter than the Wall Street Journal leak site, as poer
Grauniad:

âreserve[s] the right to disclose any information about you to law
enforcement authorities or to a requesting third party, without notice, in
order to comply with any applicable laws and/or requests under legal process
[…]â.

Okay, so heâs personally flawed, like most of us are.
But I still think
the world is more interesting for having him in it.
And he never asks me
for money.

Sod him, hand him to the Americans.

It can only be a matter of time before he becomes an MP!

To be fair, the suicidal person is not acting consciously or maliciously by
becoming a Samaritan. They do genuinely want to help in my experience, even if
they go about it in the wrong way.

Iâm not sure the same can be said about child abusers or corrupt police
officers.

For somebody who poses as âdefender of free speechâ he appears not to like
it if it is done to him. Perhaps his concept of free speech is the freedom to
act and say as he wishes, which is of course no freedom at all.
Typical âDo
as I say, not as I doâ attitude.

Thereâs also a story in the latest Private Eye (page 6 col 2) about
Wikileaks losing out from leaks.

Apparently Wikileaks gave a load of information about Guantanamo Bay to the
Telegraph and the Washington Post, with an embargo, and it was then leaked to
the Guardian and the New York Times, which then published it as a scoop.

You mean heâs in it for the money!!

You can tell heâs a bit strange by looking at him.

If Mr Assange leaks, it appears to me that he has some kind of a medical
problem. So why does he charge others to leak for him? It sounds absurd to me;
he should get his incontinence problem sorted â PDQ. Such people are
malodorous and antisocial â they stand alone in a crowdâ¦