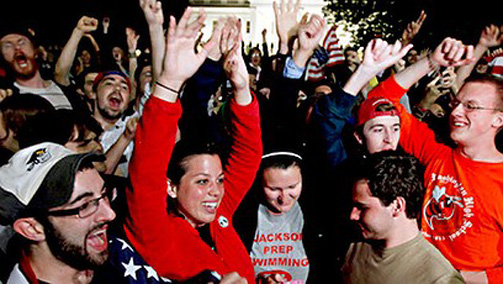 The classic ending to every American movie, the moment when the assembled crowd raises their right fist in a salute and whistles, cheers and stamps their feet yelling ‘well, all riiight’ is being played out in front of the White House as we speak.

We can turn the telly off now and sleep easy in our beds. King bin-Kong has been slain; the credits are rolling; the token woman and the token American Negro returned to the props cupboard, and we remembered to thank the National Tourist Board of Pakistan for their assistance in making this film.

Drink your cocoa up, tomorrow is a school day and you can frolic on the trains and planes of our great country without worrying about backpacks full of nitro-glycerine lying around – didn’t we just sneak into someone else’s country and shoot the main man dead – and triumphantly sneak out again with his body so he won’t get a decent burial?

I mean, if Pakistan forces had crept into Britain without telling the UK government and shot Obama and sneaked out with his body – the war on terror would have been over, wouldn’t it? No one to give orders any more; and all the little Muslims and all the little Christians would have smiled at each other and lived happily ever after.

Keep cheering folks – Part One may have ended when bin-Laden ticked the ‘add location’ box on his Twitter feed, but the sequel is already in the can.  Exploding at a destination near you.

Let’s have a rousing chorus of that all American signature tune – ‘It’s only just begun’.

Also from Twitter – Hey England, we see your wedding and raise you a
funeral

We know Obama was miffed at not getting an invitation to The Wedding, but
it’s no excuse to go round shooting people….

Just like Saddam then, killing him will solve all the problems, won’t
it….?

At least they succeeded in failing to take him alive, this time.

Indeed, the Obambi administration seems to have finally got the hang of
real-politik. No nonsense from Eric Holder (yet) about how OBL should have
been returned to a civil court in New York for prosecution.

A good days work, and a very symbolic blow to Al-Queda, the nutters in
Hamas are displeased which is a very good thing, unfortunately these
groups have many “fellow travellers” embedded in western democracies which
could easily lead to retaliatory events. Luckily they are pretty inept and
usually fail.

Whatever your thoughts about OBL he has successfully radicalised a lot
of muslims who in turn have been protected from censure by idiot
politicians, that genie will not be returned to the bottle. His jihad has
been and will continue to be very successful until western politicians
wake up and govern for the majority of their constituents.

Ms. Raccoon, just thought I’d mention that the gentlelman known as Max
Farquar (and afka “The Grumpy Old Twat”) has had his latest blog taken down:
http://www.maxfarquar.com/. Can’t find any info on the
situation from the usual suspects. It was no more seditious than a lot of
others, although it’s fair to say the language was utterly appalling.

His mummy probably took his computer away.

Good show, old horse. Look forward to hearing anything you can dig
up.

There you go, old goat, word from Max, site is too busy for his host,
he’s trying to resolve it!

I suspect this may be a case of over enthusiastic new wordpress user
rather than anything more suspicious!

I think at best grim satisfaction is called for – high fives and
celebrations seem both premature and immature.

Studying that picture in greater detail, there seem to be a lot of men
with beards. Could be a bad sign…

Not that the chap at the front would notice – he’s clearly eyeing up the
bouncing chest of the young lady before him.

Ah but what’s she looking at??

Just waiting for all the congratulations to flow from Muslim groups. I bet
the MCB are knocking up a statement right now. Or perhaps not.

That o.k. then – we call sleep safely in our beds.
Apparantly what gave
him away was that he didn’t have the internet – apparantly not having an
internet connection is considered suspicious behaviour.

You’ve all got it wrong. To see why you may nip over to Anjem Choudary’s
place.

From Twitter – Elton John to record “Sandals in the Bin”

You owe me a new keyboard!

That is in extremely poor taste, Gildas.

So *this* is where Bingo Bango Bongo now hangs out!

A step in the right direction.

Now if only CallMeDave would grow a spine and deal with the fellow
travelers here, we really could start to sleep more easily.

I don’t think it’s ever right to celebrate a death, but I have a sense of
grim satisfaction today. The man espoused and caused mass murder and by the
most terrible means. He would have tortured and beheaded all who express a
view to the contrary. Of course the battle with Al Queada is not over with the
death of this man, but he got what was coming, and I hope it was a thoroughly
nasty end

On of the most unsettling images following the 9/11 attack was the sight
of women dancing in the streets and ululating in celebration.

I wonder how these scenes in Washington will play in the wider world;
Obama may talk of ‘justice’ and ‘human dignity’ but his words have been
drowned out by a triumphalist version of ‘Ding-dong, the Witch is dead!’

The all-singing, all-dancing finale for ‘US vs Bin Laden – the movie’ may
yet become the opening sequence for Continuity Al-Qaeda’s first recruiting
video.

Dunking him in the briney ala robert Maxwell wasn’t the best idea
either.

“There’ll be no more sobbin’ when bin-Laden’s bob bob bobbin’ along,
along……..”

Strange that. Bin Laden dead and his body face down in water…..

Am I the only person wondering where Barrymore was yesterday?

“One of the most unsettling images following the 9/11 attack was the
sight of women dancing in the streets and ululating in
celebration.”
BBC staff – they always enjoyed it when things went wrong
during Bush’s tenure.

I know there’ll be trouble, but it was a good day’s work.

To be honest, I assumed he’d been dead for years. It’s nice to have closure
on that point.

Retaliation? Is anyone suggesting we should have pardoned him for fear of
retaliation? Bring it on.

“Well All Riiiiight! Yeah! The classic end to every American movie…”

….and cribbed, in the event unwisely, for the occasional Labour party
rally.

So they’ve finally (after how many years?) got one of ‘enemy’.

In the mean time how many of their ‘allies’ did they get?

I bet the British security forces are glad the announcement wasn’t made
before Friday. Their job might have been somewhat harder and more
nerve-wracking.

The Telegraph has been running with a story that the honeymoon was
cancelled at the last minute…….