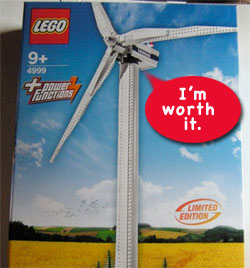 What do you get if you pay the best part of three-quarters of a million pounds to have your own specialised press and public relations department?

If you are a Premier league footballer, probably a rest from the Mother-in-law’s only-too-well informed tongue.

If you are a rate payer in the People’s Undemocratic Republic of Sandwell – then not a lot. They do their best, poor loves, but are constantly undermined by determined bloggers. (Declaration of interest here – yes, me too!).

Back in February, the Sandwell Press Office put out a press release claiming that the giant wind turbine which they were planning to erect in a local beauty spot would provide electricity to 20,000 homes.

They also said that it would be screened by trees – it’s 200’ foot high; I’m reliably informed that in the rain forest with above average warmth you can expect trees to grow to this height in a merely 15 years or so,  however, Sandwell isn’t in the rain forest – yet.

They successfully planted this story in the local newspaper, the Express and Star. Sandwell’s financial Director, Steve Eling was reported as saying “There would be a cost to put it up, but it would produce a very significant level of saving for us.”

He didn’t just pluck this financial prediction off a passing cloud; it was informed by the test run the council had already made. They had erected a windmill in Oldbury and were monitoring its progress.

Enter the determined bloggers. They put in a Freedom of Information request in order to learn how this windmill in Oldbury was progressing and what were the costs involved.

They tracked down the wind turbine involved, and found it had cost the council £5,000. It is expected to repay the cost of installation to its owners in 45 to 125 YEARS. Gasp! This is what you call a long term investment. Still, undaunted, Sandwell had ploughed ahead and installed the Airdolphin. It’s only ratepayer’s money, not as though they were investing for themselves.

Did it perform as well as expected? Between 500kWh and 1400kWh per year according to the manufacturers?

A difficult question to answer, since it emerged via the FOI that the council had actually invested in no less than two of these carbon reducing beasts – and they had only monitored one of them. The one they had put up in the grounds of a primary school. (The better to indoctrinate young minds….)

The £750 cost (you didn’t expect it to be free did you? and they did save the £150 cost of installing one of these….) of monitoring this windmill had produced the startling information that it had produced a stunning 209kWh of electricity in the entire year. Or to put it another way, it would take 40 odd years merely to recoup the cost of someone monitoring it – never mind around 250 years to recoup the cost of installing it!

So, to answer my original question, ‘what do you get when you invest £679,200 in four press officers and a support team’?

You get enough hot air planted in your local rag to power a medium sized wind turbine for around 16.2 years, not including the cost of batteries to keep the sails turning……

Back in 2009, Sandwell spent £16,000 on handheld Blackberries for 64 of their councillors – anyone monitoring the amount of hot air being generated into those?

I’m very touched that Sandwell Council has been so kind to award free
Blackberries to its councillors at taxpayers’ expense. However, I would be
more inclined to award them with Raspberries..

SteveH – what’s your point? That because local papers have cut back on
staff they should be exempt from the usual principles of news-gathering?

Sandwell Council! Meh!
They’ve got plenty of form. As well as tHE pUBLIC
(Google it and weep) costing £70 million so far, they just love spending our
money, and then hiding the evidence.

Fancy a narrow boat anyone? Seems they lost interest in this one too.
http://www.prideofsandwell.org.uk/

“The one they had put up in the grounds of a primary school. (The better to
indoctrinate young minds….)”
Bad idea:
http://grumpyoldtwat.blogspot.com/search?q=wind+turbine

Most pilots will have experienced the effects of turbulence created by air
flowing around obstacles – which is why any sane person with engineering
knowledge would never locate a wind turbine anywhere
near large trees….

Sorry, sorry. I’ll get me coat.

I admit it Eleanor, I like wind turbines too. They look kinda neat. I
have defended them in local meetings of nimbys.

But only the big land-based ones can go more than half-way to paying for
themselves. (Building them at sea doubles the cost, trebles the maintenance,
and only marginally increases the output.)

The little ones are a pathetic joke.

Don’t apologise, you’re stating a point of view.
I like other
renewables like hydroelectric and tidal barrages, although the capital
investment to build them is enormous. I can’t see solar panels ever being
viable in the British climate, but one engineering scheme that fascinates
is the Israeli solar crucible. With a suitably shaped site for the
reflectors and computer control to track the sun they refine titanium ore
using the free energy.

It is very easy to be seduced by the gee-whiz factor involved in most
renewable energy plans, it is only when some sober financial analysis is
applied to the plan that reality reveals itself.

If you are willing to pay 3 or 4 times the existing rate for
electricity and then only receive it at intermittent intervals then feel
free to indulge yourself.

The “free energy” that is frequently referenced is all-well-and-good,
the problem being that to capture the “free energy” requires very
expensive infrastructure (no exceptions) that is usually in some remote
location that requires yet more very expensive infrastructure to connect
to a grid. This is true of even Nuclear energy which is the most viable
and safest option available but at least provides reasonably affordable
and reliable energy.

I like the remaining models of seventeenth and eighteenth century
timber-framed wind-powered machines -those accurately referred to as
windmills though some of them were pumps not mills. Fact is they fell
into disuse precisely because the “free energy” was erratic and
uneconomical and like their modern descendants were difficult to
maintain and killed quite a few of their operators.

Indeed, there is a reason why we stopped using them to grind
corn…….

Yes Anna, and to drain the fens.

“…Blackberries for 64 of their councillors…”? How many freeloaders suckle
at the Council Tax teat? What on earth do these 64, not even the whole team,
do? (These are just the drones, not the workers – workers do not have
Blackberries given to them.)
It’s no wonder the Council Tax is so
extortionate, it has to support many parasites.

Pickles can direct the cull these drones easily – keep the frontline
workers, sack the Blackberristas. Simples!

It strikes me as child abuse, telling the kiddy-winks that all the furry
animals will drown unless every invented tenet of the Green religion is
fervently adopted and pursued.
Presumably if a Sandwell infant says “My dad
reckons that Global Warming is bollocks, the numbers don’t add-up and only
half baked looney-tunes lefties are suckered-in”. Then the errant child is
either soundly thrashed, or given a penance for heresy, or taken into care by
social services.

Indeed, AGW denial should be the one case where corporal punishment is
both acceptable and appropriate

How about denial of the benefits of going Nuclear?

” …. (council) Bosses say it would be screened by dense foliage and high
trees”

That seems a really great way to improve air-flow for a wind turbine.
Facepalm.

Spending other people’s money is always easy – a pleasure, even. Spending
it on your own pet prejudices is positively orgasmic.

” ‘Noise’ from the wind turbine wouldn’t be a problem since it would be
drowned out by the noise from the M5 …..”

On the contrary, only if the former’s sound wave has the same
amplitude but with inverted phase to the latter’s sound will they
mutually cancel each other. Bird-shredders & traffic noise are totally
different; occur at different times; and, have different relative
loudnesses.

Except in an anti-phase situation, two noises added together increase the
nuisance.

” It’s only ratepayer’s money, not as though they were investing for
themselves.”

Even the dreaded Laylandii would be hard-pressed to screen that!

All the toy ones are an utter waste of money and resources. They are
espoused only by gullible fools and lying scoundrels.

I was about to say that these people are crackers, but they aren’t crackers
really – they just find ways to spend tax payers money on them and their
own.

I think you should direct just as much of your anger at the local press for
not challenging the press release and not submitting FoI requests.

Have you read local papers these days? Those were cut to the bone years
ago, if they survived that is, and if our local one is anything to go by,
they are now staffed by teenage work experience. The only investigative
journalism I expect our local rag to perform would be the cheapest place to
buy fags…

If they really were staffed by teenage work experience at least you’d
expect their websites to be a bit better run!