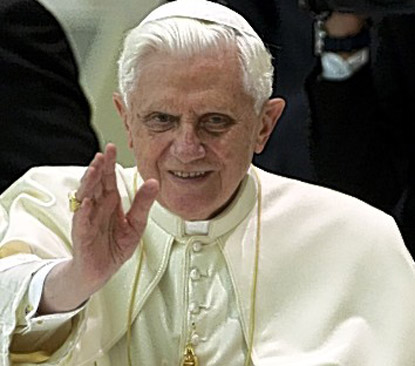 It appears that one more miracle is all that is needed for the late and recently disinterred Pope John Paul to be declared a Saint.

I am tempting providence here in terms of moderation, but I thought you might care to speculate on the nature of the miracle that you would like to see occur….

Personally I would vote for the Treaty of Rome disappearing in a puff of any colour smoke they care to conjure up – if that happened I’d be genuflecting in St Peter’s Square with the best of them.

What would be your wish, what would you like to see happen?

Clegg and Cameron as a song and dance act on Britain’s Got Talent (in the
ironic also rans section). To be replaced with politicians who actually want
to improve the lives of those who pay them salaries.

Bring Nigel Pargetter back to life .

An amputee growing a new limb would be impressive. And if miracles are
possible, why not?

Liverpool to win The Premiership? Rangers to win the European Cup?

Damn! Someone should have prayed for Bin Laden dead…

Robert Mugabe next please, or would that upset his friend the Pope?

I would settle for instantly finding a handkerchief whenever I have to have
a mighty sneeze. ( pollen season here).

Pray to St Piriton (also works for rashes that St Amoxil can’t help
with). If no luck, start a forest fire.

How about exposing all the false memories of those who claim Catholic
clergy sexually abused them for what they are, because it is surely obvious to
anyone except a (Rangers supporting Orangeman) bigot that no Catholic
clergyman would ever do anything like that, now, would he?

Being instrumental in the fall of communism in Poland and the subsequent
collapse of the Iron Curtain, should just about clinch it.

All those who deserve realy bad luck to suddenly find themselves in the
deepest….

Now that you have been moved up the beatific hierarchy and are a few
flights of angels nearer to God, can you please perform a miraculous
transformation on our British women.

Please can you ask God to use some of that water to wine magic of his and
change them from the bunch of slapper, Britney/Posh Beckham wannabee, X-factor
loving, thong exposing, lager swilling, paralytic gutter denizens into
something like the Middleton girls.

Ta ever so much.

P.S. The above does not apply to any female occupants of these envrions,
you are all (except Fabian the Fabulous) charming young ladies whose presence
is much appreciated.

P.P.S. Please Santa, can you make one of these lovely transformed ladies
short sighted enough to fancy me.

As a Catholic, I would like to be rid of this Pope and be appointed in his
stead. There would be a number of reforms, including a proper Inquisition like
purge of child abusers and those who protect them. No names, no pack drill.
And I would open a night club in the Vatican. And I would establish appoint
Sister Eva a head of a new order, the Sisters of Earthly Delights.
Ah
well…. Let us pray!

Anne Widdecombe and an Immmaculate Conception?

Or, more seriously but in a similar vein, a voice from On High saying that
the Almighty is quite happy for Roman Catholics to use birth control ; think
of the problems that one would sort out!

Oops – should have added ‘any form of’ – ‘natural methods being
sanctioned by Vatican 2.

I think Anne Widdecombe IS a ‘natural method of contraception’…

That Nigerian 409er could actually deposit the £million into my bank
account as he’d promised.

“Tempting providence in terms of…etc” But we’re paragons of self-restraint,
tee hee.
Right, my demands of St Kowalski are modest-

1. Tilt the Earth on it’s axis to create permanent spring or autumn (Big
G’s choice).
2. I want personal super-overrides on anything that’s
important to me i.e. everything.
3. Free money for everyone. (clause 2 lets
me remove it from unworthy scumbags).
4. Get to sh*g Pippa (the only
convincing argument for the televisation of recent events).
5. Cats and
dogs will get along (negotiable, always have a throwaway clause when
bargaining).

The Scottish Labour Clique might win the Holyrood elections on the 5th.

Mmmmm, not really a miracle though because of the Postal Vote.

Why do they have to make him beautiful before he can become a
saint?
Well he was a bit ugly I suppose but not as bad as the new
bloke!

Maybe he could make Gordon Brown into a human being or Ed Milliband into a
muppet or is he one already?

I watched some of this on the TV, and all the gold and the ceremony and the
solemn pomp and the chanting and the conspicuous wealth, and I wondered what
that rather nice chap back in Palestine would have thought of it all.

My ‘miracle’ would be for the Catholic Church to say “look, chaps, I think
we’ve strayed a bit off-message over the last 2000 years – let’s forget the
massive hierarchy, sell all the gaudy stuff, give the proceeds to the poor and
try doing meek for a while”.

I was going to say the same thing. The Catholic Church does a lot of good
work but if every cardinal/priest etc in the world agreed to sell just one
ring each the proceeds would do more than they do (perhaps I shouldn’t
mention rings). I imagine if they did sell everything: property, jewelry,
fine robes, gold, art etc…they could more or less wipe out world poverty. As
you say, the young, hairy rather rebellious cult leader may look more kindly
on them.

Some hope…reminds me of the “wish” joke and the bridge across the
Atlantic.

I’d settle for all Pontiffs from here on in saying ‘No, don’t be silly, no,
I won’t hear of it, you put your wallet away, right now’ whenever they
announce they are going to impose themselves on one set of poor old sods or
another.

Just once please, just the once

How about Arsenal or Man City to win the league? Not quite impossible but
certainly up there in difficulty level. Not too earth-shattering either.