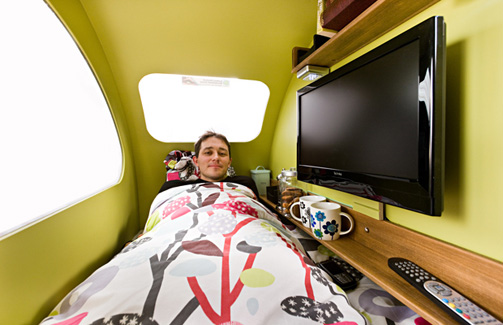 I have always loathed caravans. Could anything foul up the traffic flow more efficiently than a trundling three piece suite and double bed on wheels, with integral microwave and satellite tv aerial; a mobile council house heading at a snail’s pace for the nearest coast?

Oh, but yes it could. An even slower version. Surprisingly, I can see possibilities in this new incarnation; a little research has led me down some pleasant diversions this fine morning.

I have solved the ‘homeless’ problem, arrived at a ‘Free State’ for Libertarians, and am all set to drive the anti-smoking lobby wild, via the ‘Green lobby’ – who could ask for more?

First of all you need to come within the legal definition of disabled. It is a 4 part test, with some surprising components. You will pass the first part with flying colours if you are now addicted to nicotine patches, having not been addicted to nicotine before. You were only an occasional smoker? Fell for the smooth words of your local ‘smoking cessation officer’, now big Pharma has you in its grip!

“addiction to alcohol, nicotine or any other substance, unless it originally results from the administration of medically-prescribed drugs or other medical treatment.”

Onto part 2: Do you have difficulty with your memory or ability to learn, concentrate or understand? Failed to fill in your census form ‘cause you couldn’t understand why you should?  Tick.

Part 4: Is the adverse effect long term? – “If a substantial adverse effect ceases but is likely to recur and the likelihood of recurrence extends beyond a 12 month period then it is classed as long-term.” Tick.

Now you are legally defined as ‘disabled’, a whole new world opens up for you. I have a vehicle for you that requires no driving licence, incurs no taxation, doesn’t need insurance, can park anywhere it damn well pleases, and is heavily endorsed as being ‘carbon neutral’ by the Green lobby.

Best of all it comes complete with a home that requires no planning permission, incurs no council rates, escapes the census requirements, can be placed anywhere with a view that pleases you – and has picture windows through which the anti-smoking lobby can view you chain smoking.

First prize of 200 Player’s No 6 to the first person who parks one right outside Deborah Orr’s house. 2nd prize of 200 gm of Golden Virginia to anyone spotted lying back and enjoying the view of the Royal Wedding from one parked outside Westminster Abbey, and a special bonus prize to one managing to break down in Regent’s Street just before the wedding procession glides into view. That Plasma screen facing the windows has advertising possibilities too…..

OK, it only does 12 miles an hour – how fast did you think you were going to be able to drive through London these days? Concentrate on the possibilities. Think positive!

Just spotted – this topical story in the Mail.

Might I suggest also the Queen album ‘Shear Heart Attack’, Englebert
Humperdinck with ‘Fleece release me’, ‘Bleat Surrender’ by The
Jam and, of course, the Beach Boys with ‘Baa-baa Ann’?

The Lord is my Shepherd
Sheeps that pass in the night…

Once again, I’m completely in awe
Of the verbally dextrous Glor-
ia
Smudd, she’s a wonder;
Fifteen minutes to ponder
Then she makes us all
roll on the floor.

:blush: I was going to recommend a play-list but I’ve gone all pink and
giggly now! ….

Choose your location with care – Uttoxeter would be a good place to
start, or maybe Ramsbottom.

That’s why I didn’t suggest anything by Wham!

The real reason has just emerged as to why so many rams were committing
suicide.

The farmers had clubbed together and installed a music system to calm
their flocks.

How about swapping the scooter for a quad-bike, and having an off-road
version to make the best of London’s many parks?

With my QT I travel in style,
With a smug ‘Look-how-green-I-am!’
smile,
At the pace of a snail,
Never mind that my tail
Is a traffic
jam over a mile.

When at last I might pull off the road
With my scooter and QT
abode
I’ll curse my lumbago
In this Minnibago
For once in I can
only stay stowed.

Having met with a nubile young beauty
He escorted her back to his
QT;
They got horribly stuck
So it’s jolly good luck
That the Fire
Brigade were on duty.

There’s a fortune to be made by the first person to bring the
Y-shaped Minnibago to market….

Young men! Choose a nymph, not a lardo*
For congugal bliss in this
vardo (look it up)
For lardos are wide
And to get one inside
May
prove too terribly hard – oh!

* and I should know

‘Oi can park up my QT to sleep
On a hillside all craggy and
steep;
B’ain’t much room to spare
For the Missus in there
But
’tis powerful handy for sheep.’

Sorry, Anna, we do seem to be lowering the tone somwhat.

If it’s off to the mountains ye be,
Don’t go in the titchy
QT;
For seducing a bleater
You want a six-seater
(But you
didn’t hear that from me).

Ms Smudd, have you tried Cornish Tea yet. Yes, there is a tea plantation in
Cornwall, and I believe it is now in production – cheers.

Caravan owners think they own the road, they drive like Mr Towed.

I thought it might have been too obscure a reference, but we’re
bright sparks on ‘ere…
Cue tee could be for UKIP voters (all par for
the course).

How about a version with bunk beds (leaving out the flatscreen should make
enough room)?

When is the motorhome version coming out? Will it have solar panels and a
windmill on top?

So that when you’re driving along the windmill will be whirring away
providing power to allow you to drive along?

There’s one born every minute

Could I perhaps interest you in a new type of mobile phone charger. Its
a roof rack for your car with a fan mounted on it, as you drive the fan
whizzes round and charges your phone, and guess what? yes! … its
completely free …. just send £5,000 to me and I’ll send you one by return,
you can then charge your mobile phone for the rest of your life for
FREE!!!! …. heehee

But of course. The faster you drive, the more the windmill will rotate,
so the more power it’ll generate. (Well, you could fob the greenies off
with that anyway – no point letting physics spoil a good theory, is
there?)

Sssshhhhhh you 2, we have a potential commercial success here … well,
commercially for us that is.

I pronounce the QT* as Cute so it’s a cute van. Well it is diddy and small
and cute.

* An alternative pronounciation is Cue teee.

Smudd settles down for a good read. Cue tea.

Nothing but Yorkshire, of course! The fact that I look like a chimp
doesn’t influence what I drop into my teapot!

Consider myself chalked off and leaves to consider my future.

Quite right. That comment certainly lacked your usual char-m.

A home that requires no planning permission, incurs no council rates,
escapes the census requirements, can be placed anywhere with a view that
pleases you – and has picture windows……….

This is old hat.

Our chums, the ‘travellers’ , discovered this when Adam was a lad.

Ah, yes – but they’re not usually very carbon-neutral, are they? Even the
horse-drawn ones produce, erm, biodegradeable methane-rich matter.

Great idea. I’m just trying to figure out where to keep the chickens.

part 2: Do you have difficulty with your memory or ability to learn,
concentrate or understand?

Researchers carried out tests on 150 volunteers, all weighing over 21
stone, and compared them with results from healthy people.
Professor John
Gunstad, of Kent State University, Ohio, said the research showed obesity can
damage the brain, ‘especially the parts most important for paying attention
and learning new things’.
[Daily Mail 15th April]

I wouldn’t say it wasn’t damaged, just has different priorities. The
brain of someone over 21 stone is likely to be concentrating on the next
meal rather than a boring researcher (unless the researcher could be eaten).
Learning new things is not important when you can try out new foods.

Obvious fattism. Equating >21 stone with not healthy. They are just
differently-shaped.

View, that struck me too – I wonder whether the term featured in the
original press release or whether it is knee-jerk mail-speak.

Nope! I got nothin’!

It wouldn’t be hit by the London Congestion Charge – it’s electrically
propelled, pollution-free and would go down a storm with the Greenies… yes, oh
yes!

Why set up a free state? Libertarians could just glide round endlessly in
one of these, roaming the world, preaching forgiveness or something! (and
gumming up the entire works in the process!)

Is it only Council Houses’s that have three piece suites, integral
microwaves and satellite aerials then?

Nope, caravans have them as well.

I want one now!