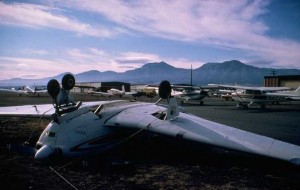 It criminalises the activity of both giving and receiving a bribe, as well as bribing a foreign public official. The offence is widely drawn and catches a bribe paid by another person who performs services on behalf of a UK business, whether the wrongdoing was committed in a foreign jurisdiction or in the UK.

Should Ryanair, for instance, give money to an official in charge of the Airport at Alicante in order to ensure that they continued to be able to bring their business to Alicante and profit thereby – that would be bribery and they would be prosecuted.

Did I just mention Alicante and Ryanair? So I did.

The airport authorities at Alicante want all flights to use air bridges rather than steps, to board planes, for safety reasons.

It is not just the estimated 2 million cost of providing these steps that has upset Ryanair – it is the fact that they can only be used at the front end of the plane. Now Ryanair like to unload passengers from front and rear doors – get ‘em off quicker, reload quicker, make more money…..

Ryanair deliver 4 million passengers a year to Alicante, many of them people who bought homes in the region simply because Ryanair flew there. It is a powerful economic weapon – one which Ryanair is prepared to wield if the authorities at Alicante don’t forget about this safety legislation. They have already cancelled half their flights to the town as a warning shot.

I am not sure which is the morally more despicable action?

I wonder why the Business Secretary, whilst going to the trouble of ‘cleaning up’ British Business, only addressed the issue of one way in which you can influence businessmen and foreign officials?

So you don’t pay bribes, you pay an agent whose job it is to ‘negotiate’
the deal for you.

Is that like companies paying bribes to politicians via an intermediary
such as a lobbyist?

Anna, Am I reading you correctly? You are suggesting that a private
business is doing something morally wrong by refusing to kowtow to excessive
state legislation that drives up costs?

NO, I am comparing it to a private business that makes the commercial
decision to oil the wheels of a business deal that is in its shareholders
interests by paying money to someone who can help the deal along – and
wondering why one is considered morally wrong and yet not the other.

Oh I see. You are coming at it from the other angle. Got you now, good
point.

Another thought. What is the difference between a bribe, intended to
encourage someone to do something, a payment to a political lobbyist, to make
them encourage politicians to do something, and a bonus designed to encourage
a worker to work to the best of their ability?

And what is ‘foreign aid’ if not a sort of bribery.
In fact bribery is a
weak knee’d replacement for the good old gunboat.
If this idea spreads to
home what will happen to courtship in general and diamond rings in
particular.

I always use budget airlines. I’m not worried about falling down the steps.
I’d like more leg-room, but you pays your money and takes your choice.

Are you suggesting that it should be illegal for an airline to stop doing
business with an airport which puts the prices up? Where does that lead?

Airports, to my mind, take advantage of a near-monopoly situation. I
applaud the budget airlines who play hardball with them.

Nobody ever tries to bribe me.

It’ll cost more than that!
Waterboarding is costly!
Ha!
What
goes around, Baby…

It is a curious piece of legislation. In a sense, the last hurrah of the
Blair years. In law there is the principle known of “territoriality” which
simply means that one’s power to legislate as to whether something is or is
not a crime is restricted to what takes place in your own country, the UK.
That’s was not good enough for Tony! That would be morally wrong, wouldn’t it,
Brits out there wheeling and dealing and being…slightly untruthful and bent
(sound familiar?). So in a fit of moral supremacy it was decided to legislate
that wherever the “bribery2 took place, the British citizen would be liable.
How noble. Except, er, for a couple of things. First, that’s how business is
done in maybe 60% of the globe. And second, specifically, it’s how it’s done
in Saudi, where BEA or whoever, ALLEGEDLY spent quite a few million on a
cultivating Saudi Princes, in order to win a billion pound defence contract.
So allegedly that Tony had to call of the investigation in the face of Saudi
threats that if he didn’t, they would cut us out of info on extremism and
generally cause us grief.
Twat.
You couldn’t make it up. I’d like to see
Phony Tony have to make a living negotiating a multi million pound in Nigeria,
Saudi or China.
I suspect Cherie would have to work a bit harder.
Gildas
the Grumpy

He’s had a hard day, bless

I have worked on a Middle East project where my customer has paid an
“enabling fee” to win the business. I noted that that is all it was.

It did not allow any failure to meet contractual requirements and in fact
the recipients of the fee were extremely annoyed when there were problems
with the project. as far as they were concerned my customer had let them
down.

In other countries this would have been a non refundable bid bond or
something similar. The difference? Public sector v privat sector bribe.

Another point entirely isn’t a tip a bribe?

If this falls as illegal under the new laws then we have a serious
problem.
Whenever I buy an item or service I look at the terms. If the
terms, conditions or price is bad I won’t purchase. The same applies to
commercial arrangements. If a refusal to pay an increased price, or a refusal
to conform to new conditions becomes an illegal act all freedom of choice and
commercial competition will vanish.

Is paying visa application fees to another country to process paperwork to
allow one to permanently leave the UK considered bribery? If so, we’re all
stuck here

Forget about small fry like RyanAir this legislation could put Airbus
Industries out of business, can you say-goodbye BAE.

The camoron has already destroyed industries access to the middle east with
his meddling how many more balls-and-chains does he need to attach to the
“economy”.

Greece down, Ireland down, Portugal down, Italy and Spain teetering and
hoping like hell that the refugees from Libya and Tunisia don’t get ashore. So
camoron dreams up a new way to destroy the productive sector. Last English man
out turn out the lights.

Dont know if it was Ryanair, but a budget airline wanted to fly into
Angouleme (near here in France – LOADS of second homes) but the Angouleme
council wanted such ridiculous amounts of money, that the budget airline told
them to get stuffed.
End of cheap flights from the nearest city to me.

This whole sorry tale rather reminds me of a neighbour a Mr. Coggshall, who
tried to blackmail the local cooperative store to bend to his will when they
put up the price of evaporated milk by thrupence… Mr. Coggshall rather loftily
told them that he would from that time forward buy his evaporated milk from
the Spar on Water Street.
You can imagine the unrest in the village… some
taking Mr. Coggshall’s side, and some the Cooperative store. Mrs Coggshall was
lucky not to loose an eye.
Where will it all end?

Business should be done on agreed terms, the airport wishes to alter the
terms of that agreement. Ryanair do not agree with the change. Who is
blackmailing who?

The airport are bullying Ryanair and they are fighting their corner. As far
as I see it this is the airport’s fight not the airlines.

What about the morally despicable action of demanding 2 million for
Safeteee.

I cannot remember seeing reports of hoards of pedestrian deaths or shuttle
bus disasters at airports. There have however been tragedies with air
bridges.

I like getting on/off the plane a bit quicker when they have 2 doors
open.

As to commercial advantage nearly all the planes I’ve been on have both
doors so surely that’s the airlines choice.

I am surprised at the whole post including the pic, seems a tad spiteful
and beneath your normally superb content.

Having teased a bit by implying that the editorial line could be fallible
(not the word used…) on a prev topic, time to creep a bit by offering the
view that the pic is a fairly typical sight at any airport.
When a light
aircraft crashes it’s towed out of the way and can stay there for a while
until the insurance pays out.
The other defence of the post is that it’s
putting a view and inviting challenge or agreement. After reading about the
regional authorities in that area I also side with Ryanair (no links).

You live by the sword or die by it, maybe sup with the devil too.
When
the authorities in Fuerteventura ‘upset’ Ryanair, they simply withdrew all the
flights, it cost the island a fortune in lost tourism. Ryanair were ‘invited’
back the next year…..read into that what you will!

Unfortunately blackmail as you describe it falls into the “More honour’d in
the breach than the observance” category – almost impossible to legislate
against.
I quite agree that both are equally heinous – but the lawyers and
accountants will find a way to drive a coach and horses through any
legislation.

Isn’t that the Valencia area that passed the infamous ‘land grab’ law? TBH
it looks like a bad part of the world to live in and do business. They make
Sandwell look good!