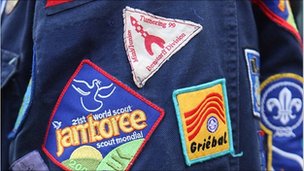 This years most desirable ‘prowess badge’ to have on your scouts uniform, is one for teaching the younger kids how to have sex.

Quoting Health Protection Agency figures, they said the UK had the highest rate of sexually transmitted infections (STIs) and teenage pregnancies in Europe.

These “worrying statistics” were most likely to be reversed if young people were given clear information about safe sex, it said.

They don’t learn about this sort of thing at school (???) so senior scouts are preparing to take the young lads in hand, and….I canna go on.

Matt Mills, a Scout Leader from Essex, who was involved in the development of the new material, said it covered “sexuality, STIs and abstinence”.

Adventurer and TV personality Bear Grylls, who holds the position of Chief Scout, said the programme was about enabling young people to “make smart decisions” about their relationships.

“We want to help young people become confident, clued up and aware,” he said.

The worst blow for the scouts since the guides’ one-way ‘eeekwalitee’
invasion and the introduction of the ‘Sewing Hiking Knickers’ badge.

2Mac – do tell – who do you consider fit and proper to go camping with
young boys?
Maybe the kind of males that lurks around half naked young men
( skins)

I never went to Scouts but I played football near to the Scout meeting
hall. I used to always think it suspicious that they always played games where
one team was T-shirt(Shirts) on and one team T-shirt off (Skins)

Bar NONE! Every single one of the Scout masters looked like a suspected
kiddie fiddler.

There is something very wrong about fat 50 year old men in shorts with
badges on their jumper putting up tents to go camping with young boys.

Is there just the one badge? That seems a bit broad. How about a badge for
cunnalinguss another for the Reverse Dutch Steamboat. You could have loads of
badges, and it would give those normally barred from working with kids a
legitimate new past time as scout masters and mistresses.

As I said yesterday

Dib Dib, Dob Dob
Put The Johnny
On Your Knob

From what I recall of my school days I got my first official Sex Ed lesson
in my last year of junior school and the subject probably came up yearly in
secondary school.

As I can’t imagine that the frequency of the lessons has reduced, nor the
starting age increased in the last 20+ years it would seem to me that far from
putting children off the act all we are doing is ensuring they know all the
ins and outs (so to speak) and are more then happy to put those lessons into
practice.

If by ‘We’ you mean the ‘The State’ it is yet another case of the wheel
is turning but the hamster is dead. The private sector has come along and
provided for the need better than the state ever could dream of.

These days all kids have computers; all computers have the internet, the
internet…… thus they know it all in vivid detail already, HD quite often
too.

Standards! Use the traditional methods of instruction “Wank and your
eyeballs drop out”.
“Screw a tart and the medics use a wire brush and
Dettol on the todger”. We might even get the empire back.

Baden-Powell’s book was called ‘Scouting For Boys’, wasn’t it? Says it
all.

Of course they do. They provide contraception and abortions and as we know,
the current methods of “education” are making things much worse, so they will
likely get even more customers.

I call that highly cynical and exploitative. That nobody in the Scout
Movement can see this is unacceptable.

Is *everyone* in a position of influence totally ignorant of the underlying
agenda, and does *nobody* in power ever consult those people who are going to
be affected by their brilliant ideas?

Well, sex education in secondary and primary schools was meant to help with
STIs/teenage pregnancy. As it hasn’t worked the answer is obvious: more of the
same.

Are they holding joint sessions with the Girl Guides?

I’m sure they’re not allowed to smoke joints.

Aren’t scout-masters supposed to have been doing this since Baden-Powell’s
time? Sorry.

I think they got a different sort of label to stick on their CRB
check….

Blow that for a game of soldiers..