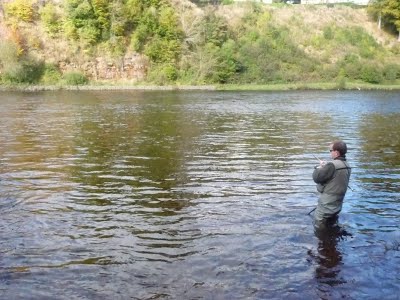 It is just four o’clock. The sun is setting, and glittering red on the water in front of me. I am standing rather uncomfortably on the bank of the River Tweed, to be precise just down from a stretch called “the “Willows” and above “the Birkie Pool”. I am uncomfortable because the water is too deep and dangerous for wading here and the bank is steep and it is a little difficult to find my footing. My wading boots, which are not of the best quality, are giving my feet a sort of burning sensation as I struggle to maintain a safe stance like an incompetent mountain goat. My line has dropped out a fair way and as the heavy fly sinks it begins to swing round in an arc towards my bank below me, taken by the strong current. Then this stops and a different sensation begins. Something is drawing the line steadily away. I release the reserve of line which is held trapped by my left forefinger. The sensation is very different from when line catches on an object like a leaf or a floating branch. Instantly I can sense purpose and life. Equally instantly my heart goes into overdrive. I settle the grip of the rod under my right forearm and sweep it back and up; not a snatch, a firm sweep. There is a thud and the rod, 15 feet of carbon fibre, arches over. There is a pause. One, two, three. Then all hell breaks loose…

It is early November. The leaden sky is full of the promise of rain and the trees are swirling a little in the restless breeze. It is not cold, but the weather is fickle, and this can change. It is time for the annual pilgrimage in pursuit of salmon. For the past few years at this time of year I have made these trips north to fish the mighty Tweed.

Strangely enough I do not really enjoy it very much. It came about because I used to be a fisherman in my youth. My friend Wingnut is an expert salmon fisher and I expressed an interest in learning the art. He arranged for me to join in the party which he organises at this time of year. Since then I have felt the obligation to agree to his annual offer. He goes to such trouble in booking and organising the trip that I feel it would be rude to say thanks, but no thanks this year.

Wingnut is so named because of his vast ears. These appendages stick out giving him a quite distinctive appearance. He is a gruff, tall, hard drinking Yorkshire country man. If it has wings he’ll shoot it and if it has fins he’ll catch it. He is also a very astute solicitor. Wingnut’s chief partner in crime is Mr Ed, so named because his large and distinctive teeth give him the appearance of a friendly and intelligent talking horse. He is always urbane and totally charming.

One of the reasons I secretly do not enjoy these trips is because both Wingnut and Mr Ed are so expert in the art, and I am so inadequate. On this river at this time of year conditions dictate a long, fifteen foot rod and a type of cast called a Spey cast are used. This is a complicated and difficult type of cast which involves never letting the fly go behind your head. There are two reasons for this. First, you usually can’t anyway because there are trees and bushes behind you. Secondly because it is generally regarded as a bad idea to risk an ounce or so of brass tube fly with treble hooks (for these are often used) flying into the back of your head or your ear at something approaching the speed of a musket ball. For those who might like a brief and rather stirring introduction into the art in the hands of a master, the link is here.

Both Wingnut and Mr Ed are experts in the art of Spey casting which involves great timing and technique, although they fish with distinctly different attitudes. Wingnut is all about efficiency. He fishes with an intense, mechanical, ruthless style like a Yorkshire robot. He doesn’t care how he catches – the result is all important. Mr Ed, on the other hand, fishes elegantly. He likes the art of casting for its own sake. He is like a footballer who only wants to score a beautiful goal.

My own efforts in this department are, however, poor. This is a problem. Casting a long way matters a lot because there is an element of pure mathematics about salmon fishing like this. Simply put, when the fish lie deep in the heavy autumn current the fly needs to be cast a long way to have a chance to get down to the fish and be properly presented before it is simply swept round into the bank. And the more of the river the fly covers the higher the chance that it will cross the nose of a salmon.

I do not catch many fish, although last year I landed a fish fresh run from the sea. A silver fish about six pounds in weight. Most salmon are not like this. They often linger in the river for months. Their fresh silver appearance then changes and they turn a sort of reddish brown. Fish like this are referred to as “tartan fish” or “red fish”.

We fish for three days, Thursday through Saturday. The beat is on the Upper Tweed near Peebles. It is about a mile long and we have most of it entirely to ourselves. At the beginning of the day we each select a particular stretch known to hold fish (called a “pool”) and fish it through. We rotate pools during the day.

On the Wednesday I head up to Scotland in my somewhat battered Mondeo Estate. It is a four hour drive, up to the M6 through the Lakes to Carlisle and then along winding “A” roads into the heart of the Scottish borders. I love this time of year with all its grey gloom, autumn reds and promise of Christmas, but although we are not due to convene at our hotel until seven o‘clock I want to be there by dusk. A couple of years ago I drove this road in the dark and fog. Unexpected bends and oncoming traffic in the fog were horrid, and I have never been so terrified driving in my life. So I beetle up the motorway starting at mid day, accompanied by a book on CD; The Girl Who Played with Fire by Steig Larsson. Very fashionable and suitably gloomy to match the weather. I also have a vast banquet of chicken sandwiches, little pork pies, crisps and a flask of coffee. A feast on wheels.

I duly arrive at the small and frankly rather dreary borders village at just after four, full of sandwiches and also concerned about the possible fate of Mr Larsson’s heroine. But the hotel is nice. I am greeted warmly by the hotelier who is called David, but is known colloquially as “Doctor Carpets”. This is because he had a small carpet fitting business as a sideline, and his initials were painted on the side of the van – “D.R. Carpets”.

Thus, I am happily ensconced in the bar by the fireside, fortified by a large red, when Wingnut and Mr Ed arrive in a flurry of Range Rover and noise at 5.00 pm. Range Rovers seem to be obligatory round here with the salmon set, and my battered Mondeo Estate looks a little out of place. Never mind.

After Wingnut and Mr Ed have sorted out their rooms they join me. I am now wearing the fez which I have brought for reasons I cannot now remember. Wingnut observes dryly that in a room full of eccentrics I would stand out as eccentric. I solemnly concur, and order another red.

It seems like a lot of effort with little hope of supper. I’ll open a tin,
or go to Waitrose fish counter…

I think you have a fair point there Julia! I have often though the same
myself on my less successful days, which are the majority…

A man went into a pub wearing a fez, true story.

He said, I used to be indecisive but now I am not quite sure.

And for those who do not know what the heck I am talking about, see

The fez bit has us all intrigued Gildas.

Comic genius Cascadian, thank you. I can’t remember any specific reason
why I thought the fez was a good idea. It just seemed a good idea at the
time. It is thus a metaphor the many cock ups of my life!

Thanks all. Just a bit of diary writing for fun
As Randy says part II is
on the way I when I can get Randy to GET OUT OF THE PUB AND PROOF IT,
RANDY!
Point of detail, the second photo is the bank I was standing on – I
was actually just a little bit below where the photo was taken.
Like Randy,
I commend the link just to see how dramatic and skillful this type of fishing
can be.
Gildas the Monk

The competition’s getting tough…
Don’t be koi or newtral. Plaice your
bets for more stories of monkfish, tales of herring do, mussel-cramp and cod
pieces. Prepare to be (tad)pole-axed but never get crabby.

Bravo!
Part II is done, just wait for it!!
By the way, I really do
commend the long and the short but surprisingly dramatic video by Scott
MacKenzie. In the hands of a master, Spey casting is a dramatic and
beautiful art.

Oh happy dace! I’m breaming with pleasure after reading this brill piece.
I won’t perch on the fence (virtually impossible anyway for a broad-breamed
old trout like me) and I’ll instead carp on about how warmed my heart’s
cockles have been made by this soleful essay. On a scale of 1-10, I am a
mere shrimp compared to Gill-das and his river-bank stories, although I can
occasionally mussel together a few lines of prose once I’ve had time to
mullet over, although I am likely to skate over the main issues, but shad’s
another dory. I’m clamming up now, so ….

Gildas says he poured his heart into that post, and now he is upset. I
am very protective of my SPECIAL FRIEND. You are dead.
In love and
light
Sister Eva
x

Ms Sis. E. L.: I fancy that you spring, armed, to the defence of a
man not injured! Nothing I have said cod be construed as even nearly
app-roaching a slight towards the Good Gilldas; I think, if you read my
reply again, that you will find I am praising the monk’s skilled prose
and am merely attempting to make said monk chuckle with a bit of
punmanship in response.

I agree with Lilith. Forget the salmon, I am already well and truly hooked,
(though I know not by Spey cast or any other). Gently told tales like this
(about river fish) are, essentially, spawnography…so, more, please!

You can’t just stop there !