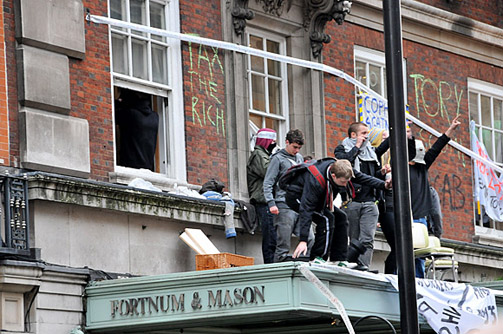 UKUncut are keen to portray themselves as peaceful protesters. They reiterate that their objection is to legal tax avoidance by wealthy companies. They do not accuse anybody of tax evasion. Somebody must have read them a potted history of defamation law.

Even dear Vera Baird, the former, thankfully, Solicitor-General, was out and about on Twitter at the week-end, defending their actions. Moral protest is to be supported by those formerly highly placed.

It is vehemently blogged in certain circles that the police were acting unconscionably in arresting the members of UKUncut who invaded Fortnum and Masons at the week-end, under cover of the dastardly violent rioters who were out and about. All UKUncut did was to introduce several dozen of their members into a venue that they would not normally be in, sit down on the ground, and draw attention to their dislike, on purely moral grounds you understand, of the legal practices that Fortnum and Mason engage in.

So far so good. Is this the new face of protest? I doubt it somehow, for there are several other ‘moral protests’ that could be made.

Imagine several dozen members of say, UKUngay, invading the Heaven nightclub, occupying a fairly large area of the dance floor, sitting on the floor, and drawing attention to their dislike, on purely moral grounds you understand, of the legal practices that members of that nightclub engage in. Sympathy from the ex-Solicitor-General, you think? Understanding articles in the Guardian? A broadly appreciative run through of their members and their ‘social media success’ by Channel 4?

How about several dozen members of UKUnexpenses, invading parliament, occupying the front office of IPSA, sitting on the floor, and drawing attention to their dislike, on purely moral grounds you understand, of the legal practices that members of parliament engage in when calculating their expenses. Would that attract the same high level approval of their actions, the same calls for the police to back off, the same claims that they weren’t actually disrupting the business activities, and they should be applauded?

What say you? What other ‘moral protests’ would you like to see get the same sympathetic coverage?

UKUncool :  for those of us realizing that —

· climate change is not anthropogenic ; and

· frost is inimical to life, warmth conducive to it.

A protest movement involving Tax Payers Bar Blocking the student Union of
all universities and stopping the smug little dicks that belong to UKUncut
drinking reduced price alcohol all week while tweeting on their Iphones that
they are struggling financially.

A movement involving the non-violent removal of scraves from middle class
students when they start complaining about how tough their 3 day week of study
is.

An non organised collective of the population with no coherent structure
who take the opportunity to punch people wearing Che Guevara T-shirts in the
face for no reason or explanation. Just people you disagree with their
political ideology you can express that in violent direct action. Then
uploading the image to twit pic.

How about Saracens and London Welsh taking over White Hart Lane for a
Saturday afternoon, when Spurs are scheduled to play someone like AC Milan?
St. Helen’s and Hull Kingston Rovers using Old Trafford for a friendly when
Man U were planning to play Barcelona?

What the very devil is this UKUcunt business anyway?
Never heard of
it.
Bewildered of Tunbridge Wells

That was what the translation made of Von Rumpy’s response to Nigel
Farage’s speech.

So it was a successful lobbying campaign that deprived us of the wisdom
of Obnoxio The Clown then?

I would like to see the concept of Unparliamentary explored once
again. Whereby a group enters parliament, declares they have sat too long and
achieved too little then forcibly removes the occupants. They could even go
into the churches and remove all the happy-clappy, homo-tolerant and druid
worship nonsense. Enter the universities too and impose Uneducated on
nonsensical studies and whatever-ologies that current agitators are “studying”
like flag-swinging, graffito scrawling, and being a general damn nuisance to
society.

Unfortunately, history suggests that Mr Cromwell rather fell prey to
similar authoritiarianism to that which he objected, and made himself
similarly unpopular with the general population – or at any rate that part
of it with a large axe.

An exploration of “unparliamentary” and “language” can be great fun,
however. Did you know that it’s unparliamentary to call someone a
“lily-livered poltroon”, for example?

Cromwell…”made himself similarly unpopular with the general population
– or at any rate that part of it with a large axe.”

Hmmmm, my reading of history is that Oliver was reasonably popular with
the plebs, royalty and the rent-seeking hangers-on were not too pleased,
especially when the axe fell on their little game (excessive taxation for
foreign wars amongst them and special favours for hangers-on, does nothing
change?) eventually Cromwell ended Charles 2 little game and formed a
republican commonwealth.

No doubt the puritan no-fun bits, were probably as onerous as the
catholic demands for taxation but in the end Oliver died a natural death.
His son took over and was incompetent (where have we seen that before?)
and the country quickly reverted to a monarchy. It says a lot about the
monarchy that they later exhumed his body and staged an “execution”. But
you guys love your crazy royals, bet you can’t wait for charles 3!

Thats when the brain drain started to the US. Thomas Paine could
probably give a better account of that.

The US now has king obambi 1, who is looking a lot like charles 2 and
may just start a civil war if he continues abusing the country’s treasury
and starting wars without consent of congress.

Just to be pedantic it was Charles I who lost his head and Charles II
who took over from Crowell Jr. We then had a slightly less bloody
revolution 28 years later to kick out his brother James II who was as
incautious as his father when it came mixing religion and politics.

As for the forthcoming Charles III the only good thing about him
becoming King is that we will hear a lot less of his opinions on AGW etc
in public.

I’m not sure your comment about charles 3 will prove to be correct.
time will tell.

I always associate the name with an anti-circumcision movement.

Then there’s the joke about removing the useless piece of flesh from the
end of the penis, with the punchline of “no, the other end, silly”.

I thought they were an anti-circumcision pressure group

No, They are not the Foreskin Appreciation Society but it does involve an
awful lot of skinny little pricks.

No, They are not the Foreskin Appreciation Society but it does involve an
awful lot of skinny little pricks with hoods covering the head

They’re the Cavaliers, the others are the Roundheads.

I’d have thought that UKUncut would sit on the floors of pubs.

I would suggest the Labour party conference. Protesting at their
destructive religion of socialism and the life opportunities it destroys.
However, I have seen then use private security to manhandle an 83 year old man
from the conference for doing the same, so heavens know what they would do to
me.

Interesting that they used private security for the purpose is it not? I
suppose that is a bit like the way they privately educate their kids.

UKUnIngSoc . Where do i sit?

Nah! wouldn’t know where to start.

Oh damn, that would be racist.

Nope EDL got there first.

This is trickier than I thought…

UKUnsalted – sitting in curry houses and fish and chip shops in Manchester
and object on moral grounds to the salt shakers just being out there, all
salty and dirty, begging people to put salt on their food.
Oh, wait. They
already banned those.

Well said, Anna! Well said indeed! My cure to the Uncut problem would be a
tad more permanent than any I have seen suggested so far.