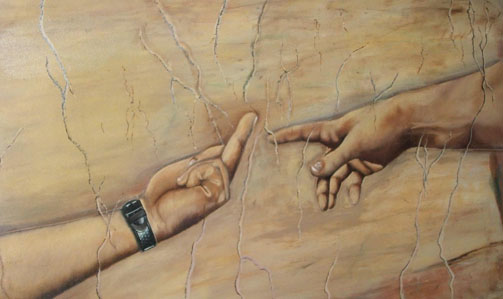 The Divine Comedy 2011 is story about a mans descent from Paradise to life
in the Hell he helped create. Each section details the various sections of one
mans fall from grace to suffering. It is a most uplifting tale.

Paradiso (Paradise) – Describes the life of a sinner and serial liar who
stole from the people he swore to protect, abused the laws he promised to
uphold and corrupted the system he represented.

Purgatorio (Purgatory) -Tells details a sinners fall from High Office to
political Limbo where he was cut off from all his previous lavish riches and
luxuries.

Justice – The shock the sinner faced when he realised he could not hide
dehind Parliamentary Priviledge and that all people must face their actions on
a day of judgement.

Inferno (Ring of Fire), Describes the sleeping arrangements within HM
Prisons and the feeling one gets after being buggered nightly in overcrowded
jails.

Also agree with JuliaM, what a great image!

I was not sure if Dante Alighieri reference would be appreciated or
whether it would pass un noticed. Thank you.

Odd how some names are inappropriate, isn’t it? The most murderous of the
Catholic Popes rejoiced in the name of Innocent!

(I wonder if anyone will attack my statement of ‘Catholic Popes’ on the
grounds of ‘what other religions have a Pope?)

I wonder if he’ll be sharing a cell with that other lying, lefty, Scots
politician Tommy Sheridan?

At the height of the expenses scandal a QT had the head of M&S on as
the non-politician.
His opinion was that “Anyone who breaks the expenses
rules gets their P45.If anyone manipulates the expenses rules that tells me a
lot about that person…”
There’s still a stench in Parliament over the
serial flipping and maxing out on expense claims, in all parties. In an ideal
world those people would have been deselected, but I guess local parties have
a different view of what’s acceptable.

Not enough, but a better result than I feared.