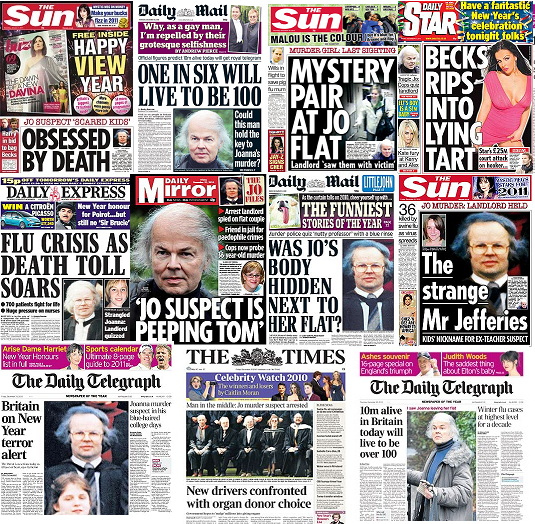 The media have come over all bashful and coy as a mid-summer bride. They no longer wish to shout Chris Jefferies name from the red tops, now he is buried deep within their pages – whisper it softly, ‘Jefferies, 66, has been released from bail conditions, Avon and Somerset Police confirmed’. Hush, we don’t want everyone to know.

Mark Stephens, in 2005 the 10th most quoted lawyer, Mr Rent-a-Quote himself, a man passionately in favour of freedom of expression – especially for ‘service providers’- has been rolled out to give his opinion on whether the coverage of Chris Jefferies arrest and questioning in the Joanna Yeates murder was likely to result in a successful prosecution for libel by Mr Jefferies. Contrary to the opinion of the man in the street, and yer average blog reader, Stephens thought it ‘unlikely’.

“No one’s reputation is likely to be enhanced by being interviewed by the police in connection with a murder but mud doesn’t stick, it quickly washes off,” Mr Stephens said.

That’s all right then, is it? His name is mud, but a quick wash should put it all right? I’m almost tempted to call Mr Stephens ‘weird’, ‘lewd’, ‘strange’, ‘creepy’, ‘angry’, ‘odd’, ‘disturbing’, ‘eccentric’, ‘a loner’ and ‘unusual’ so that he can experiment for himself to see how quickly those epithets wash off. Mindful that he is a highly successful defamation lawyer, I shall resist the temptation.

The Sun, from whom those charming labels emerged as their contribution towards ensuring that the guilty party eventually received a fair trial, is remarkably reticent today. Their coverage, amongst others, caused major concerns over the abuse of the contempt of court laws; not the fact that he was named as being ‘interviewed by police’ in Mark Stephens’ disingenuous quote, but the wholesale character assassination that accompanied it.

Chris Jefferies was bullied by the media; there is no other word for it. His personality was stripped naked and left on the sidewalk for all to gawp at; every facet of his life, even the most innocent – how unusual that an English teacher should have an interest in dead poets! – was reduced to speculation and implication, innuendo and finger-pointing.

His apartment, his every possession, his home, his life, was picked over with forensic dedication by the police. Quite right too, he was a suspect. That is their job. However, that is not to ameliorate the effect on Mr Jefferies. We are often told in the new fangled ‘victim impact statements’ how disturbing it is to robbery victims that someone has been into their home, how they feel they want to move house, can never feel clean again – and that is after a cursory search for valuables. Imagine what it must be like going home to a house in which every crevice, every orifice, every stain, every spec of dust, has been analysed, logged, tested, noted, picked over by a 100 interested people.

Little wonder then that Jefferies has put his apartment up for sale, it could never be a home again. Even the price is public knowledge, the one detail that the media are keen to reveal in their new found reticence, though there cannot be a forum of armchair detectives that has not pored over every last inch of the floor plans that were helpfully provided by the media at the time.

There are parallels in the media coverage of Robert Murat, fingered by the Daily Mirror in the Madeleine McCann story – he looked weird, acted odd, and provided acres of material that the media later paid heavily for. Ditto Colin Stagg, Barry George.

The media are keen to present themselves as superior to the blogosphere – and yet reading back articles on Chris Jefferies in the blogosphere, I find a rash of articles expressing horror at what the main stream media were saying. The major difference, it appears to me, is that the Blogosphere was accurately reflecting the man in the street – the media were looking for profitable hits on their on-line sites from those looking for ‘reputable news’ – and cared little whether part of those profits were eventually to be paid out in libel charges.

If Chris Jefferies is not able to bring a successful libel action over the character assassination by the main stream media, and I understand he has retained Paul Okebu of the Stokoe Partnership rather than a media lawyer who believes that mud washes off, then there is something very, very, wrong with our libel laws in this country.

It is said that they are draconian, that they curb free speech – if they are not capable of protecting a retired school teacher who happened to be helping police with their enquires from a total disintegration of his life on the grounds that ‘mud washes off’ then they need strengthening, not relaxing – and I say that as someone who writes every day.

Well put.  I’ve naused on about such matters (more in relation to contempt than to defamation), even in comments on this site.  Unfortunately you have not only a society run by the proletariat but one reported on — at least as far as the mainstream media go — by it.  Why should you expect gentle standards ?

How come it took nine weeks to release Mr Jeffries from his bail conditions after another man was formally charged for the same offence?

Popcorn out. let the show begin.

Congratulations on Title of the Week!
I feel like I need a cigarette now…

Perhaps Mr. Jefferies should take a look at Sky News Blogs. I could name a few posters on there that are never going to believe he wasn’t guilty. They can’t do that because it would expose their irrational hatred to themselves. Sadly, posters on Blogs and Forums seem to get away with murder.