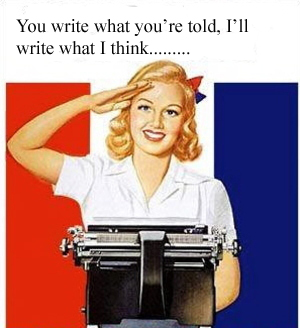 An object lesson in parting words as you fling open the door to that harsh, cruel world. Tantrumtastical.

Richard Peppiatt leaves the comforting embrace [Ed. Are you sure?] of employment with the Daily Star, and sets forth on the choppy seas of self employment where making a name for yourself is sooo important.

You probably donât know me, but I know you. For the last two years Iâve been a reporter at the Daily Star, and for two years Iâve felt the weight of your ownership rest heavy on the shoulders of everyone, from the editor to the bloke who empties the bins.

Wait! I know youâre probably reaching for your phone to have me marched out of the building. But please, save on your bill. I quit.

The decision came inside my local newsstand, whilst picking up the morning papers. As I chatted with Mohammed, the Muslim owner, his blinking eyes settled on my pile of print, and then, slowly, rose to meet my face.

âEnglish Defence League to become a political partyâ growled out from the countertop.

Squirming, I abandoned the change in my pocket and flung a note in his direction, the clatter of the till a welcome relief from the silence that had engulfed us. I slunk off toward the tube.

If he was hurt that my 25p had funded such hate-mongering, heâd be rightly appalled that Iâd sat in the war cabinet itself as this incendiary tale was twisted and bent to fit an agenda seemingly decided before the EDLâs leader Tommy Robinson had even been interviewed.

Asked if his group were to become a political party I was told the ex-BNP goon had replied: âNot for now.â

But further up the newsprint chain it appears a story, too good to allow the mere spectre of reality to restrain, was spotted. It almost never came to this. I nearly walked out last summer when the Daily Star got all flushed about taxpayer-funded Muslim-only loos.

A newsworthy tale were said toilets Muslim-only. Or taxpayer-funded. Undeterred by the nuisance of truth, we omitted a few facts, plucked a couple of quotes, and suddenly anyone would think a Rochdale shopping centre had hired Osama Bin Laden to stand by the taps, handing out paper towels.

I was personally tasked with writing a gloating follow-up declaring our postmodern victory in âblockingâ the non-existent Islamic cisterns of evil.

Not that my involvement in stirring up a bit of light-hearted Islamaphobia stopped there. Many a morning Iâve hit my speed dial button to Muslim rent-a-rant Anjem Choudary to see if he fancied pulling together a few lines about whipping drunks or stoning homosexuals.

Our caustic âus and themâ narrative needs nailing home every day or two, and when asked to wield the hammer I was too scared for my career, and my bank account, to refuse.

âIf you wonât write it, weâll get someone who will,â was the sneer du jour, my eyes directed toward a teetering pile of CVs. I wonât claim Iâve simply been coshed into submission; Iâve necked the celeb party champagne and pocketed all the freebies, relying on hangovers to block out the rest.

Neither can I erase that as a young hack keen to prove his worth I threw myself into working at the Daily Star with gusto. On order I dressed up as a John Lennon, a vampire, a Mexican, Noel Gallagher, Saint George (twice), Santa Claus, Aleksandr the Meerkat, the Stig, and a transvestite Alex Reid.

Iâve been spraytanned, waxed, and in a kilt clutching roses trawled a Glasgow council estate trying to propose to Susan Boyle (I did. She said no).

When I was ordered to wear a burkha in public for the day, I asked: âJust a head scarf or full veil?â Even after being ambushed by anti-terror cops when panicked Londoners reported âa bloke pretending to be a Muslim womanâ, I didnât complain. Mercifully, Iâd discovered some backbone by the time I was told to find some burkha-clad shoppers (spot the trend?) to pose with for a picture â dressed in just a pair of skintight M&S underpants.

Never mind that it insults the intelligence of amoebas when your readers are breathlessly informed the weekâs telly highlights include OK! TV and the Vanessa Feltz Show.

I suspect you see a perfect circle. I see a downward spiral. I see a cascade of shit pirouetting from your penthouse office, caking each layer of management, splattering all in between.

Daily Star favourite Kelly Brook recently said in an interview: âI do Google myself. Not that often, though, and the stories are always rubbish. âThere was a story that Iâd seen a hypnotherapist to help me cut down on the time I take to get ready to go out. Where do they get it from?â

Maybe I should answer that one. I made it up. Not that it was my choice; I was told to. At 6pm and staring at a blank page I simply plucked it from my arse. Not that it was all bad. I pocketed a Â£150 bonus. You may have read some of my other earth-shattering exclusives.

I know showbiz is the sand on which your readership is built. And while I didnât write tittle-tattle dreaming of Pulitzers, I never knew Iâd fear a Booker Prize nomination instead.

You own the Daily Star, and itâs your right to assign whatever news values to it you choose. On the awe-inspiring day millions took to the streets of Egypt to demand freedom, your paper splashed on âJordan â¦ the movie.â

A snub to history? Certainly. An affront to journalism? Most definitely. Your undeniable right? Yes, sir.

But what brings me here today is those times you dispense with those skewed news values entirely by printing stories which couldnât stand up to a gnatâs fart.

Itâs those times when you morph from being a newspaper owner into the inventor of a handy product for lining rabbit hutches. While the Daily Star isnât the only paper with a case to answer, I reckon itâs certainly the ugliest duckling of an unsightly flock.

Its endemic lack of self-perception really is something to behold. It only takes a comedian to make an ironic gag about racism and your red top is on hand to whip up a storm, demanding the culprit commit hara-kiri beside Stephen Lawrenceâs shrine.

Yet turn the page and Muslims are branded âbeardiesâ or âfanaticsâ, and black-on-black killings (âBob-slayingsâ, as Iâve cringingly heard them called in your newsroom) can be resigned to a handful of words, shoehorned beneath a garish advert.

Outraged, we brand other celebrities sexist, demanding such dinosaurs be castrated on the steps of the Natural History Museum.

Then with our anger sated itâs back to task, arranging the dayâs news based on the size of the subjectsâ breasts.

Were this the behaviour of an actual person they would be diagnosed schizophrenic and bundled into the nearest white van. But because the mouthpiece is a newspaper, itâs all supposed to be ok. Well, hereâs some breaking news â itâs far, far worse. When looking for the source of this hypocritical behaviour, I didnât have to go far.

The Daily Star seems to set out its editorial stall as a newspaper written for, and fighting for, the (preferably white) working class.

Yet as a proprietor you recently dropped out of the Press Complaints Commission, leaving those self-same people with no viable recourse if they find themselves libelled or defamed on your pages.

Your red top drones on about British jobs for British workers, yet your own reportersâ pay has been on ice so long it was last seen living in an igloo and hunting seals.

A great swathe of your readership lives in the north of England, yet you employ just one staff reporter outside London. One. I guess it makes the same sense to you up there in your ivory tower as it does to me down here on my high horse. I get it, I do.

Because no one has time for subtlety of language, of thought, when theyâre scrabbling to pump out a national newspaper with fewer staff hacks than it takes to man a yacht.

When you assign budgets thinner than your employee-issue loo roll thereâs little option but for Daily Star editors to build a newspaper from cut-and-paste-jobs off the Daily Mail website, all tied together with gormless press releases. But when that cheap-and-cheerful journalism gives the oxygen of publicity to corrosive groups like the EDL â safe in the knowledge itâs free news about which theyâll never complain â itâs time to lay down my pen.

You may have heard the phrase, âThe flap of a butterflyâs wings in Brazil sets off a tornado in Texas.â Well, try this: âThe lies of a newspaper in London can get a blokeâs head caved in down an alley in Bradford.â

I may have been just a lowly hack in your business empire, void of the power to make you change your ways, but there is still one thing that I can do; that I was trained to do; that I love to do: write about it.

Far be it from me to consider a journo to be speaking truth to power, but
more power to Mr Peppiattsâ elbow.

Richard should flounce up to Manchester, he is well suited to the BBC.

I once worked at an outpost of the Beeb producing TV mags for Dirty
Desmondâs empire, but they lost the contract ( and we lost our jobs) when
Desmond moved the operation to an industrial wasteland in the north where
school leavers would do the job for peanuts.

Only two things surprised me about what goes on inside a newspaper.

I thought they used the newspaper as the loo roll.

2) ââ¦you recently dropped out of the [PCC] â¦ leaving â¦ people with no â¦
recourse if they find themselves libelled or defamed on your pages.â

Iâm surprised that he thought the PCC had any bite. Itâs voluntary and only
gets involved if the article was really bad and the apologies arenât anywhere
near prominent enough. People are better off using libel laws.

Sorry, thought of a third thing. That he worked there for so long before
realising that the newspaper printed lies. All of them do this without
exception. They have been doing this ever since the invention of the
newspaper.

I can always use a Press Secretary with a creative eye for presentation of
the facts. Please forward your cv for consideration.

Oh My, indeed. I hope he prospers. But I have my doubts.

A most excellent article. It is good to see Mr Peppiatt has seen the light
and hope his perspective helps him to a successful solo career.

The most worrying thing about this is that people may buy such trash for a
laugh and to ogle at the size of the âmodelâsâ boobs on page whatever it is,
but they believe what they are reading!

âThe lies of a newspaper in London can get a blokeâs head caved in down an
alley in Bradford.â â this should be the journalistsâ maxim

Or âIf you donât read newspapers, you are ill-informed. If you do, youâre
misinformed!â.

Further evidence there are lies, damn lies and newspaper stories.

Magnificent.
I gave up reading papers a long time ago.
Since I
started reading blogs, Iâve been following occasional links, reminders of the
kind of rubbish that Iâve been missing.

There is clearly a substantial demand for such tripe, alas.
I wouldnât
want to ban it, but it needs to be loudly ridiculed. (Private Eye does an
excellent job, but only whithin their peculiar agenda, and to a minority.)

Richard Peppiatt, I hope you will prosper. Use what you have learned, itâs
valuable.

As Iâm a long-time subscriber to âPrivate Eyeâ Iâm already conditioned into
believing that Desmond is a cock, so I quite enjoyed this particular rant.

Oooh, time to break in a new tag, maybe?