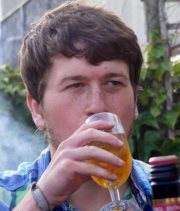 Jonathan Jones at the Guardian has excelled himself. He decided to turn his artistic critical faculty to a photograph of Mohammad Sidique Khan and Shehzad Tanweer – the two suicide bombers who took so many innocent lives with them in the July 7th bombing in London.

That makes them look bleak, brutal, snapshots from an apocalyptic nowhere. They are dehumanised, and at the same time translated into a type of harsh monochrome picture familiar from surveillance shots of bank robberies or car crash photographs screen printed by Andy Warhol. It is as if they have been fitted into a grim iconography of outsiders, judged already as enemies of society.

But the fact is that an artistic feel for the original would have been helpful. The colour picture taken by a surveillance camera has a robust human reality: it is a kind of contemporary British portrait. Two young men stand in conversation, smiling slightly, talking happily – shortly after a jihadist meeting. From looking at the picture they could be anyone and this could be anywhere in Britain. There is a definite sense of friendship – it is a warm moment. On a cold day – Tanweer has his woolly hat on – at a dreary looking motorway service stop, they could be joking about anything. Or they could be talking about killing for God.

It was too much for his commentators, more used to his airy descriptions of Vermeer.

The comments thread dissolved into rage. Many of those most ‘artistically expressive’ comments have now been removed, for not abiding by ‘community standards’ but not dear Jonathon’s responses….

“Yeah, thanks for these incredibly enlightened comments, but there is nothing artsy fartsy or pinko liberal about pointing out that a more sensitive eye for this photograph within MI5 would have had more chance of catching these men before they became mass murderers.”

The thinly veiled sarcasm didn’t last for long – more abusive comments flooded in, and were deleted, the moderators must have been working overtime. This paragraph in particular was regularly quoted:

The blurred soft tone adds to the banal everyday quality. Knowing who they are, an artist could turn it into a history painting along the lines of Gerhard Richter’s great modern paintings based on photographs of the Baader-Meinhof gang…

…In this picture we actually see Khan and Tanweer as human beings, as if in a portrait – that a hypothetical artist basing a painting on it might even see an analogy with the French 19th century painter Gustav Courbet’s portrait of himself meeting a friend on the road, an authoritative study of the moment of meeting and recognition.

Within an hour Jonathan had had enough. Comments were closed, but not before his parting shot….

“Go and get the paperback of my book The Lost Battles when it comes out end of March, read it cover to cover, and then write me some letters of fucking apology for your disrespect.”

Oooh dearie……methinks Jonathan could do worse than sign up for Iain Dale’s exclusive seminar on ‘How to fight your corner in the comments…..

Nothing like hissy fits at the Grauniad for entertainment…

Ooh, I don’t know – hissy fits at Anna Raccoon can be quite rewarding
too….

“…pointing out that a more sensitive eye for this photograph within MI5
would have had more chance of catching these men before they became mass
murderers.”

Yes, I’m sure Sir Harry at MI5 is kicking himself at the frustrating
enrolment quotas that mean he can only employ maverick IT experts, ice-cold
ball-breaking bitches or Russian prison alumni using false identities. If only
he could employ some art critics instead…

Is this Jonathan Jones on the same planet as the rest of us?

I wonder if the surviving victims of these murderers had any ‘artistic
feel’ for their experiences? I suspect that their feelings were far more stark
and direct – and not at all artistic. A little more respect for them – and for
those who didn’t survive – might not come amiss.

I have no respect for anyone who uses the activities of the worst type of
mass murderers for their own self aggrandisment or profit. That won’t change
whether I read his book or not, ‘not’ being the intended outcome.