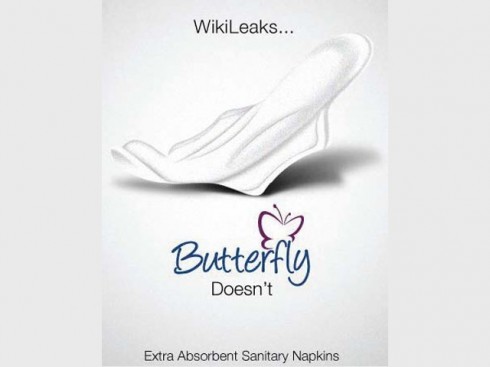 They will be pleased to serve you with a Wikileaks cover for the laptop you are leaking to them on, numerous Wikileak t-shirts, but one conspicuous omission.

It could prove invaluable for those fearing imminent arrest.

h/t to Jon Slattery and also the unknown person who sent me the advert from Pakistan.

Any market for a Wikileaks u-bend sleeve for the gallons of drivel they
published?

Hello Anna!â¦â¦When, to my grief, you very understandably threw in the towel
some months ago, I sadly removed your name from my Favourites daily
must-reads.
That youâre back again is a joy to me & this time round I
hope youâre refreshed & resolute enough to stay in the kitchenâ¦.there are
some very unpleasant people out there, but I donât have to tell you that.
A
belated welcome back to you & thank you for interesting & provocative
readingâ¦.again!

Are the Yanks responsible for monetising? I know they do a lot of it but
Iâm not sure the word is their invention. My dictionary suggests itâs a French
loanword that someone in the English speaking world borrowed in the C19th, Iâd
guess probably an economist. They can butcher the language over the pond but I
donât think they deserve the blame for this one, though if the Pakistani
hadnât come up with the pad Iâm sure someone in the US would have.

Thatâs what makes this blog so good, the wide range of topics. A plea for
better English followed by a papillon! The French dictionary shows that itâs
also slang for a parking ticket for some strange Gallic reason.

Are you or they taking the proverbial?