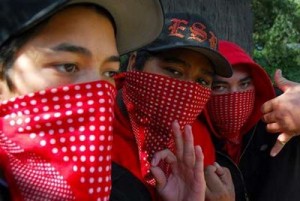 James Brokenshire (not just his name but his ideas are broken) as the minister in charge of crime prevention has just thought of a new wheeze and a method by which he can raise his image and pretend to be doing something. Or at least the civil servants in his department are doing their damnedest to show that their department is actively doing things and shouldn’t have their budget cut.

It’s new laws to outlaw the wearing of multi coloured clothing, taking a dog for a walk or walking on the cracks in the pavement. Sorry I should be serious, but it’s hard when politicians come up with some really stupid ill-thought out laws. What the government is really trying to stop is the wearing of gang colours, taking aggressive dogs for a walk and walking in another gang’s territory in an attempt to “break down the gang culture”.

The new laws are a bit different from ASBOs. They seem to have learnt that they didn’t work and that they criminalised people who never broke a law in the first place, just annoyed someone. But I don’t think they learnt the full lesson since these new laws will do exactly the same as ASBOs – nothing. Instead they will use injunctions to try and stop gang members from doing naughty things. And the organisations that can bring raise the injunctions are the police and councils, same as ASBOs.

But as usual with politicians they haven’t thought it through.

Are the laws going to be used to stop middle-aged fair-weather bikers from wearing their distinctive colour coded leathers with their badges of association? If not why not? Aren’t laws supposed to cover everyone equally. Will it be because the person committed a crime in the past? I’m sure some of the bikers might have some criminal record of some type.

What are a gang’s colours anyway? A football team shirt? What if the opposing gang’s “colours” are red and blue. Does that mean that everyone who wears red or blue clothing is a gang member?

Why are they banning a person from entering some particular area. An area “belonging” to another gang. All this does is provide official recognition of gang’s territories and means that a gang can take another gang’s member to court for walking in their territory – if they can’t be bothered knifing him.

And how will it stop gang culture when we already have tough laws for carrying offensive weapons and committing violent acts which don’t seem to have stopped it. As if a criminal is going to be that bothered by an injunction.

Violent gangs have always existed since the Victorian times and prior. Even then they did violent things. No law will ever stop them. Only society will stop them by providing alternatives and by making the gangs look uncool and stupid.

we do seem to be reverting to the golden age of the unrestrained violence
of the Mohocks of C18th London. Is that a good thing, necessarily? I know it
was the Age of Elegance and all that…….

What chills me about the modern wave of juvenile gang related murder is the
utter indifference to the huge crowds within which the gang members perpetrate
the crimes: rush hour in central London seems to be favourite at the moment.
So neither the presence of huge numbers of potential witnesses (let us
discard, with a hollow chuckle, the possibility of intervention passers-by )
nor the possibility of collateral damage to the innocent (another hollow
chuckle here, perhaps?) acts in any way as a deterrent.

Wonder how that affects Clan tartans? Apparently, they banned them once,
thus making them much more popular.

Shouldn’t have said that. We’ll have street gangs taking up the bagpipes,
now……

Excellent point! Whilst one can have sympathy with trying to control “gang”
culture, this is a cumbersome and unhelpful plan.
And you are right about
the gang culture. A lifetime ago I studied “History of Crime” as part of my
degree. Gangs were in many ways much more terrifying than today, getting into
no go area territory: the word Hooligan of course derives from one such
infamous gang. I remember reading a rather wonderful account of how smuggled
goods were seized by “the Revenue men” and taken away to their base. The
people of the area rose up, rioted, beat up the 18th Century VAT man and
marched back with the goods to their town in celabratory procession.
I have
to say, I have some sympathy!!
G

its an interesting vein to pursue – the are all too many similarities
between the state and a ‘criminal’ gang. organised crime on the scale of the
mafia even have welfare programs. in recent memory the people of the
jamaican slums ruled over by christopher dudus coke seemed to prefer him to
the official jamaican authorities. organised criminal gangs have always
elicited such praise to a certain extent (i know it shouldnt be overstated)
for example the krays in london and paramilitaries in ireland. locals have
claimed that the violent gangs actually brought order, stability and boosted
the economy. there are tales of totally non gang related local disputes
being brought before town mob bosses for arbitration almost like a village
elder or tribal chief.
how is the state charging a local business ‘rates’
under threat of punishment to pay for police any different to a mafia
protection racket? at least in a mafia town there is no unsanctioned crime.
the state’s protection racket isnt even effective.

Well, that’s a very political view which I would have to consider,
although I can indeed see your point!

what defines criminals is that they break laws. trying to prevent that with
extra laws will not work because they have already demonstrated that imposed
laws are no limit on their activities. for example banning hand guns because
criminals use them does not stop criminals using the now criminal
weapons.
we dont need to crack down on gangs on the basis that they lead to
crime because we already have laws that deal with the crimes. murder and
assault are already crimes so any new tinkering is merely admitting the
failure of the extant system. if the old laws are no deterrent then how will
these new ones be?
as usual the coercive statist solutions are as useless
now as they have been for the last few thousand years. polycentric,
voluntarist legal systems are not only principled, ethically consistent and
rational but would be pragmatically superior too. suggestions usually involve
a system of honour rating agencies or honesty feedback scores. sort of like
ebay for the real world. each time you fulfill a contract you gain a point,
each time you break a contract you lose points. you would subscribe to
voluntary legal codes for protection. aggressing against the person or
property of another would be a breach of the contract you signed preventing
others doing the same to you. this would damage your legal feedback score and
would now find it nigh on impossible to find work, food, housing, transport
etc. because no provider would want to risk doing business with an individual
proven to break contracts. pretty powerful deterrent.

What about the female gangs seen roaming our streets dressed all in black
from head to foot with their face covered – and their male counterparts in
salwar kameez and long black beards?
Oops sorry, forgot, that’s their right
to free expression and it would be an infringement of their rights to
legislate on how they dress……

Like the ASBO the GANGBO will be seen as a badge of honour.
I remember
being sent home from school for having my hair too long (hippy) and another
boy being sent home for his being too short (skinhead). Any attempt to
legislate against a dress code is doomed to failure and ridicule.

There’s a gang in The Smoke who wear Old Etonian ties who need watching.
One of them keep going on about “cutting” and another is after your
wallet.

What’s Mr Brokenbiscuit going to do about white or tortoiseshell cats? Or
felines of other colours? If I want to chill with my multicoloured homies here
in Streonaeshalch, I’ll defy him and his mates to arrest me. I’ve got claws
and teeth, you know…

If we are talking about anti social gangs, we must include grey suits and a
gang that call each other the honourable member

HELLS ANGELS and the skull logo (R) are trademarks owned by Hells Angels
Motorcycle Corporation, registered in the USA and in many other countries. All
logos and designs of Hells Angels are trademark-protected
(TM) and
protected according to international law. Copying and other use is not
allowed.

The Public Order Act 1936 S.1 appears to have been rather
successful in banning political uniforms.

To be fair to the Minister, this legislation was passed by the recently
out-gone Parliament. However, I expect the current minister could have not
brought them in, if the fancy had taken him.

What about those fighting Montagues & Capulets, complete with their
house colours?

As the links are from Daily Mail & Guardian articles, I’m not sure this
is a serious idea. But it’s definitely a stupid one!

Oh dear, I think half the village has just been criminalised :
gang
uniform – check , dull green.
Young teenagers involved – check , anyone
over ten welcome.
Carry knives – check, half the gates are tied up with
baler twine.
Carry guns – check , a minimum of eight.
Seen as a badge
of honour – check, waiting list for guns, always masses of beaters.

“Only society will stop them by providing alternatives and by making the
gangs look uncool and stupid.”

I think, like many people, that politicians are uncool and stupid. Does
this discourage them?

Of course not and for the same reason that it will not discourage gangs.
Power. The only difference is that the politicians have a bigger ding heap to
crow from.