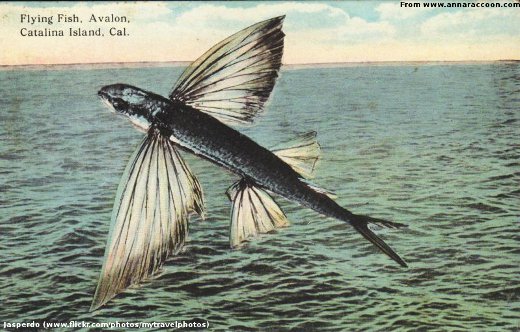 The Environment agency is ‘poised’ – roughly translated as, risk assessment has been done, contracts for transport agreed, all expert reports in and paid for – to airlift thousands of freshwater white fish from the Lake District to the Scottish lochs where they will be ‘safe in the cooler waters’ – judging by the past few months weather in Scotland, they will be exceedingly safe unless the Scots cotton on to the Icelandic method of fishing through ice holes.

This expensive operation is naturally a result of that phenomenon known as global warming…..

Climate change is one of the greatest challenges facing the world today. We are beginning to feel the effects in the UK. […] we are also on the front line, helping communities and organisations to be ready to face the consequences of more extreme weather.

The Highways Agency is also releasing a report this week of their efforts to combat global warming, which include the gem that they have lately taken to resurfacing the motorways across England with a new material called ENE2, a wondrous substance which has done an excellent job on the roads around Cannes and Nice in protecting the surface from temperatures up to 60° Celsius. Those trapped in ice and snow bound motorways must have rejoiced at their foresight; heavens they could have resurfaced the roads with a solution of silicon bristles which prevent the surface from freezing.

The Highways Agency said the changes were part of “strategic planning for climate change, where we have researched the likely effect of higher temperatures on carriageway surfaces and on the deeper layers of the road structure”.

Amusing as these gibbering idiots may be, we should remember that we are paying their wages. Perhaps we could swap some of the ‘front line public service cuts’ that will leave Grannies dying a lonely death in their hovel, for some of the morons that wish to speed up evolution.

Did no one tell them that fish develop wings when they need to get somewhere faster than their little tails can swim?

Fish don’t need to fly. Those which lay sticky eggs on water plants often
find those eggs sticking to the feet of waterbirds and the fish eggs go with
the bird.
This is how fish appear “by magic” in an isolated new
pond.
This fish moving contract seems like a money making scam.

Me an’ my spelling, huh!

And this was like the coldest year overall for over 20 years and the
coldest December for over 100 years. Australia has had its coldest year for
decades but, we are told, 2010 was the hottest year ever globally. Kinda weird
that. Did you know that most of the earth, being coverec in sea, has no
temperature stations? So the climate boys estimate the temperature. On land of
course the pesky thermometers end up near man made heat sources in some cases
and are not reliable. The culprit however is the sun. Funny how Piers Crobyn
gets the weather forecast, long range too, right using measures taken from the
sun whilst our met office, using computer models gets it totally wrong. Now
what methodology are climate scientists using?

And the “Hockey Stick” is a fraud too.

1. Produce theory that proves what they want to prove.

3. If data does not fit theory, adjust until it does.

And if anyone criticises you or ask for your data so that they can
check the results themselves label them all as attackers and bunker down
with your cohorts and go “nah nah nah, I’m not listening ’cause I’m
right and you’re wrong”

At last a proper use for ‘no longer fit for purpose’.

I too posted on this subject this morning. If you don’t mind a cut and
paste Anna:

Other climate change adaptation reports which will be released this week
include those by National Grid, covering gas and electricity, the Trinity
Lighthouse Authority, the Highways Agency, Network Rail and Natural
England.

So there are more reports coming (I believe on Friday)/ More begging for
our money.

Many theories have been adhered to long after it’s been obvious to sane
(and scientific) folk that they have been comprehensively discredited.
Politicians will soon accept what real scientists (not climate change data
processors & self-promoters with their funding interests) are now
saying:
CO2 from human activity is not a problem. Sun spot activity and
other natural cycles account entirely for global temperature fluctuations. The
world is at the transition point between ice ages and overall cooling is
likely in the next 200 years. It was all a scam for tax-raising purposes.

Oh dear. I do hope they consulted His Holiness Bishop Georges Moonbat
before taking this decision. (I have it on good authority that he is the
supremo of this noxious cult.) But there’s a moral dilemma here, isn’t there?
Have they even thought of measuring the carbon footprint incurred in carrying
out this exercise? If they want to be carbon neutral, they should all carry
the fish in panniers on donkeys. I’ll be at the other end to help them..

Oh Dear God ! This is one of the frontline services they are trying to
defend ?

……….so, what happens to eco-balance of the Cumbrian lakes when all these
fish are removed?

………so, what happens if the fish are some how traumatised by their capture,
transport and relocation that they suffer shock and die?

………so, what happens if the fish survive the translocation, but don’t like
the Scottish lochs and die?

Fucking idiots – justifying their jobs by wasting tax-payer’s money with
their superfluous meddling.

I see this quote again and again from the automatrons.
I think the give
them little cards with stock phrases to read out during press
releases.
Just in case they say something silly.

Keep repeating it often enough (and rely on allies in the MSM to never,
ever challenge it) and eventually, enough people will come to accept it as a
‘truth’…

Memo to self: do co-ordinate brain, eyes and fingers!

You could always try ‘carptrap’……..

I always knew there was something ‘fishy’ about all this global warming
calptrap!

Those whom the gods wish to destroy ….