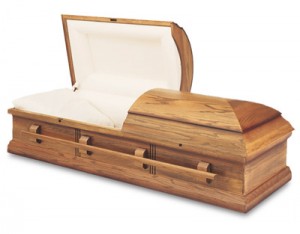 Redditch council is planning on using the waste heat from a crematorium to warm up a swimming pool. Their plan is to save money, nearly £15K/yr by diverting the heat that would normally go up the chimney into heating the public baths.

The problem they have is that they expect it to be perceived as gross, sick, in poor taste, and disrespectful to use the heat used to burn dead people into providing a useful facility for the living. I suspect this is the same perception that cremation had before it was introduced. The first cremation in modernish times was in 1885 but it wasn’t actually legalised until 1902. Until then it was seen as something to be reserved for the truly evil and other heathens. So to burn a body was seen to be disrespectful to the dead.

In fact because it’s not discussed I suspect that if people realise that the left over metals such as hip or knee replacements or even pins used for badly broken limbs is sold as scrap ready to go into the next plane they would be just as disgusted. What about the waste of natural resources with the casket. In the UK only a wooden casket can be used and it has to be burnt. In many other countries cardboard is used during the actual cremation. This would disgust many other people.

But it’s not all people who would be disgusted by the various methods of body disposal. Some see it as a good thing that something productive comes from the dead, something that would be just buried and forgotten about otherwise.

Times change. Society changes. People change. We are born, we live, and we die.

Times change. The next method for the disposal of dead bodies is probably going to be alkaline hydrolysis. This is where the body is dissolved in an acid under high temperature and pressure leaving very little behind. It’s advocated as the next best thing because the heat isn’t anywhere near the temperatures required for cremation. However the remains aren’t generally thought to be easily and neatly handed to relatives to put on the mantelpiece, though the process does leave bones which can be cremulated to produce “ashes”.

Society and people’s attitudes change. Hydrolysis is perceived as vile and dehumanising as the remains can easily washed away into the sewer system. Or that the remains might end up in the water we drink, a bit like Soylent Green. But you can’t say that it will be seen that way forever, especially if the issue of flushing away is overcome. Maybe instead dead bodies will be launched into space as that is neat, tidy and nothing horrible happens to the dead body in space – well not that you can see anyway.

When we die there’s not much you can do with your remains except stop it putrefying and causing a mess. How we do it doesn’t make much difference especially to the dead body. What it does make it a difference to are the surviving family, relatives and friends. They still care about their relative who passed away and it’s their memories of that person which is the most important. If they need a token to look at or go to to remember then there are many objects which can provide this from gravestones to urns to a tree or bench or even a piece of jewellery.

Personally I see an urn containing ashes placed on a mantelpiece as just a little bit creepy. I would prefer hydrolysis or even frozen in liquid nitrogen and crushed into smithereens. But then that’s me. Your mileage may vary.

Once I am dead, I will not care what happens to my body.

Buried – a waste of space and poluting the groundwater.

Pickled – what happens with the residue? More polution ?

Armin
Meiwes has the answer.

We won’t be firing bodies off into space anytime soon. The energy cost of
lofting that mass into earth orbit is phenomenal, and there’s too much junk up
there already. One or two favoured people have done it – the astronomer Gene
Shoemaker and the actor James Doohan (‘Scotty’) come to mind – but they were
cremated first anyway.

Not sure I like the sound of Alkaline Hydrolysis. I’m pretty sure you’d end
up with a mixture of soap and Bovril.

(they creak horribly when being borne up the aisle …)

I’ve already stipulated in my will that when I’ve shuttled off this mortal
coil I wish to be buried. Since government – local and national – has been
such an imposition, the least I can do is to contribute something to its
environmental worries.

My wife wants me to keep her ashes on the mantlepiece until I go as well so
that we can scattered together. It’s a nice thought. Howover, I suspect the
real reason is to remind me she’s watching!

I oppose the use of wooden caskets – cardboard or a sack is fine by me. Or
even wool like the old days. If I have to have wood, then it must be the
cheapest available. They’re only going to burn it.

My late brother-in-law was a funeral director. He used to tell tales of
some crems selling the coffins back to unscrupulous undertakers…

Anna, it’s not the fact that waste heat from the crem is used to heat a
swimming pool, it’s that, in order to be efficient in the heating process, the
swimming pool will need to be fairly adjacent to the crem! I’m not sure the
juxtaposition of these two facilities is really tasteful, especially when
corteges are passing while schools are dropping off children for the weekly
wash – sorry – swim.

Well, I Woking (St. Johns) We have exactly that. The Crem is directly
opposite one of the Schools….

Not far from my home is an extensive woodland. It has been bought by a
charity which will bury your dead relative within the forest, using a wicker
casket. A tree planted above the departed will benefit from this enrichment of
the soil.

Since our bodies are 80% water, cremation rather neatly converts most of us
to vapour, which is then breathed and absorbed by those living along the
smoke-plume path. Other vapour falls to the ground and makes its way to the
watercourse, other may fall on your salad crops and be eaten for tea, so
you’re shared around quite widely, really. Together with water vapour, the
finest ash also goes up the chimney to fall out similarly; those living
down-wind of crematoria sometimes find their cars coated with a fine, thin
film of dead people. I’m all in favour of this – it all seems quite wholesome
and organic to me. And since I shall be breathed / eaten / absorbed by those
vegetarians and vegans who irritate me so much in life, I am definitely going
for cremation, in the most inefficient facility available.

I can confirm that. I work betweeen a crematorium and a bakery. Depending
on which way the wind blows we get either a pork smell or a bread smell.

“Can you help out neighbour, we have a wedding order and the oven is
broken. I wondered if we could….”

I kinda like the idea of open-air cremation. Or do I?
Dunno. I’ll think
about it another day.
A lot of problems go away if you ignore them.

Alkaline Hydrolysis, by definition, involves the use of an alkali, not an
acid as stated.

Opps. It was late and I was tired!

My very ex-wife once had a job working in the office of a Crem. I recall
her saying they did use cardboard boxes and they took the handles off the
wooden coffins before they were burned. There was also a bone-crunching
machine because the fire did not reduce the bones to dust. As for the ashes,
you just got what was in the oven at the time.

The saddest cases were what they called “anatomicals”. Anatomicals were the
bits whose owners in life had donated their bodies to science. Usually, these
bits were kept in labs for years until finally, what they could not use was
returned to the Crem for disposal. Often there was nobody there to mourn
them.

Weasel, you are right, in the great majority of cases. It really does
happen, more to the “usual” than the exception.
Now concerning medical
science… I once was a lab tech in a hospital, many moons ago. There were
things there to really make anybody’s blood run cold, that somebody
somewhere (Mentioning no names!) had gone against the wishes of both the
person’s family, of the person themselves sometimes, and occasionally even
of the Law, to keep back.
I won’t elaborate, it’d give all readers
permanent insomnia problems.
Now, strangely enough, I am an
insomniac!

Although I agree, ashes in an urn in the house is a tad creepy, our family,
-luckily taking my adive in recent years- cremate our dead and get rid of the
ashes completely, either by burying them or spreading them in a place either
specifically requested by the deceased or where they think the person would
have wanted them.

I don’t think the dead should be recycled to make energy or consumables of
any sort, – let us not forget the classicof science fiction, Soylent Green,
please peoples!

The dead aren’t recycled. Simply the excess heat from the industrial
burners used in the cremation process.

Well on that cheery thought I am of to bed