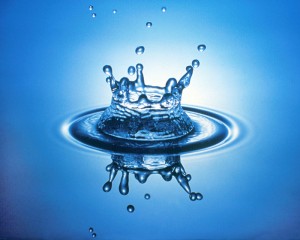 We are always told to drink lots of water. We are bombarded with these messages from TV/Radio health programmes, government health propaganda, and advertising from drinks companies.

All this on the basis that our bodies allegedly can’t tell us when we are thirsty. It’s the state interventionist way of saying that “we” know best and you should carry around a bottle of water so that you don’t die and don’t end up with wrinkly skin when you get past 45.

Sometimes the interventionist message is the total opposite and they will ban the bottle.

The drink companies pick up on this and use it in their advertising to push their products. Weirdly for something that is natural and all around, the companies have to go out of their way to say that their product is better than the rest. Either because it includes extra sugar or doesn’t include sugar (I didn’t know H20 included C6H12O6) or many other minerals or ingredients. None of this extra stuff makes the slightest difference to our bodies. Water is water.

Our bodies are miracles of water conservation. It can collect water from a wide variety of sources not just “pure” water. Did you know that it can collect water from food too. Its amazing how much water some foodstuffs hold. Just cook some rice and see all the water disappear into the rice. You’re drinking water whilst you eat the rice. So eating a curry with rice goes towards your two litres a day requirement.

In fact our bodies don’t need two litres a day. It can be as much as six litres in some very hot dry climates. In the UK, it can be less since we aren’t in a hot climate. In fact for office workers who have a cereal with milk and coffee in the morning, some soup at lunch, and a good evening meal along with regular cups of tea/coffee during the day do not need any extra water at all. And extra water to keep your skin wrinkle free doesn’t make much difference either.

So free yourself from the bottle.

Are you drinking enough fluids ?

Simply look at your urine ! If it is a light straw colour – all is OK. If
it is dark yellow – drink some more fluids.

Large bottles of spring water are provided to council workers, at tax
payer’s expense. It was one of the unnecessary expenses that annoyed me when I
was working for our local council. The provision of spring water is treated by
council workers as a right, rather than a privilege paid for by us all. I
wonder how many millions of pounds councils would save by forcing council
workers to drink tap water instead of expensive bottled spring water. The
invoices I saw were regularly £30 a pop every few weeks – times that by all
the council offices up and down the land and you realise that we, the tax
payer, are keeping spring water companies in business for no other reason than
council workers think they should be provided with it, free, gratis. Oh and
they got very annoyed when it ran out.

I have always drunk loads of water and I’ve got some really interesting
wrinkles.

As for my dog, he point blank refuses to drink tap water so I have to go to
the nearest stream when we have a drought.

Wanna buy sharse in my new designer lifestyle product – Eau de Robinet?
Launch price, £1.99 (3.8 euros) per 3.3 ml handipak; With the 2 litre
industrial strength Whoppa a no-brainer @ £7.99.
Best of all, it’s eco
friendly – bring your empty bottles to us and we refill at the standard price
(**plus 13.5% handling charge).
And thanks to our unique hydro-Xtream straw
system, you can even drink as you jog – be a sucker at no extra cost!
(May
contain nuts – yours, if you’re not careful)

Another “study” that presumably all right-thinking people will pronounce
that “everyone agrees with”provided by our benevolent ober-lieutenants.

It has surely been proved that you are TOO STUPID to drink a watery
concoction if you are thirsty, therefore you are directed to carry around the
twenty-first century equivalent of the tittie bottle. Your masters want to
ensure that you never grow up and remain infantilised, dependent on their
largesse.

Remember -the state knows best, and if you have any doubt the big society
will soon put you right.

water, if you live in a soft water area, , the water its acidic, hard water
area alkaline ,,,, a ph of 7.2 thats what the body requires, i like mineral
waters not normally containing fluoride.or hormones left over from women,s
piss

For Churchill it was 2 quarts of brandy a day… good enough to fight a war
on..

Absolutely spot on there woodsy …. cats smarter than politicians … no doubt
whatsoever.

And you can’t herd politicians either. Try getting them to head in the
same direction and they all go off in different directions.

Actually if we feed them tinned food our cats don’t drink water but if fed
dry cat food they will drink quite a lot of water, although they don’t like
stale small bowls, they prefer to get on the sink and lick the tap or find the
pond.
Oddly though they seem to be able to regulate their intake without
carrying a bottle around and without benefit of governmental nannying about
how much to drink.
Clearly this proves cats are not just smarter than dogs
(which goes without saying) but also smarter than politicians.

The “caring” state was pushing this message back in the fifties &
sixties as, “drink six glasses of water a day” (although the size of the glass
was never mentioned). It’s all nonsense – as SBML says, your body knows when
its thirsty. Selling UK idiots bottled water must be one of the biggest scams
in history, due to our high quality tap water.

Water sucks! Bottled water companies should be forced to clutter their
labels with warning messages and photos of drownded corpses fished out of the
Thames, and people suffering chronically wrinkled scrotums from sitting in the
bath too long. People who actually want to drink water should be made to stand
outside in the rain and drink out of dunces caps. Where are the health nazis
when you finally need them? Cats are smart, dogs are not; cats hate water,
dogs love it: need I say more?!

And let’s not forget the extra drink we get from the various foods we buy
in supermarkets too, you know, things like chickens, ham, bacon, etc, where
the law permits companies to cheat us by forcing lots of water under pressure
into products, so that it weighs more and therefore costs more.

Anyone on a normal diet who drinks when thirsty is highly unlikely to
suffer dehydration. We haven’t survived for hundreds of thousands of years by
not knowing when we need to drink water. On the same theme, why are we the
only species on Planet Earth to need use-by dates on our food?

I suspect the 2-litre rule is pure invention, like the alcohol units or the
5-a-day fruit and veg myth. Listen to your body. It will tell you what it
needs.

I have a large tea mug at work, and also one at home. I probably manage to
drink six pints of tea, sometimes seven. Add in the milk on my breakfast
cereal and that’s a lot. Who needs bottled water?

It’s worth noting that I do get to walk away from my desk and stretch my
legs fairly often too, all that excess water has to go somewhere…

Agreed SBML
Bottled water has to be one of the most expensive drinks on
earth when you consider how little has to be added to the basic ingredient –
tap water. Interestingly if you drink enough water a day you dilute fluid in
the kidneys so that you can no longer concentrate you pee properly. So you
piss more and need to drink more. Guess what guys, the people who sell bottled
water worked that out a long time ago.
You certainly don’t need 2L a day in
UK in winter. I don’t get above that by all that much or all that often in
summer in Perth, Australia unless I am outside a quite a bit. And that’s at 35
Centigrade not Fahrenheit.

What’s that joke about the worms in a bottle of Tequila…?

Now what was it W C Fields said about drinking water?