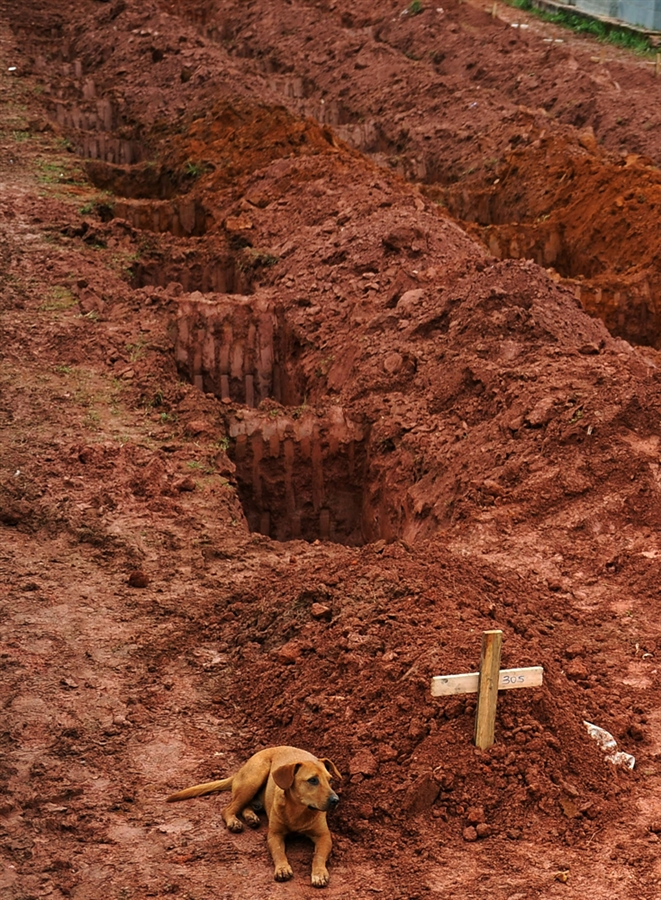 The world media haven’t found it so easy to wring the heart wrenching front page stories out of the flood disaster in Brazil as they have done in Australia.  It’s not so easy to travel in the devasted region, the inhabitants don’t always obligingly speak English.

Could any amount of words sum up the sheer desolation of this dog sitting by it’s owners grave – No 305 of 617?

I suspect that the devastion in Brazil was more contained. That is, despite
it’s awful toll it affected a much smaller area. The casualty numbers are
horrific in Brazil, limited in Australia because of better building standards
etc.

Anyway guys, when half of York gets washed away, killing scores don’t
expect the UK media to know what is going on anywhere else. Even if it happens
at the same time.

I’m not a cynic. And I really did need to see that picture.

well – I blame in large part the very presence (or absence) of moving
pictures. How many times have we seen on UK TV some “dramatic” footage up near
the top of the evening news running order. Something of earth shattering
importance such as, oh, a car chase in Miami perhaps, a skateboarding dog or
some-such.

Meanwhile in Iran the execution rate goes up, free speech is oppressed in
Burma but – no pictures , so sorry – not on the news……

Same syndrome that had British media constantly talking about the awful
tragedy of a handful of UK citizens dying in the 2004 tsunami. Yes, it was a
tragedy, but err, there werer nearly a quarter of a million tragedies that
Boxing Day.

I remember it irked me particularly at the time.

If that be verily the grave of the dog’s human, we really ought not to be
surprised by its remaining nearby.  A mammal of any type (not just a
domestic one), once it has befriended a human, is a friend for
life ;  the failure of humans to understand this and to understand
that such animals have emotions cause many animals to suffer in a way that,
were they human, we should find abhorrent.

The failure of the media to afford coverage to the floods in the state of
Rio given to those is Queensland is, I suspect, only partly a matter of the
fact that – as Angry Exile amusingly puts it – the locals speak
something that sounds like English.

Years of watching the development of the tropical World and ever more
detailed television reports not only of natural disasters but also of
atrocities such as suicide bombings have dinned in to us an entirely
irrational belief that brown-skinned peoples care less about the deaths of
their loved ones than we.

Oh, Anna, you are clearly a ‘glass half-full’ personality. I see a dog
sitting by a freshly-dug grave in a third-world country, and devotion and
loyalty isn’t what first springs to mind…

Ah you old cynic Julia!
Actually the first thought that came to my
mind was – exceedingly well fed and well groomed dog, posed beatuifully for
photographer……possibly followed him home too, as usual…….
I’m a cynic
too.

What a loyal dog.
There’s what looks like a piece of fabric beside the
cross – if it belonged to the victim the dog is probably sensing it. (I am not
suggesting improper or incomplete burial – it’s just cloth.)

I’ve been wondering about the discrepancy in reporting myself. I’m
bombarded with images from the Queensland floods, and now the flooding here in
Victoria, because I live here. I was surprised to hear that it was such big
news in the UK when the damage is mostly being totted up in dollars rather
than bodies (though they seemed to have missed the plague of locusts we’ve
just had – it’s been a little Biblical here lately). If I had to guess I’d
suggest that perhaps it’s to do with the MSM’s expectations. Brazil had big
floods only last year, so it’s thought of as something that happens there. But
Australia? Not only do the locals speak something that sounds like English and
obligingly selected a useless cricket team for the Ashes, but it’s supposed to
be a dry country with dusty red soil nearly everywhere. Everybody knows that
because it was on Crocodile Dundee. And people go there on holidays and
everything. The reality – that between the dry times Oz can get some
impressive floods – doesn’t meet with the expectation, and perhaps that made
it newsworthy. Still shouldn’t have knocked the greater tragedy in Brazil off
the front page though.

“it’s supposed to be a dry country with dusty red soil nearly
everywhere. Everybody knows that because it was on Crocodile
Dundee.”

That’s it, in a nutshell. The fact that part of it is actually rainforest
would be met with incredulity by most ‘Mail’ readers.

And most ‘Guardian’ readers, but because they’ve seen ‘Rabbit Proof
Fence’ instead….

It’s coz we as a nation have many relatives in Australia. Mine are in
Cairns, Meblourne and Sydney (I bet that’s a surprise). Plus some others in
Rotarua, New Zealand. and the floods were severe if not extreme!

Anna, great minds etc. My post will be published tonight. Yes, the coverage
has been shocking on the media.