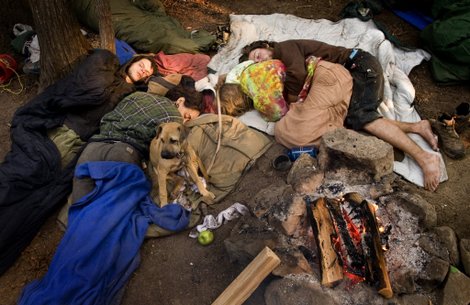 The tree huggers can hang their heads in shame. Humble pie is on the menu for some months to come.

The devastating forest fires in Israel before Christmas killed 42 people and destroyed a 15,000 acre swathe of the Golan Heights natural vegetation – for the next 30 years. Scores of rare turtles, snakes and lizards were consumed in the fire, irreparably damaging the eco-system.

When the fires broke out, there were eager fingers pointing the blame. The Israeli’s traditional enemies were quick to exploit the media opportunity:

For the third day in a row, the Israeli occupation authorities continued to deliberately set fire in Golan, causing great conflagrations along the ceasefire line as part of their daily hostile policy. In a statement to SANA, Governor of Quneitra Riyad Hijab said the continuing Israeli practices of setting fire in Golan will damage its environment, adding that they manifest Israel’s persistence in stealing Golan’s resources such as water, uprooting trees, earthmoving and burying nuclear waste.

New band wagon jumpers were not far behind; Greenpeace had also spotted the opportunity:

Greenpeace wishes to emphasize that this fire is a direct expression of the effects of climate change and global warming which threaten us all.  Climate change is already here and it is taking a heavy human toll! Israel must take this warning sign seriously and take immediate measures in order to eradicate the effects of climate change.  Israel must cancel its plans to construct another coal plant, reduce use of fossil fuels, and realize that we are dealing with an international struggle.

It seems that a Greenpeace sponsored ‘Rainbow Festival’ was taking place right in the centre of where the conflagration had started – could it be the tree huggers themselves?

we drink some tea, meet some people, pet the donkey some hippie from Turkey had bought, relax and have a good time. that evening ari and i headed off to check out the big bonfire near the woods where everyone else had set up camp and ended up there during the food circle. it was cool cuz a Yemenite jew sang some prayers and we shared a bowl with this dirty hippie and ate with our hands.[…] sometime during the night it started pouring, and we were glad to have the shelter of the welcome tent.[…] I went on a hike for a couple of hours to meditate and eventually came upon the area where the bonfire was last night and met this guy named Aharon that had traveled through India. He asked me to join their discussion circle which was probably the highlight of my rainbow experience. we passed around a talking stick (the “native american way” according to the crazy british guy that ended every sentance with “peace and love man”)and Aharon sang me a song about how you can’t learn about life in school while this other dirty dirty man tried to convince us to burn down the field so the children could play and we could dance. we then had to pass the stick around dicussing why we thought that was a terrible idea. After passing around another joint, we all held hands and said “om”[and om and om it grinds relentlessly for another God knows how many pages…….]

Eventually, the culprit was identified……

The cause of this particular fire was, sadly enough, the good intentions of a participant in the Rainbow Festival that was being held at the site. For ecological reasons, she burned toilet paper she had used so as not to leave it ito nature, and in normal circumstances, that would have been the thing to do. However, due to the strong winds and the unseasonable hot air, the dry grasses caught on fire immediately, and the fire spread in four different directions simultaneously.

*No Polar Bears were harmed during the writing of this post.

But then again, so did this one!….

It made me laugh.

Disaster would have been avoided if the arse-wiper had adopted the practice
common among moslems (and others too, I expect) of washing her botty rather
than using a bit of paper to smear the stuff about!

So I’m thinking, is there perhaps a metaphor here about windmills and
soap-dodgers?

“the fire spread in four different directions simultaneously.” Under the
current laws of physics, which the traditionalists among us regard as pretty
much immutable, the only way for a fire to do that is with a strong draught of
air from directly above the fire source, blowing vertically downwards. Perhaps
Gaia farted?

“For ecological reasons, she burned toilet paper she had used so as not
to leave it ito nature, and in normal circumstances, that would have been the
thing to do. However, due to the strong winds and the unseasonable hot
air, the dry grasses caught on fire immediately, and the fire spread in
four different directions simultaneously.”

If they were plonked in the middle of real country wildness they wouldn’t
be able to survive beyond a few days as they wouldn’t have any survival skills
and being vegetarian would starve in a week or two.

“Due to the strong winds…the fire spread in four different directions
simultaneously” – utter bollocks, of course. Re-reading this description does
not improve its sense.
As others have noted, burning toilet paper is not
“the thing to do” in any circumstances, but especially not in strong winds
(which were blowing four ways at once).
The weasel word is “unseasonable” –
there’s your green, Warmist agenda neatly encapsulated in one word. They never
give up pushing this crap. Unchecked, eco-mentality will destroy
civilisation.

“… she burned toilet paper she had used so as not to leave it ito nature,
and in normal circumstances, that would have been the thing to do. ”

That’s a load of crap, if I may say so. Poo and paper are both completely
biodegradable. Wild campers bury it so as not to offend subsequent visitors or
attract animals, not because it will last unchanged into the next century. And
burning it? Well, the paper will burn, but the poo won’t, and all you
will have left is a turd in the middle of a bit of ash. How that is
environmentally-friendly I don’t know.

As for it being “the thing to do”, well, that’s bollocks too. I have never
ever heard of a camper burning toilet paper. It’s unnecessary,
impractical, messy and – as we have seen – a serious fire risk. No wonder you
won’t find anything like it in any of the how-to books, from Baden-Powell to
Bear Grylls. I think they’ve made that bit up.

And since when is “leaving it to nature” a bad thing anyway?

Green method, plop, set fire to thousands of acres of of scrub and
forest.

Answers on a postcard which is the least green method

There’s a moral in there somewhere. I just wish I could figure out what it
is.

Hmm. It could be something to do with Trees and Matches.

Nutters, the lot of them. Unfortunately dangerous nutters too.

Oh, it is, it is !  The problem lies not in the paper but in
the interminable stream of apparently indestructible faeces that issues from
environmentalists.

An interesting point :  most, if not all, of those human
decedents were there only because helping to fight the fires.

Heehee, this is too good to be true!

Well as long as you’re happy I imagine the death and destruction involved
in this incident are probably a small price to pay.

Thanks, Slop. I was a little unsure myself, so your approval means a
lot to me. x