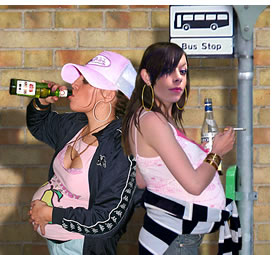 If you are the manufacturer of a product â say, for arguments sake, to forecast the weather â and claimed 99% accuracy, then after selling 1,000,000 examples of your product, you would be exceptionally pleased to find that your product had only failed to successfully forecast the weather in 594 cases rather than the expected 1% or 10,000 cases, would you not? You might even think that you would generate some positive headlines â âweather forecasters achieve incredible 99.4% accuracyâ â or something along those lines followed by a resulting boost to your sales.

Not if you are the manufacturer of an âemotive productâ.

Implanon invented a synthetic progesterone implant which could be inserted under the skin and claimed a 99% success rate in stopping pregnancies for up to three years at a time. No more âremembering to take the pillâ, no more âself denialâ if you didnât want to get pregnant. No need to take responsibility for yourself â the government would inject you with an implant and you neednât give the matter another thoughtâ¦..

This week it was revealed that more than 500 women in the UK fell pregnant when they thought they were 99% safe. They were using a hormone-releasing contraceptive implant, which should have given them no cause for anxiety for three years at a time.

Lo, they were â99%â safe, in fact, better than 99% safe, but that has turned into thoroughly negative headlines for the manufacturers. Those â500 womenâ were over a ten year period, I donât suppose they were thrilled to find themselves the lucky winners of the 1% failure rate, since they presumably didnât want children at that time, but it is hardly a failure on the part of the manufacturers.

The apparent failure of Implanon, until last October the only contraceptive implant available in the UK, is a blow to family-planning advisers and campaigners.

In Australia, where a survey was carried out of a similar product, 200 pregnancies were said to have occurred using Implanon â of which a quarter of the women were found to have already been pregnant when the device was fitted, and 127 of them had had the device fitted incorrectly. Neither situation should result in bad publicity for the manufacturer.

Ex-Public Heath Minister Gillian Merron is derided for having âtalked upâ the product when it was announced that the government was investing Â£20.5m in a scheme to give the implant to young girls and reduce the horrendously high rate of teenage pregnancies.

Regarding the failure rate when the implant is incorrectly fitted â this is apparently because ânot all [nurses and Doctors] have taken the time or the trouble to get trainedâ â an entirely negative attitude in itself.

Doctors in Bradford have warned of the dangers of women panicking and stopping using the device as a result of these negative press reports â I am interested in why this story has been so negatively reported, what is the agenda here?

Why wasnât this an âImplanon turned out to be even more successful than claimedâ story?

OOOOOOPPPPSSSS. Apologies all around, only reason is I am very busy
renovating a workshop I have recently bought and my days of working 10 hours
finished when I emigrated, a touch tired methinks, humble protestations to you
Dioclese.

Seems to me that the error rate is likely to be vanishingly small â itâs
not just that itâs less that 1% but that most of those failures will be down
to human mistake. As you note some doctors will fit it wrong (âtis a terrible
thing I know but sometimes these folk get it wrong) and, of course, there are
others who canât count and take risks at the end of the three months.

The point you make is however a good one â but I do not know how we will
ever change peopleâs irrational behaviour. Itâs not simply a question of
lacking numeracy skills â I suspect the journalists are perfectly able to
understand the maths. But remember 500 girls are pregnant who thought they
were safe and that is a big number!

Dioclese, perhaps taking the mote out of your eye first might be a good
idea. When my mother passed away nearly 15 years ago, my work colleagues
reckoned I was on another planet for at least a year and I certainly was not
particularly calm or affable, I was in a different mood every few hours,
making being in my company even less bearable than normal . When someone is in
suffering and partly bares their chastity to reveal it, showing some
compassion garners more respect than a holier than thou attitude, in respect
to what ever you believe in.

Mummy X,
What a wonderful apology! I lost my mother twenty years ago,
and the wound never completely heals, so itâs no wonder you are still sore
after just eighteen months. I didnât react with quite such anger, as I was
planning my wedding when it happened, so had something happy to look forward
to and a lot of support from family and friends. I hope you have the support
of people who care about you in real life as well as those here in blogland.
It would be good to hear from you and know how you are getting on, so I hope
you take Anna up on her offer of a guest post. All the very best, and be kind
to yourself; you are a great blogger and we need you back.
(Anna, you are
such a lovely raccoon!)

Might be less of a problem if we acquired some morals?

I hope you will accept my apologies and my explanation as to my
increasingly erratic and annoying blogging behaviour.

As you know I lost my Mum in July 2009 and whilst rocked to the core at the
time I figured I would get used to it. Sadly, I havenât. Whilst dealing with
it at a top level I failed to address my underlying grief and anger at her
sudden death. As a consequence I have found myself growing more and more angry
as the months have gone by. And to my detriment, and that of others I have
vented that anger in the blogosphere whilst failing to address it in the real
world.

After my unwarranted (2nd) attack on you I went back and re-read a lot of
my posts and what I discovered wasnât very nice. In short I have become a
nasty, narrow minded, angry blogger that is more than happy to go pick a fight
with anyone so I can vent my anger. Itâs shit and it makes me an arsehole. So
I am taking some time out to address the underlying issues that I really need
to deal with.

The blogosphere is a brilliant place to hide from what is going on in the
real world, and that is what i have been doing this last 18 months. So I am
off to sort my shit out. I hope to return someday, if you and all the other
bloggers will have me back. The urge to blog is still strong but until I can
stop being such a freaking twat itâs probably best for all of us that I step
away from the keyboard. If nothing else it will free up my anonymongs and
trolls and allow them to seek fresh feeding grounds elsewhere.

p.s Sorry for sticking this in the comments section, I have deleted my own
blog so have no way of letting you or others know that I have disappeared
because I am a twat and that I am very sorry for being a twat!.

That is an incredibly gracious and, as always, beautifully written
apology.

Congratulations on being so magnanimous so very publically.

We all look forward to your return of course you will be welcome when you
come back â you can even do a guest post on here if you want.

We underestimate the depth of grief involved in losing our Mothers â even
those of us who are so estranged from them that we could pass them
unrecognised in the street still grieve, so I cannot begin to imagine the
pain and emotional upheaval in losing someone you really care about.

Good luck in 2011 yourself, be good to yourself, and come back soon. The
blogosphere has lost too many good writers, and the women are especially
valuable â they provide a foil for the foul mouthed men. Er, sorry, just
remembered who I was speaking to, scrub thatâ¦â¦but you did do it with style
and passion!

Seconding what Anna said â looking forward to your return. And I canât
speak for any other blogger, but drop me a line when that happens, and
youâll go straight on my blogroll.

Donât worry about your anonymongs and trolls. Theyâll find a good home
on Twitterâ¦

Relying on an implant rather suggests these young women are not aware of
âsafe sexâ. I wonder how many of the (less than) 1% pregnant & (over) 99%
have contracted STDs. Schools sex education used to recommend a barrier method
of contraception for this very reason â perhaps this has been overlooked by
taking the easier route of an implant.

It should have been pushed into their heads that if they relied on the
device working then the risk of that 1% required them to use an additional
birth control method. Itâs not like itâs a life and death choice (well
actually it is!) like deciding whether or not to wear some safety harness or
not whilst bungee jumping.

The only safe contraceptive is no sex. I suppose they donât tell them
that these days.

JuliaM & Richard B are right of course. Could there also be an element
in there of not wanting to ruin anyoneâs chances of juicy litigation, and thus
keeping the story alive?

Because the general public donât understand statistics. To most people,
â99% likelyâ means âcertainâ. So a failure rate of 1% is equivalent to
âdoesnât workâ. Itâs just simple ignorance. Do they teach probability in Maths
these days? Chances itâs considered too difficult for young people, or not
ârelevantâ to their lives: 1.0.

The Met Office have discontinued those long-range forecasts for this very
reason. When they said â20% chance of rainâ and it rained, people
complained.

I disagree. Itâs the MSM, papers, TV and especially the BBC. Media types
pride themselves on being bad at maths and science. And as JuliaM says they
love a negative angle on almost anything.

As for the weather look at the way the BBC gave up proper forecasts with
isobars on the maps. If the dumb donât get it tough, donât dumb down the
rest of us.

They donât seem to teach maths these days. I went on a evening NVQ1
woodworking course the other year and there were a number of questions in
the simple exams to do with simple maths and percentages. Like what is 10%
of 100.

To be honest, given some of the little scrotes I have interviewed over
the last few years, I donât think they teach maths at allâ¦