‘Tis our Blogiversary today. We are two years old.

I truly didn’t think ahead two years. There was no master plan, merely a terminal boredom with the forum wars and most of all with the forum furies. If I couldn’t find a forum to make the odd sardonic comment on the fat controllers who rule our life from parliament without getting enmeshed in conspiracy theories, bogged down with circular arguments, or moderated for not following the prevailing view of the owner of the forum – then I figured I was not alone.

I wanted a virtual pub, an arena where you could eavesdrop on the debates; join in when you wanted; learn something new every day; keep the brain cells ticking over; and laugh uproariously at the antics of those who consider themselves our betters.

I wanted to keep alive my love of the English language, even as I mastered French. I wanted to remember the best of England, even as I fled its shores. I wanted to entertain and be entertained in a land where I knew no-one and doubted that I would ever learn the language sufficiently to joust and pun, explore double meanings, and reminisce over a way of life that was once acknowledged as the finest in the world.

I wanted to be argumentative and challenging; to explore other viewpoints than the prevailing wisdom; to learn the answers to questions that had always puzzled me.

Not that ‘knowing nowt’ had ever stopped me in the past from trying something new. There is a peculiar freedom associated with starting an enterprise that you have zero knowledge about – things can only get better, for a start, and you have no fear, for you are ignorant of the pitfalls.

So I blundered into a new career as ‘Blogger’ – although I see myself as head barmaid – starting the conversation each day when the bar is still chilly, there are too few customers to create an atmosphere, no one has put anything on the juke box yet. Each blog post is the equivalent of the hairdresser’s ‘have you booked your holiday yet?’ – something to break the ice and get everyone talking.

And do you ever talk! I have been educated and entertained in equal abundance. Google became my friend, to understand the references that I had no knowledge of. I have learnt more in the last two years than I had in the previous 60. I’ve been corrected and sub-edited on a daily basis – for which I am eternally grateful. I have laughed till I cried at some of the exchanges in the comments. I’ve made good friends amongst people I might never have otherwise met. I’ve been rewarded by a standard of debate rarely seen outside of universities – and, I suspect, rarely there these days. I have been overwhelmed when requests for help have resulted in an outpouring of highly qualified assistance. I have been humbled when you have stepped forward to sort out problems – Sheila Martin, Nick Hogan, and Steven Neary – that I had described on these pages.

There have been down days too, when the technology has nearly defeated me, when my eyes were red raw from reading up on slow SQL queries; when that destructive band of negative individuals known as trolls decided that this blog was their target practice for a while; when I was ill and really didn’t feel like venturing outside of the duvet. They passed, chased away by the many e-mails from that band of folk who have become friends – the commentators on these pages.

I have been tagged with the ‘my blogging desk’ meme – and ventured out to see the response of others. Subrosa – what did I expect? A purposeful desk of style and elegance, immaculately maintained, stylish, efficient. Just like her blog. DearGodMakeItStop, managing to entertain us all and hold down a full time job, four computer screens! There’s multi-tasking for you. ManWiddicombe, surrounded by technology. The Filthy Engineer, living up to his name (that is one impressive mess!).  Julia M – she took that picture the day she got the desk, no one can be that busy and that tidy!

Fuelinjected Moose – whoa technology central! Huh! Outdone by Beware of Geeks Bearing GIFs – great name and great taste in blogs that he was reading when he took the picture – I see Anna Raccoon on the screen there! Wrinkled Weasel, who seems to have started this meme, cops out with a picture of G B Shaw’s study, not a bad thing to emulate – but you all seem to have dedicated yourself to blogging in a way that my haphazard approach can never emulate.

A lap top, sitting to the right hand side of my inspiration pit – only accessed when I have spent enough time stabbing a needle through the holes of my tapestry, in between making the bread, cooking dinner, endless cups of coffee and entertaining visitors…..technology central it is not.

In the summer the lap top sits on a table in the garden, and is attended to in between snipping bits off various plants, and cleaning out the mill stream….. 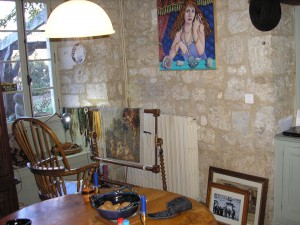 And a belated Happy Birthday from me as well. It has been a joyous thing to
be part of it and I will be able to see it grow up further.

A blog can be a hard think to keep going. My first one is now of school age
but the new one has only just arrived. I can only hope I manage to keep it
going given the likely sparse rate of posting.

I’m going to try to say ‘congrats’ while I can – I’ve been stabbing away at
the ‘connect-thingy’ for at least 45 mins already and for reasons known not at
all to me, FINALLY I can get through …… I’ll make the most of it while it
lasts.

So, hurrah for being 2! I can’t believe it, although if I press both my
brain cells together, I can really.

It sounds like a really nice place, your blog, where all-kinds-of-everyone
can dib in. Let’s keep it going and who knows? One day there may be a zero
after the 2!

and thanks for not giving up. There are too many disappearances these days
– it was great to see you return and launch the bar chat once again!

Love the tapestry, the chair and your prose.

I like the “head barmaid” image. You do have a knack for starting good
conversations.
You know what you are? Bloody unpredictable! x

I must say I was very pleased and relieved when you reappeared from that
brief darkness. Keep up the good work – that goes to all the contributors
here, well done.

Felicitations Anna. You’ve been cracking on with your tapestry. It’s
looking fantastic. Do post a photo when it’s finished.

I fully understand your frustration about the technology. I’m not keen on
laptops because I’m useless with these finger pads and also print seems to
shrink in size on them. It’s all Bill Gates’ fault. Then again I can’t seem to
acquire your technical skills. It’s a case of in one ear and out the other,
but stupidly I persevere in the faint hope that one day a beacon will shine on
this screen and provide me with an insight to HTML.

Congratulations Anna. What a brilliant and talented 2 year old you are!

Oh this is such THRILLING news! Will there be a CAKE! Tra La La!

Sister, if you are serious in your intention to lose weight, you have to
stop talking and thinking about food all the time. Say a Hail Mary or
something……

She’s got totally out of it on rum and Coke now. It’s so
embarrassing…!

Love it, Happy Birthday one and all!
I have a 2 yr old daughter and she
obliges with all of the above phrases. She is also very fond of spinning
around in circles until it makes her dizzy and she falls over. Here’s to
falling over and getting back up again. Oh no, I feel a chumbawumba moment
coming on…..

Happy Birthday. Interesting that many bloggers smoke or like ashtrays at
least. Fascinating incite to people that make me day. Thanks.

Ah, but … as a raccoon, reaching your second anniversary brings you just in
to adulthood.  As a female yearling you might have bred — I know from
something read here that you have at least one baby coonie — but now you
seriously need to start looking for a den … and fending off the attentions of
all the unwanted frisky males.

Still, look on the bright side :  the pregnancy lasts only about
two months.

Keep going – you talk too much sense to give up!

Ed P,
Needling – the technique is the same……

Ah – that clears my confusion as well

Bon blogiversaire! And what a lovely room; no wonder you’re so inspired! My
laptop sits on my lap, and I sit on the sofa to comment, as our several desks
are covered by dear husband’s computers and “stuff”, and the quirky wireless
in this house manages to by-pass the kitchen table.

My workspace at home is more cluttered and untidy than I dare describe,
so out of self-respect I won’t supply a picture. I actually managed to post
a recent Cat blog using my LG Viewty, but although the Opera browser
provides an on-screen keyboard, I won’t be doing that very often..

Hmm. I may have become confused (no real change there, then), but do I
gather from the photo that you’ve developed a way to sew a blog, Anna?

Gord Bless ya, Miss Anna. Yor a right diamond geezer and no mistakin’.

Sorry come over… all Dick Van Dyke. (now that would be a story)

Happy blogiversary! Here’s to many, many more!

Well done Anna ! A pat on the back for providing a spot where so many
congenial folk pass by.

I’ve been shamed into tidying my desk up. Just a teensy bit.

Careful. You’ll never find anything if you tidy up.

Closely followed by, “Are we nearly there, yet?”

What age does ‘I want a drink’ start?

‘cos I do – maybe I’m a fast developer in that department…..

Sounds more like the onset of teenage blogging – a whole new
dangerous and exciting phase.

(Fortunately, there’s nobody to say, “You’re not going out blogging
dressed like that”. Well, not yet, anyway. Ah, freedom….)

Oh no! the terrible two’s! Will the blog start running about
uncontrollably, demanding chocolate and cheese, crayoning the sofa and leaving
pain on the carpet?
Perhaps not.
Happy birthday
G

Felicitations et bonne anniversaire! I love the blog and the repartee
party. Can we now expect to see ‘The Terrible Twos’ in progress? (Just
wondered..)

We are just learning to walk Caedemon! (Late developers!)